My online impostor: When that Facebook profile isn't you

For years, I was plagued by fake social media profiles that humiliated me. Who would stalk me this way -- and why? 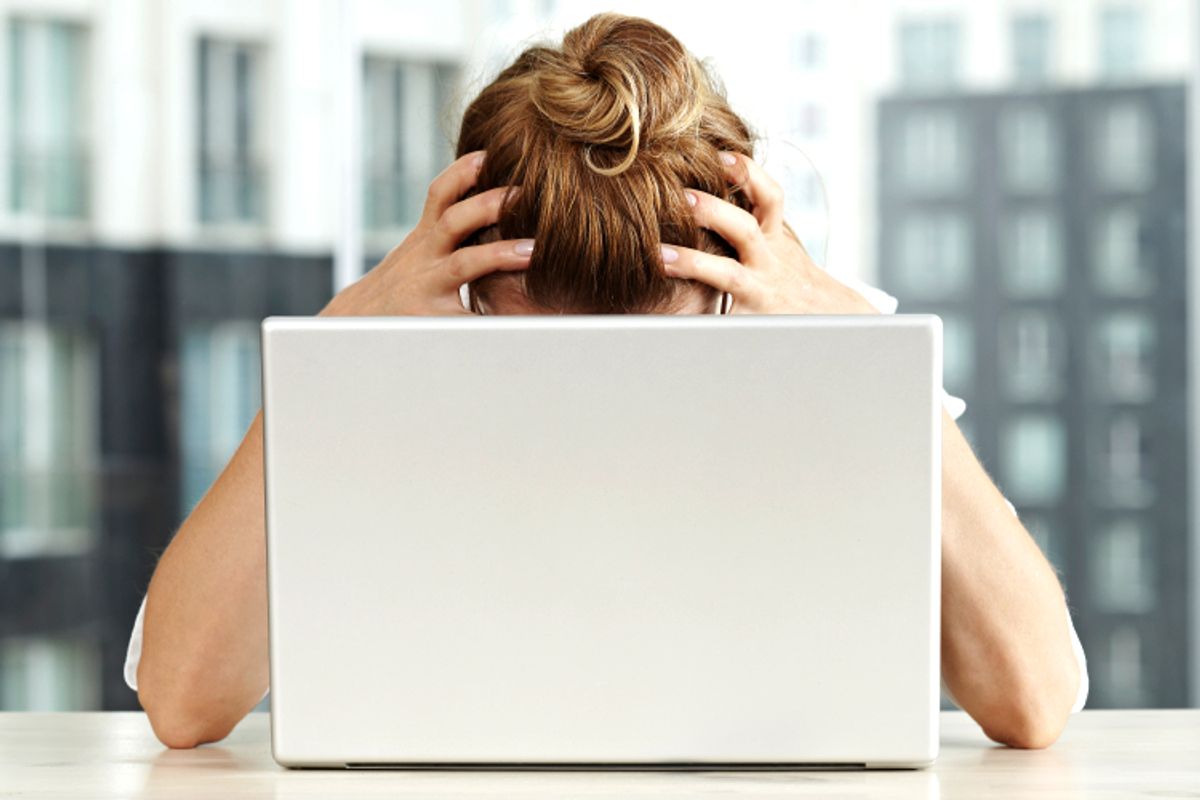 Recently I received an invitation to connect on LinkedIn – from myself. Anna Katzen wants to connect with you, the message read, accompanied by a picture of me reading a copy of Russian Playboy when I was 17 years old. The photograph was taken in 2006, just months before I discovered that I was being impersonated and stalked online. The photo, along with dozens of others, was lifted from the LiveJournal blog I kept as a teenager. At the time, it did not occur to me that these images could wind up on a professional networking website – or that such a thing even existed. And why would anyone want to sabotage me, anyway?

I opened “Anna Katzen’s” page with trepidation. “Oh my God! Fuck the learning environment!” the impostor wrote in their Summary section. Listed was my complete educational and professional history, from my high school dishwashing gig, to the title of my master’s thesis, to the NGO where I was currently working in New York City. According to the profile, my skills included dissertation editing, teaching and, mysteriously, baking. And there, hovering above all this mess was “me,” a fresh-faced youngster brandishing Playboy. (I was reading it for the cupcake recipes, I swear.)

I have been impersonated and harassed online for nearly eight years, living alongside contemptible caricatures of myself as rendered by an obsessed, mentally ill stalker. At first, I tried to fight back, contacting website administrators and law-enforcement agencies. Then, when my efforts to quell the person’s behavior only incited them further, I hid. I legally changed my first and last names -- in fact, all names have been changed for this piece -- and I eschewed all social media platforms, and convinced myself that I deserved it. For an entire era of my life, my public identity did not belong to me. But to whom did it belong? And why?

I was 18 the first time I Googled myself to find pages upon pages of fake social media profiles, blogs and forum postings using my pictures and full legal name. The year was 2007, before it became customary to warn teenagers about their online image, and well before most states had legally recognized cyberbullying and cyberstalking. It was before the suicides of Megan Meier, Amanda Todd, Tyler Clementi and others – tragedies that revealed the tremendous, devastating power that the Internet holds over young people’s lives.

In my case, the perpetrator’s ammunition of choice was my LiveJournal account, a semi-public blog that I created at age 14 as a repository for high school grievances, daydreams and photos taken with my best — and only — friends, Brian and Gwen. The content was innocent. In one picture, Brian and I donned vintage headgear for Gwen’s photography project; in another, we performed a play we wrote together in French. For Brian and me, LiveJournal was also a forum to learn and practice foreign languages in hopes of someday moving abroad.

After I moved to Russia at age 17, my audience grew precipitously as I chronicled my misadventures in the land of despair and track suits. I connected with hundreds of people from around the world and began to see myself as someone who was interesting, likable and even attractive.

As absurd as some of these representations seem, many people believe they are real. I have been asked countless times why I haven’t added someone back on Facebook – I don’t have a profile. More recently, my piano teacher remarked that he liked “my” blog posts. The ones about the probes, or about my lifelong dream of rearing small children? I didn’t have the heart to ask.

Who could possibly do such a thing? I wondered. I had no known enemies, nor spurned lovers. Moreover, while the vast majority of my LiveJournal friends were Russian-speaking, the impostor clearly possessed a native, albeit idiotic command of English. I could only assume that I had been targeted at random. My friend Brian agreed. “You know, I got some weird messages about you from this Australian girl on LiveJournal, but I think she deleted her account. It could be her,” he warned me.

I shut down my blog, permanently deleting years of my writings. I severed 90 percent of my online relationships. My parents spent their days contacting website administrators to remove the bogus profiles, while Brian, now a computer science major, volunteered his technical expertise. But, as soon as one profile was removed, three new, more malicious ones emerged in its place. And unlike me, the culprit was technologically savvy, hiding behind fake IP addresses and proxy servers.

Confounded and depressed, I returned to the states where I could better manage the rapidly intensifying ordeal: At its height, there were 10 full Google pages worth of fraudulent material. “Just lay low, don’t post anything online, and the person will soon enough get bored and move on,” my parents suggested. And so for nearly a decade I coped through avoidance. I told myself that I bore no relation to that puerile, self-absorbed dough-face. I became, in effect, her antithesis – reserved and self-loathing– the type of person who intentionally tries to go unnoticed in life.

Then, in 2008, I legally changed my first and last names. I told only Gwen and Brian about it, though I didn’t give them any details. Not long after, Brian connected me with a soft-spoken girl I knew casually from high school. “Emily really wants to get coffee with you,” Brian told me. “She’s just always talking about how cool you are and how much she admires you!”

“Yeah, she won’t shut up about how cool you are, and I think she needs some advice.”

Emily and I met for coffee. Given the fact that she did not have access to much of the material and information used by the impersonator at the time it was posted, I felt safe telling her about my name change.

“Oh, that’s such a pretty name!” she said. “How do you spell it?” She instantly produced a piece of scrap paper and a pen. I scrawled down my name absentmindedly. “Cool, I like that spelling,” she said, slipping the paper into her pocket.

Shortly thereafter, a fresh crop of blogs and social media accounts emerged using my new name. Logistically, it couldn’t have been Emily, given her lack of access to the original pictures, and I refused to believe that either of my two best friends could be at fault. But things had changed: Around the same time that my stalker saga began, Brian cut off communication with Gwen. “She’s a liar – you can’t trust her with anything,” he said, offering no further explanation. As time went on, Brian acted increasingly unwell. He dropped out of college, broke up with his doting long-term boyfriend, and abandoned his own dreams of living abroad. He stopped showering, spent entire days using drugs at his laptop, and joined a conspiracy theory club. Gwen and I remained close, while Brian drifted further from reality. While my parents were already convinced of Brian’s guilt, I could only remember the good times we shared together: studying abroad in France, writing skits for our AP history class, and dancing until 6 a.m. at Scandinavia’s largest gay club.

Four years ago, halfway into the ordeal, I received an email from Brian, who had just been released from a psychiatric hospital after suffering a mental breakdown:

I don’t even know if it’s wise to be writing to you…Who knows who is a friend  and who you can trust? Who knows what secrets a person harbors, what emotions they keep deep inside? Who knows what plots friends create together for  “friends?” Reply back…I will answer just about anything, hoping you will do the  same.

The answer seemed obvious now: the false clues, the computer expertise, Brian’s eagerness to help in the investigation and the fact that he excommunicated Gwen while remaining my confidant. As for Emily – she appeared to be a scapegoat, either sent to do Brian’s bidding or to throw me off the trail. (In retrospect, I should have known better – nobody thinks I’m “cool.”) “I’m really sorry that you’ve been experiencing problems with your mental health,” I told him, “but I honestly have no clue what you are talking about. Please take care of yourself.” That was the last time he and I ever communicated.

I used to think that the universe had delivered me this fate as an exercise in humility. By rejecting the cultural zeitgeist of oversharing, I hoped to become more humble, authentic – even Zen-like. But try as I might to detach myself from my foolhardy past, its vestiges kept coming back to haunt me. Anna Katzen wants to connect with you, I read over and over again, studying the bizarre details of the profile. Well, if you can’t beat her, join her, I decided.

Last summer, I quit my nonprofit job to become a webcam girl – one who strips and performs online sex shows for a living. Counterintuitive as it may seem, exposing myself on my own terms actually empowered me to take control of my online image in a new way. After years of hiding, I finally broke my digital silence to show, and write, about intimacies I never imagined: dancing on camera for strangers, selling X-rated videos, and the freedom of saying fuck it to my own expectations. In doing so, I also reclaimed several of the terms I once wore like scarlet letters. “Slut” loses its shameful charge once you have proudly imprinted it onto your own ass with a special leather paddle.

Of course, getting naked online is hardly an advisable solution for 99 percent of people who have suffered from cyberstalking and harassment, nor is it an attempt to trivialize the psychological and emotional distress these injustices engender. Fortunately, with the proliferation of Web-based bullying, stalking and impersonation, lawmakers are finally taking note. One day, I even hope that I, too, will be able to obtain the hard evidence required to definitively identify my impersonator and hold him or her accountable. Until then, while I may have wasted eight years of my life worrying about my indecent online image, the newfound irony of the situation is mine to keep forever.