Selfish mourning on "The Good" & the "Dead"

This weekend's "Good Wife" and "The Walking Dead" season finale focus on coping with death. 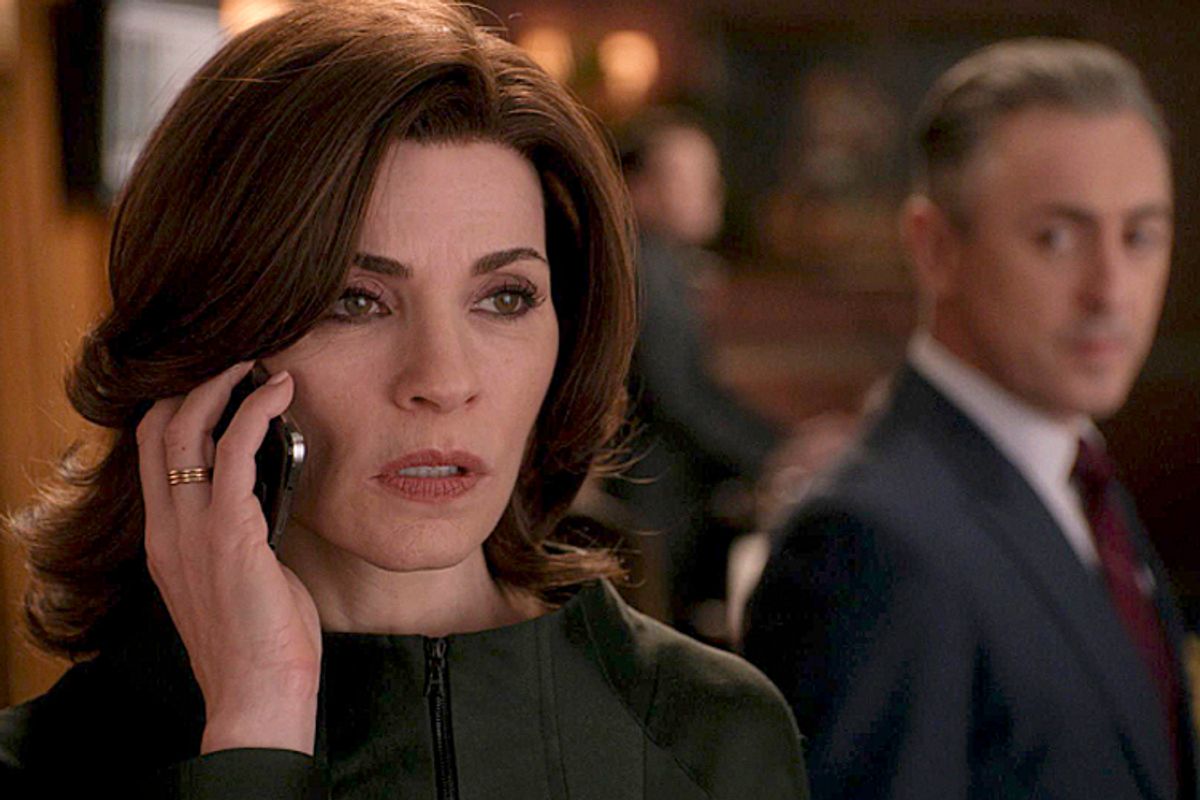 Sunday night was the season finale of “The Walking Dead.” As expected, the separated factions of Rick Grimes’ wandering band of zombie apocalypse survivors were reunited. The spoiler is this: The joy and relief did not last, as all were deceived and imprisoned by the mysterious inhabitants of Terminus. That same evening, on “The Good Wife,” rivals and allies of Lockhart/Gardner struggled with the news of Will Gardner’s sudden, untimely killing.

Both episodes dealt with the aftermath of violence. “The Walking Dead” opened on its primary hero, blood-smeared and nearly catatonic. Later, we find out that he is recovering from an incident in which someone else’s shocking brutality was met and trumped only by his own. “The Good Wife” was a beautiful orchestra of grief, with all the major characters processing tragedy in a variety of ways. (‘Twas the stuff of Emmy Award nominations, to be sure.)

Violence, death, grieving – these are all hallmarks of drama. A more interesting and subtle coincidence is that both shows dealt with the notion of self-image and how previous crimes and/or offenses affect the way a person views him/herself. On “The Walking Dead,” both Rick and his son Carl wrestled with the idea that they had become monsters as a result of the necessary actions they’d taken to survive. True to her Bob Marley-style ‘do, Michonne issued a very personal speech declaring that individual redemption was possible for all no matter how many beheadings one had committed in the name of seeing another day. Rousing as this pep talk was, Carl did not seem convinced. Nor did Rick when similarly comforted by Daryl, who seems almost to have been serving penance for both himself and his dead brother’s past digressions. (It's worth noting that, in a rare moment of joy for the show, both Glenn and Lauren have their individual existences and purposes reaffirmed by the knowledge that the other is alive.)

“Good Wife” protagonist Alicia Florrick responded initially by simply being sad over the passing of her former co-worker/lover/friend. But upon discovering a curtailed voice-mail message left for her by Will, she became obsessed with knowing the circumstances surrounding the call. Particularly, she wanted to know if he died angry with her for either personal or business reasons, as if that would somehow implicate her in his death. This lawyer’s desire to be exonerated in a court of her own emotional making says a lot about how we personalize and internalize tragedy.

Alicia and Will have both wounded each other deeply over the course of this season. She was able to live with some level of guilt and/or responsibility as long as he was still standing, proud and defiant. At least professionally, the two had even come to some sort of mutual, scabbed-over understanding. But, as much as his shooting clearly had nothing to do with her, it shook her sense of self – made her question the choices she’d made regarding this relationship and more.

The proverbial knife in the gut of Sunday’s episode is the voice-mail message itself, a heartbreaking tease reinforcing the truth that, as much as she digs for clues, Alicia Florrick will never get any answers from a dead man. Even on “The Walking Dead,” where the deceased actually can rise, they almost never know what to say to make you feel better.