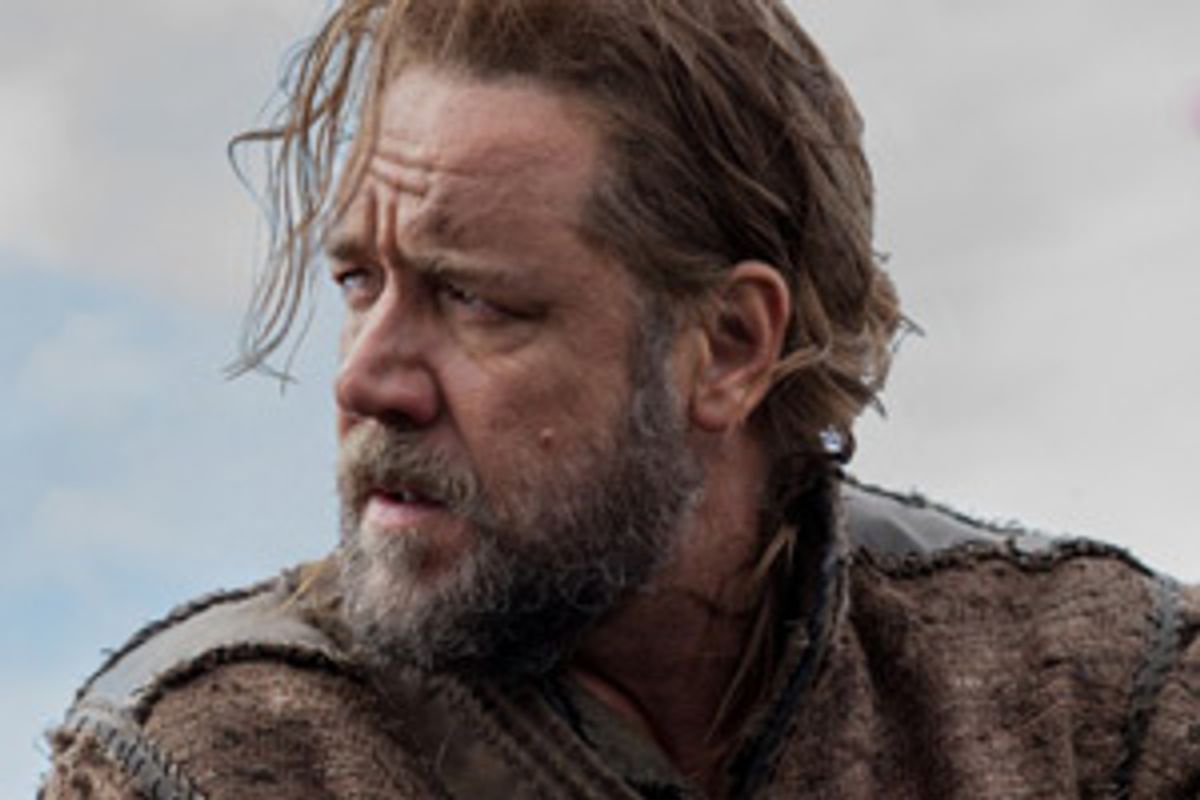 Paramount is promoting the heck out of its $160 million investment, cluttering television and the net with with ads showing Russell Crowe looking not like your average servant of God but like an alpha gladiator in macho drab leather vests and road warrior boots. But the studio could probably pocket its ad dollars and still make a mint.

"Noah," which Aronofsky (of "Black Swan" and "Requiem for a Dream" fame) has stressed is only "inspired" by the Biblical story, not a literal depiction of it (as if that were possible) is generating tons of free publicity. Why? The Faithful hate it.

In several countries, the United Arab Emirates, Qatar, Bahrain and Indonesia, the film is banned because it exists. Conservative Islamic law prohibits representing holy figures in art and entertainment. But UAE officials have also complained about "Noah" getting Noah wrong. The UAE's director of media content has said that the blockbuster has "scenes that contradict Islam and the Bible, so we decided not to show it." Al-Azhar, a Sunni Muslim Institute in Egypt, has also objected to the film, stating it would "hurt the feelings of believers."

Fundamentalist Christians are also incensed at the retelling of a tale of Genesis as a fable with fallen angels made of molten rock. But rather than ignore an IMAX-ready, CGI-laden popcorn flick in the hopes it'll go away, Christian conservatives are publicly condemning the film as a travesty and insult to God. Conservative talking head Glenn Beck, one of the few to excoriate the film who had actually seen it, issued this review: "It's just so pro-animal and anti-human. And I mean strongly anti-human."

The twittersphere exploded with "Noah" assaults, blasting its secularness, among other sins, days before the film actually opened. (See http://bit.ly/1dEkkRF).

Meanwhile, Faith Driven Consumer, a Christian consumer group, posted a survey that found that 98 percent of more than 5,000 people polled were unhappy with "Noah"--and here's the kicker--and other biblical Hollywood films.

That's perhaps the real story behind the backlash over "Noah": Just as any actor who loses or gains a ton of weight for a role is pretty much guaranteed an Oscar nod, any Hollywood retelling of a Bible story is going to produce an outcry and a surefire hit.

With that in mind, here are the top five films based on stories from the Bible that inspired a religious backlash and became media sensations as soon as or even before they opened.

This 1999 Horror film by director Rupert Wainwright starred Patricia Arquette as an atheist hairdresser from Pittsburgh who experiences the stigmata, or spontaneous appearance of crucifixion wounds on a person's body, in a way that makes her seem demonically possessed. Meanwhile, a Jesuit Priest (Gabriel Byrne) who works as a kind of Catholic investigator, examining claims of miracles, discovers a shady connection between the stigmata and a 4th century gospel condemned by the Catholic Church. He uncovers a plot within the Vatican to keep the gospel's truth on the down low, fueling the film's plot and the ire of Catholics, whose protests turned this B-movie into a media sensation for months after the flick was released.

The film was panned by critics, earning a 22 percent favorable rating on Rotten Tomatoes. Roger Ebert called it "possibly the funniest movie ever made about Catholicism--from a theological point of view." It was nominated for a Razzie Awards for Worst Supporting Actor (Byrne). And yet--"Stigmata" still made bank. Produced for $29 million, its controversy earned it a world wide gross of $90 million.

This 1999 satire on the Catholic Church and Catholic beliefs by director Kevin Smith follows two fallen angels (Ben Afflect and Matt Damon) who, through an alleged loophole in Catholic dogma, find a way to get back into Heaven after being cast out by God. Since God is infallible, their success would prove God wrong and turn creation (and creationism) on its head.

The film didn't make waves until post-production, when word spread in religious circles that the film contained an anti-Christian message. Eventually, Smith received over 30,000 pieces of hate mail--a lot for those pre-social media times--and several death threats. But controversy kept the film alive at the box office after critics excoriated the flick as a dud.

This 1979 comedy aimed for outrageous irreverence and succeeded in spades. Written, directed and mostly performed by the Monty Python comedy crew, the film explores the story of one Brian Cohen (Graham Chapman), a young Jewish man mistaken for the Messiah. Upon its release in Britain, the film was banned by several town councils, even in towns that had no movie theaters. It was banned for eight years in Ireland, for a year in Norway and banned outright in several American states. In New York, screenings were picketed by both Rabbis and nuns as lines to get into the movie spanned half a block.

2) "The Passion of the Christ"

This 2004 Mel Gibson project about the horrors Jesus Christ suffered in the 12 hours before his crucifixion received an avalanche of publicity thanks to pre-release stories that the film was anti-Semitic. (Recall that two years later, a drunken Mel Gibson disgraced himself on video with an anti-Semitic rant when arrested by Los Angeles Sheriff's Deputies for D.U.I. )

1) "The Last Temptation of Christ"

Martin Scorsese's 1988 take on a controversial 1953 novel by Nikos Kazantzakis tried to deflect what he and Universal Studios knew would spark sure-fire criticism from Christians for its portrayal of Jesus (Willem Dafoe) as a man subject to every form of temptation that humans face, including lust. Well before the film was finished, Scorsese did many interviews in which he stressed that the film was not a literal retelling of the Christ story, but a fictional representation. The film itself contained a disclaimer saying the same thing. No matter. "Last Temptation" was demonized before it was even finished and the world-wide protests against it were unprecedented.

During a screening of the film on Oct. 22, 1988, at the Saint Michel theater in Paris, a French Christian fundamentalist group launched molotov cocktails that injured 13 people, four of them severely, and nearly burned down the theater. The film was banned for several years in Mexico, Turkey, Argentina and Chile and continues to be banned in the Philippines, South Africa and Singapore. And while a critical success, the film's unavailability made it difficult for it to find an audience. Produced for $7 million, the film grossed under $9 million. Scorsese has said it found its audience on video, though even proved a challenge; Blockbuster Video refused to carry the film up until the video rental big box store went belly up.