Why Amazon's big TV announcement won't be a game-changer 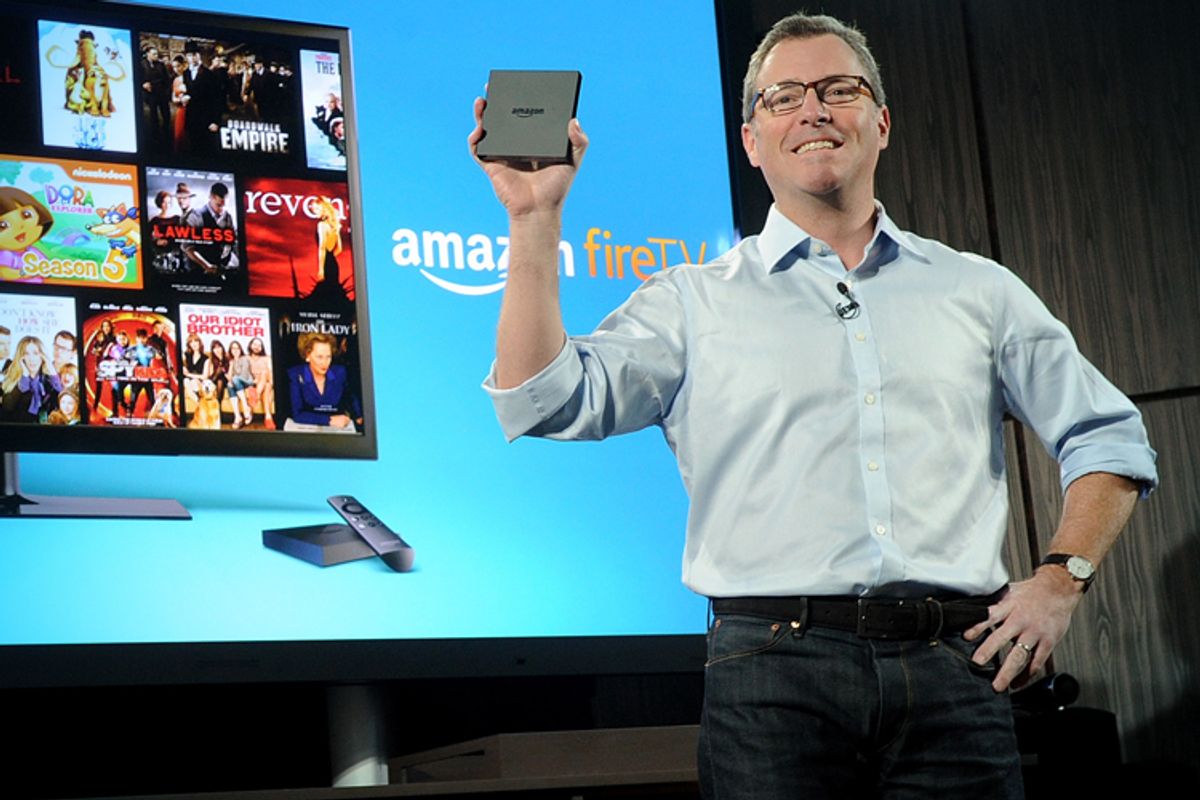 The "war for your living room" isn't particularly violent, but it is nevertheless a real thing. All the big tech players want to get between you and your TV. Microsoft has the Xbox One, Sony has the PS4, Google has its Chromecast "stick," Apple has its Apple TV. Throw in stand-alone players like Roku and the cable companies with their own set-top boxes and consumers have a bewildering variety of hardware options to choose from when they consider turning their TVs into Internet-connected streaming platforms.

And that was before Amazon opened a new battlefront on Wednesday with the Amazon Kindle Fire, a $99 streaming media box that executives promise will improve "search, performance, and gaming."

Early reactions questioned the price, which seems high for Amazon, and the lack of HBO Go (which is supported by Chromecast, Apple TV and Roku). But the real problem with the Fire, and every other gizmo currently available, is that it doesn't offer what consumers really want. The war for your living room is not a hardware problem. It's a distribution problem.

What we want from our TVs is what Amazon offers for books, and iTunes or Spotify, to a lesser extent, offer for music. Access to everything. Every TV show ever broadcast and every movie (along with everything on YouTube) ever made. We don't want to negotiate separate subscription fees for Netflix and Hulu Plus and Amazon Instant and, god forbid, HBO Go (a streaming service that still requires a cable subscription for eligibility!).

But we're not going to get what we want, any time soon, as Farhad Manjoo ably explained in a recent New York Times column. The rights to movies and TV shows are carved up in an arcane mess of long-term distribution deals that simply can't be solved by hardware, at least not in the near future. HBO, for example, simply won't allow it.

HBO and other premium networks have agreed to pay billions of dollars for the exclusive run of major studio films. HBO has said that, despite the cultural cachet of its original programs, movies are its most popular content; consequently, it has purchased rights to about half of all the movies released by major studios in the United States until beyond 2020. At least in this decade, then, a monthly movie plan that offers all of the movies isn’t going to happen.

Applying the metaphor of "war" to the struggle to accumulate customers of living room entertainment experiences is inherently offensive. But there's one way in which the comparison holds true. Like the recent military entanglements the U.S. has found itself mired in, the "war" for your living room can't be won by the application of better hardware.