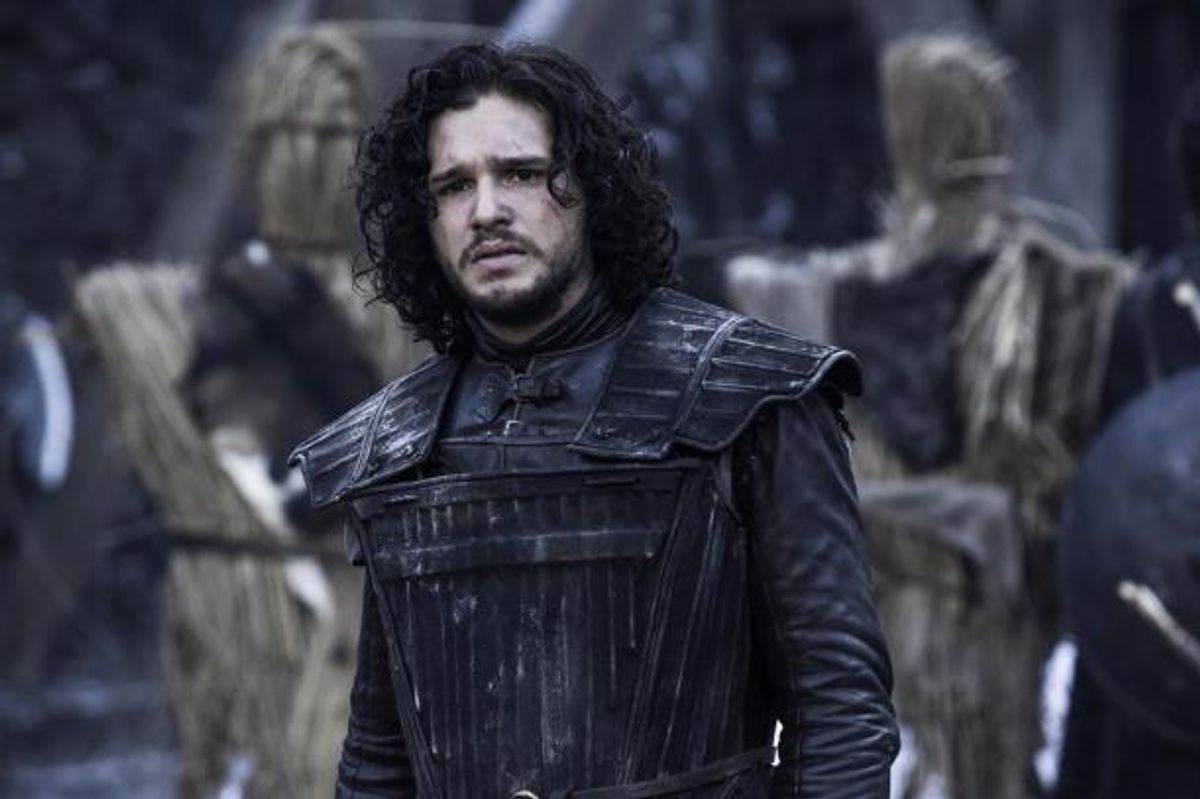 WARNING! This review contains some "Game of Thrones" spoilers!

Let’s play a game. Respond quickly to the next question; don’t overthink it: Who is the hero of “Game of Thrones”? Even in this age of overwhelmingly Byronic protagonists, an answer does not leap to mind as easily as with “The Good Wife,” “Mad Men” or even “Breaking Bad.”  Is it Jon Snow, the bastard son of the guy who seemed like the hero before he got beheaded and half-brother of the guy that got murdered during his wedding? Does valor travel more directly through blood, therefore designating one of  his half-sisters, the Stark girls? Is it the Mother of Dragons, Daenerys Targaryen whose birthright was stripped from her while she was still a child? Or is it one of the Lannisters? For better or worse, how you answer this question may say a lot about how you experience the show.

A more telling question to begin with might be: What would it even mean to be the hero of this sprawling tale? From the title alone we know ostensibly what’s at stake. Last season left us with an indisputably foul villain on that throne and an unexpected dearth of claimants in good enough shape to challenge him for it.  Unseating Joffrey Baratheon would certainly be a heroic act. But of the two individuals most likely to do so at the moment, both would be doing so out of a perceived right to rule, not justly, per se.

As Robert the Usurper’s brother, Stannis Baratheon really wants to be king. But what would that do for Westeros other than subject the realm to some seriously creepy religious fanaticism? His brother took the Iron Throne by force, his personal politics are murky at best, and he’s terrible at delegating. The equally self-righteous Dany Targaryen has, in exile, discovered a cause and a calling, freeing slaves far across the Narrow Sea. So, why doesn’t she simply remain and be a hero where slavery seems far more prevalent and the enslaved are desperately in need of a champion? The Khaleesi has no family in Westeros, no purpose other than to take back that which she, herself, never physically owned. Her claim to the throne smacks of childlike entitlement and even stubbornness.

The season premiere is practically a tour of the pitiful, sometimes laughable, but still most promising candidates for our hero. (Note: Stannis is conspicuously absent here.) Jaime Lannister is still the handsomest, eldest son of a privileged family in power, yet impotent as a warrior, having lost his sword hand. Unwilling to accept a less esteemed role, he is denounced and disowned by his father. Believing Jaime Lannister -- “The King Slayer” and “Oath Breaker” -- as the hero of this story means believing in his redemption. As he is great to look at and charismatic, and shows frequent glimmers of decency the more he transitions into underdog status, that is a fairly attractive narrative – provided you can get over the whole incest thing.

Speaking of incest, Jaime’s sister is now as low as we have seen her. Cersei refuses her brother’s, um, solace, choosing instead to drink heavily and recount her list of degradations. Her diminutive sibling, Tyrion Lannister is better off, but not by much. His true love is turning against him as he forsakes her for a new wife who needs him so much more. Trapped in a marriage that reminds him every day of his family’s legacy of cruelty, he continues to play the part of his father Tywin’s lackey in this and everything else.

In this first episode of the season, Tyrion is charged with keeping watch over a brand-new addition to the epic: the very dangerous and unpredictable Oberyn Martell, a prince of Dorne whose blood thirst is equaled only by his libido. Like just about anyone alive, the Martells have a legitimate gripe against Tywin Lannister of which Tyrion is expected to bare the brunt. His first, frightening encounter with Oberyn is prefaced by that most foreboding of Westerosi tunes, “The Rains of Castamere.” Say no more.

It also goes without saying that, on paper, Tyrion makes an ideal hero: The physically disadvantaged, least regarded child of a wealthy family, burdened with his own vices, mature enough to see his family dominance for what it is and somehow make amends. Tyrion’s journey, wherever it may take him, carries the added bonus of being both poignant and funny, featuring the melancholic shadow of his back story and the wittiest of snark between himself, his bodyguard and his squire. Typical of the hilarious henchman, Bronn seems to be the only person not afraid that Oberyn will swallow him whole.

Jon Snow is undeniably heroic. His war goes way beyond the tribal infighting that passes for Westerosi politics. He is fighting to protect the realm from untold enemies. In this episode, we meet the Thenn, a tribe of scarred and vicious cannibals who have formed an uneasy alliance with Mance Rayder and the so-called wildlings advancing on Castle Black. Despite the encroaching danger, many of Snow’s own people do not believe him, much less support him.

Unfortunately, his struggle can also be tedious to watch. I know it’s cold up by the wall – plus you alone know your ex-girlfriend’s extended family is coming to kill everyone – but the guy never lightens up. Spoiler alert: How can you not laugh when blind Maester Aemon is cracking wise and putting those nervous old Night’s Watch sourpusses in their places?

Fortunately, the season premiere builds to a satisfying climax – especially if you like violence, humor and revenge, which bring us to Arya. One can argue that Jon Snow’s battle to protect the realm is more heroic than Arya’s lust for vengeance, but her arc packs so much more edge and uncertainty. Her ally, unlike Jon’s pudgy, pathetic Sam, is the monstrous Hound, Sandor Clegane. Their unexpected pairing could either turn out like the scorpion and the frog or the Terminator and John Connor.

In the closing minutes of Sunday’s admittedly uneven episode, we see more of the latter when Clegane begrudgingly helps Arya experience a modest sum of justice. The moment is both gory and somehow touching. Little Arya may not grow up to become the hero of “Game of Thrones” – as a naive part of me has always wished – but every day she gets handier with a blade, and she certainly has the best sidekick.