Shooter Ivan Lopez, an Iraq vet, had sought help for depression before his shooting spree and suicide 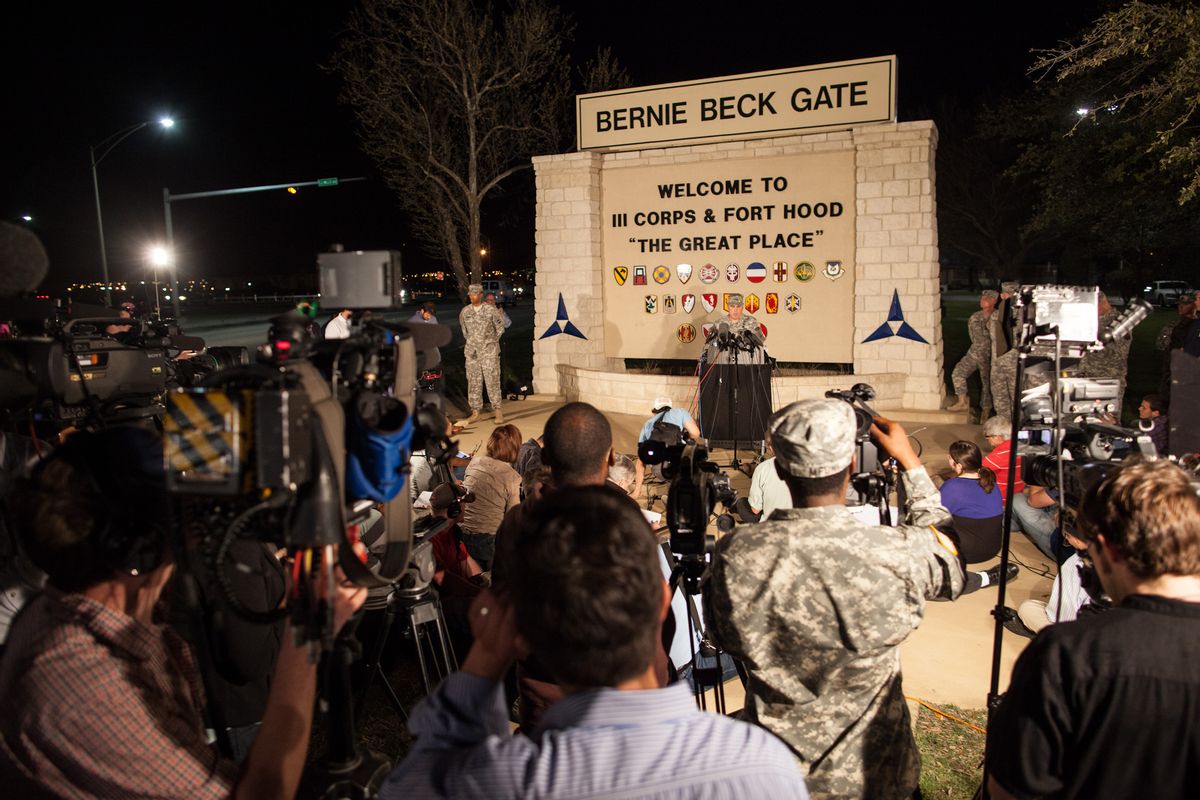 Lt. Gen. Mark Milley, commanding general of III Corps and Fort Hood, speaks with the media outside of an entrance to the Fort Hood military base following a shooting (AP)
--

Military suicides hit a record in 2012, averaging out to nearly one soldier taking his or her own life for every day of that year. With over 10 years of protracted, flailing military engagements in Afghanistan and Iraq stretched behind us in recent history, colored for troops by repeat deployments and inadequate veteran care -- particularly in the terrain of mental health -- one result of the boundless war on terror was near-certain: madness.

On Wednesday at Fort Hood, madness reigned. According to the (predictable) reports that followed the Wednesday shooting, Iraq war vet Ivan Lopez moved through three buildings on the military base, systematically opening fire with a .45-caliber semi-automatic pistol. His spree left three dead before he turned his gun to his own head and pulled the trigger. Fort Hood’s senior officer, Lt. Gen. Mark Milley, who says he is "digging deep" into Lopez's service background, revealed that the shooter had "sought help for depression, anxiety and other problems" but had never been deemed a risk to himself or others. Queue media talking heads debating what PTSD really means.

Mass shootings on military bases have become common enough that the political tableau that follows is grimly predictable. Debates and grandstanding about gun control don't quite fit the military shooting narratives -- of course there will be guns on Army bases, even if certain restrictions are in place (as they have been since the 2009 Fort Hood shooting). But the question of mental healthcare provisions (in general and particularly for vets) will rightly come to light again. As they did when Aaron Alexis opened fire at the Washington Navy Yard last year killing 12, or when Jeffrey Tyrone Savage shot dead a military police officer at Naval Station Norfolk.

One might call my use of "madness" here archaic or inappropriate. These shooters, the records have shown, suffered from mental illness. Who am I to offer the charge of madness? But in the case of Ivan Lopez this is a controversial semantic distinction I'm prepared to stand behind. Ivan Lopez was not just depressed and anxious, he was not just under evaluation for PTSD; he had been twice deployed to Iraq. He may not have seen direct combat, but he had seen war -- a disastrous sprawling war -- and in war there is madness. Experts are calling Lopez's military record "clean." How can such a statement, a claim to sanitation, ever be applied to war? Depression and anxiety, even the total range of symptoms under the PTSD umbrella, are pathologies within that problematic and aleatory list of mental disorders delineated in the DSM-5. They are subjectivities of suffering that need attention, care and treatment, that is for sure. But they are problematically applied to individuals as essential categories -- the world in which these sicknesses reside is rarely itself questioned or so pathologized.

Alexis, the Navy Yard shooter, had suffered with paranoid schizophrenia, we later learned. The chilling shooting could, like Alexis himself, be pathologized. But, in the wake of yet another military shooting spree and another soldier suicide, it is not enough to simply understand these shootings through the prism of mental illness combined with access to guns. Context is all, and a context of repeated deployments and protracted wars is the sickness that needs assessment and treatment. As more and more troops return from Afghanistan -- as Lopez had left Iraq -- U.S. soil will welcome home troops from a mad world; it would be insanity indeed to assume that madness will be left behind in conflict-beleaguered Iraq and Afghanistan. When troops come home, the madness of war comes with them.