Though no floating debris has been found, search teams are starting the underwater search with just days to go 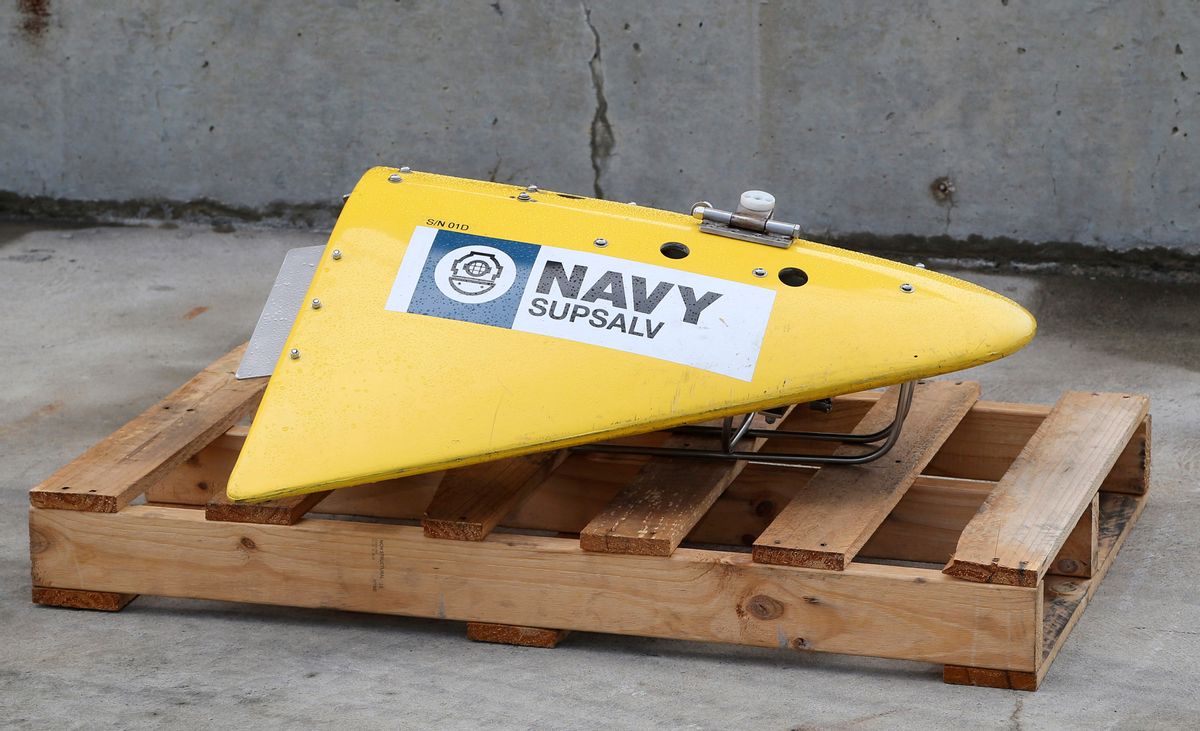 CORRECTS IDENTIFICATION OF EQUIPMENT TO A TOWED PINGER LOCATOR - A Towed Pinger Locator (TPL), used to detect black box recorders, sits on the wharf at naval base HMAS Stirling in Perth, Australia, ready to be fitted to the Australian warship Ocean Shield to aid in the search for missing Malaysia Airlines Flight MH370, Sunday, March 30, 2014. The Australian Maritime Safety Authority, which oversees the search, said the ship will be equipped with the TPL, an unmanned underwater vehicle, and other acoustic detection equipment. (AP Photo/Rob Griffith) (Rob Griffith)
--

The underwater search for MH370 has begun. It has been nearly a month since Malaysia Airlines Flight MH370 went missing. The plane and 239 people on board took off on March 8, in Kuala Lumpur, and never made it to Beijing. It is still unknown what happened on board the flight -- why the transponders went dark, and why the plane veered radically off course.

Folks at the British satellite company Inmarsat (using sophisticated, never before used calculations) determined that the flight must have crashed into the Indian Ocean. Search teams from eight countries -- the U.S., China, Australia, New Zealand, Great Britain, South Korea, Japan and Malaysia -- have been combing 98,000 square miles of ocean 1,100 miles northwest of Perth, Australia. So far, despite a large number of satellite images that suggest debris in the water, and actual sightings, no floating debris from MH370 has been found.

Despite not having found any physical debris, which according to CBS News is key to calculating where the plane entered the water based on currents, the underwater search has begun. According to Australia's Joint Agency Coordination Center:

"The Royal Australian Navy, using the Towed Pinger Locator from the United States Navy on Australian Defence (sic) Vessel Ocean Shield, and the Royal Navy, with a similar capability on HMS Echo, today began the underwater search for emissions from the black-box pinger from Malaysia Airlines flight MH370."

According to CBS News an airplane's black box is designed to withstand fire, being submerged in water, hydrostatic pressure, heat and being crushed. Unfortunately, the beacons, which are activated once the black box makes contact with water, only have a battery life of around 30 days. The black box has two recorders on it, each with a beacon; one records voices from the cockpit, the other records data. Finding the black box is investigators' best hope at determining what happened to MH370 and why it veered off course and into the Indian Ocean.

Australia has taken up the lead in the search. Retired Air Chief Marshal Angus Houston is at the helm of the joint search team. He said that they are basing the underwater search on the best new data available. "The area of highest probability as to where the aircraft might have entered the water is the area where the underwater search will commence," Houston said, according to CBS News.

The U.S. Navy black box detector can detect "pings" from the black box at up to 20,000 feet below the surface. The search area is only 19,000 feet deep, but the sheer size of the search area and the conditions of the water make detection difficult.

However, search teams haven't given up hope of finding floating debris. On Friday there were 14 planes and 11 ships involved in the search. According to the Wall Street Journal, Houston said, "There is a great possibility of finding something on the surface—there's lots of things in aircraft that float." The tricky part is sorting through a rash of debris that is unrelated to the missing flight. According to the Joint Agency Coordination Center, "Today there have been some sightings of objects reported by ships in the search area but none were associated with MH370 (as at 1900 AEDT)."

Australian Prime Minister Tony Abbott is also trying to stay positive, though admits there is no guarantee of a major breakthrough. "On the basis of just small pieces of information, we are putting the jigsaw together," Abbott explained on Thursday. "Every day we have a higher degree of confidence that we know more about what happened to this ill-fated flight."