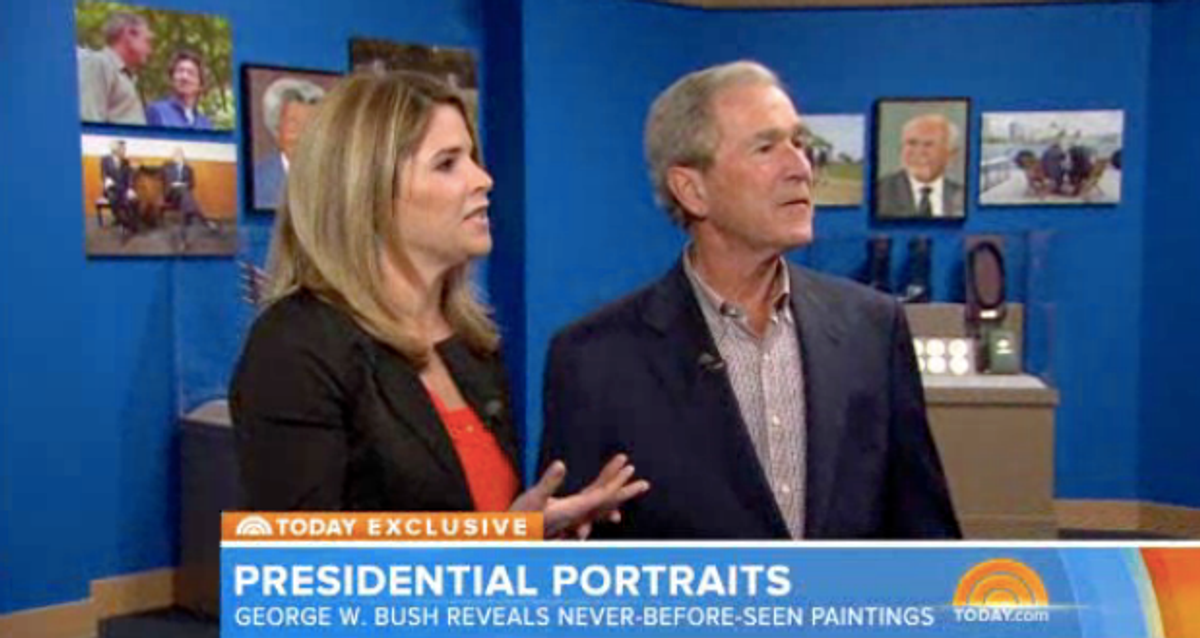 A year after hacker Guccifer leaked photos of George W. Bush's shower nudes, the former president has realized that the world longs for more of his artwork. The "Today" show outscooped Guccifer on Friday thanks to Bush's daughter, Jenna Bush Hager, a special correspondent for the show. Hager traveled to Dallas' George W. Bush Presidential Library and Museum to offer an unprecedented (pun very much intended) look at Bush's recent collection.

The exhibit, "The Art of Leadership: A President's Personal Diplomacy," showcases Bush's most sophisticated work, yet: the budding artist has moved from nudes to landscapes to dog and cat portraits to portraits of world leaders that include the likes of the Dalai Lama.

However, there is at least one painting inspired by a dog story. Better yet, it has to do with Vladimir Putin. From "Today":

“As you know, our dear dog Barney, who had a special place in my heart — Putin dissed him and said, ‘You call it a dog?’’’ Bush told Hager.

He continued: “A year later, your mom and I go to visit and Vladimir says, ‘Would you like to meet my dog?’ Out bounds this huge hound, obviously much bigger than a Scottish terrier, and Putin looks at me and says, ‘Bigger, stronger and faster than Barney.’

“I just took it in. I didn’t react. I just said, ‘Wow. Anybody who thinks ‘my dog is bigger than your dog’ is an interesting character.’ And that painting kind of reflects that.”

This is the painting: Bush has also painted former British Prime Minister Tony Blair."I don't think he has [seen it],'' he said to Hager, before making an intensely satisfying pun. "No telling how these people are going to react when they see their portrait. I think I told Tony I was painting him, but he kind of brushed it off, so to speak."

"No art pun intended?" asked Hager, as Bush chuckled to himself.

"That was an art pun," he said, shaking his head.

"I hope he likes it," said Bush, continuing his train of thought. "I like it because it conveys a compassionate person and a strong person and a reliable friend." Here is the painting of Blair: Watch the segments below: