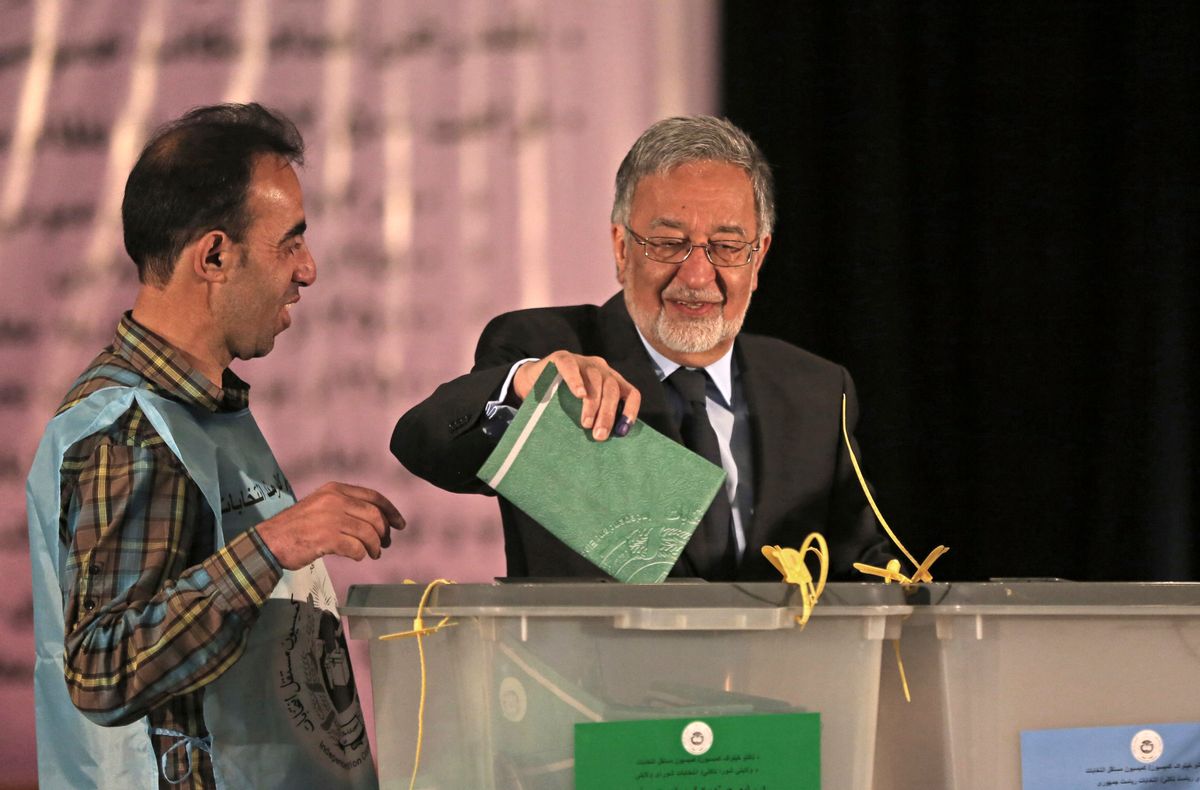 Afghan president candidate Zalmai Rassoul, right, casts his vote at Amani high school, near presidential palace in Kabul, Afghanistan, Saturday, April 5, 2014. Afghan voters lined up for blocks at polling stations nationwide on Saturday, defying a threat of violence by the Taliban to cast ballots in what promises to be the nation's first democratic transfer of power. (AP Photo/Massoud Hossaini) (Massoud Hossaini)
--

Eight candidates are vying to succeed President Hamid Karzai in Afghanistan's election on Saturday. A look at the field:

ABDULLAH ABDULLAH: Having gained 31 percent of the vote as runner-up to Karzai in the disputed 2009 elections, Abdullah has an advantage in name recognition and political organization. He was a close aide to the late Ahmad Shah Masood, the Northern Alliance rebel commander famed for his resistance to Soviet occupation and the Taliban. Abdullah has a strong following among ethnic Tajiks in Afghanistan's north, but his perceived weak support among Pashtuns — Afghanistan's largest ethnic group at 42 percent — could keep him from gaining a majority of votes, even though he is half-Pashtun.

ZALMAI RASSOUL: A former foreign minister, Rassoul has been national security adviser to the government and is seen as close to Karzai. He could end up being a consensus candidate among many political factions. A Pashtun like Karzai, he has a medical degree and is fluent in five languages, including French, English and Italian. He lived in Italy for many years with Afghanistan's deposed King Zahir Shah, who died in Kabul in 2007.

ASHRAF GHANI AHMADZAI: Ghani is a former finance minister who ran in the 2009 presidential elections but received just 3 percent of the vote. A well-known academic with a reputation as a somewhat temperamental technocrat, Ghani chairs a commission in charge of transitioning responsibility for security from the U.S.-led coalition to Afghan forces. Ghani also worked at the World Bank.

ABDUL RASOUL SAYYAF: An influential former lawmaker and religious scholar, Sayyaf is one of the more controversial candidates among Afghanistan's foreign allies because of his past as a warlord during the 1990s civil war and allegations of past links to radical jihadists including Osama bin Laden. As a Pashtun and charismatic speaker, he may appeal to Afghanistan's large number of religious conservatives.

QUTBUDDIN HILAL: An engineer by training with experience in Afghanistan's Defense Ministry, Hilal once headed a military commission tasked with uniting jihadi organizations. He twice served as first vice president — in 1993 and 1996 — and also served as deputy prime minister. He has been endorsed by the leader of Hezb-i-Islami chief, Gulbuddin Hekmatyar, considered a terrorist by the United States and a target of the U.S.-led coalition.

GUL AGHA SHERZAI: Earned the nickname of "the bulldozer" for serving as public works and transport minister. Previously a mujahedeen commander in Kandahar, he also has served as governor of Kandahar and later governor of Nangarhar. He was the only governor to meet Barak Obama during his 2008 presidential campaign.

HEDAYAT AMIN ARSALA: Born in Kabul to an influential Afghan family, Amin was the first Afghan to join the World Bank, in 1969. He worked there for 18 years before joining the fight against the Soviet occupation. Arsala later served as finance minister, briefly as foreign minister, and after the collapse of the Taliban was selected as commerce minister. He also headed the Independent Commission of Administrative Reforms, the National Statistics Commission and the Economic Cooperation Committee. For years, he served as a senior adviser to Karzai.

MOHAMMAD DAOUD SULTANZAI: A pilot by training, Sultanzai defected to Germany after the Soviet invasion of Afghanistan and then settled in the U.S. He returned to Afghanistan after the fall of the Taliban and went on to serve as a member of Parliament. Sultanzai also is known as an Afghan political commentator and talk show host.