Behind the scenes of Charles Keating's sexist financial empire

The disgraced savings & loans baron died this week at 90. Here's a look behind the curtain of his crooked operation 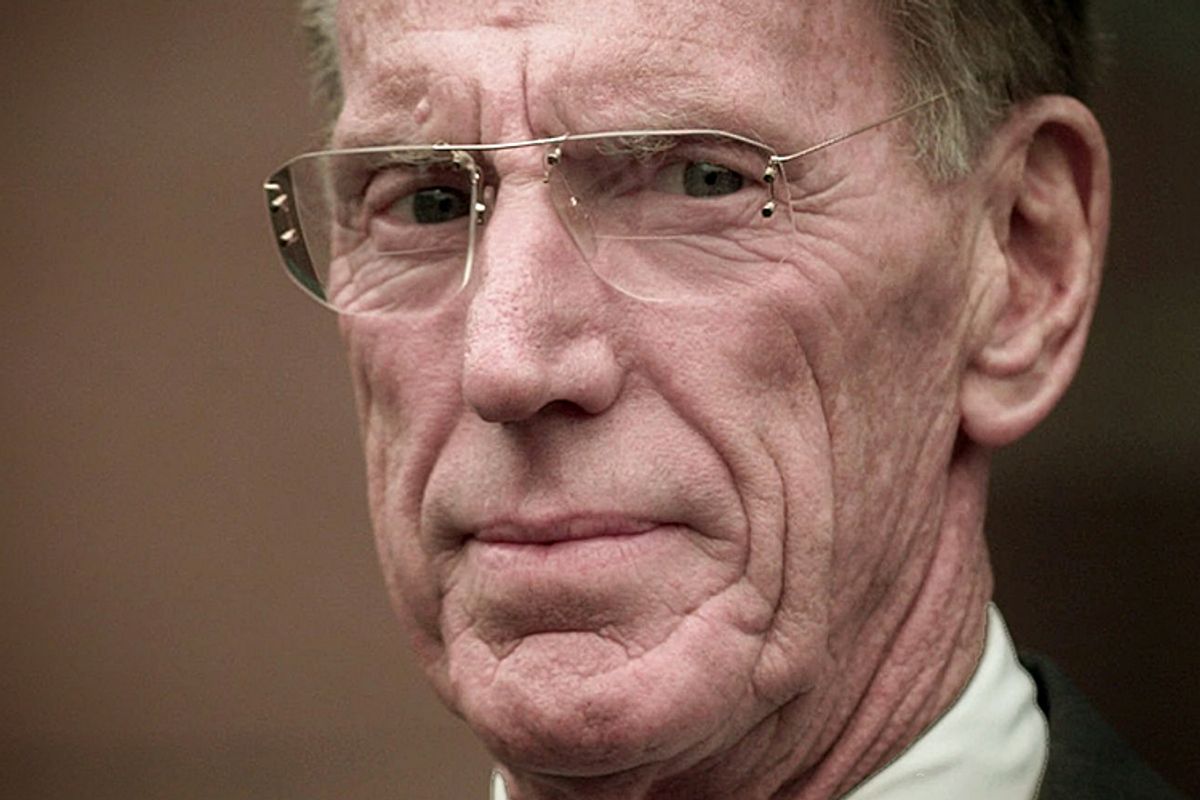 The infamous savings & loan founder Charles H. Keating Jr. died Wednesday at age 90, a relic from a bygone era. He was by turns the celebrated emblem of American progress, the pious don of a moneyed realm and the symbol of the follies of financial deregulation. His rise and fall took place against the backdrop of America’s S&L crisis, a time in which oil prices, inflation and the fancy-sounding Garn-St. Germain Depository Institutions Act of 1982 turned the once-staid savings vault into a tomb of broken mom-and-pop dreams.

When I was a cub reporter starting out in the 1990s, I was assigned to survey the wreckage of his empire; in the course of reporting, I found a perverse side to Keating that never quite made it into the headlines. Here was a religious man, nicknamed Mr. Clean, whose empire-building was assisted by capable women such as CEO Judy Wischer and scores of gorgeous paralegals. At the time, a female chieftain setting boardroom agendas was rare (heck, it still is) and I had been dispatched to Phoenix to report about this novelty for a now-defunct women’s magazine. I learned that these businesswomen were not necessarily the strong, smart, independent types I had thought I might find. Rather, they were polished cogs in a crooked operation and presented themselves as unwitting Ralph Lauren-styled accessories in a Ponzi scheme. As one legal secretary later admitted: "We were known around town as the Stepford Wives because we were so subservient.”

In the 1980s, Charles Keating sat atop a crowded pantheon of Big West businessmen. Michael Milken operated out of Beverly Hills; Ross Perot from Texas; and brothers Essam and Adnan Khashoggi hovered in the airspace above LAX. But Keating, at 6 feet, 5 inches, loomed above them all. He had a lantern jaw, aviator-style glasses and canyon-size cracks that lined his weathered face. He’d taken a small-time institution in Orange County -- Lincoln Savings & Loan of Irvine, Calif. -- and, using newly unfastened federal rules, parlayed the S&L into a juggernaut. He poured depositors’ money into speculative real estate, junk bonds, hastily built housing tracts and high-yield bling. In just three years, Lincoln’s assets roared from $1 billion to nearly $4 billion and then onto $6 billion or more, depending on who was counting. Keating went on to use his federal-insured institution like a personal ATM, taking his huge family on European jaunts, buying rare carpets from the Holy Land, and collecting politicians like they were pedigree cats.

Yet, he spent decades cultivating a different side of his public persona. He was the man who’d headed up a drive to purge sexually explicit material from Cincinnati’s newsstands. In the 1950s, he had formed Citizens for Decent Literature, partly to shut down Larry Flynt’s Hustler magazine and club. That group grew to 300 chapters around the country and lifted the profile of the morally righteous Keating to the point where President Richard Nixon appointed him to head an anti-pornography commission. If there was such a thing as a decent businessman, he was Charlie Keating.

When I arrived on the scene many years later, Keating had already been tried on securities fraud, his trial attended by some of the 23,000 customers whom he had gulled. While he was serving a 10-year sentence, I arrived in Scottsdale, Ariz., site of the S&L’s parent company American Continental Corp. I was set to interview seven women who had worked for him; our rendezvous site was the Phoenician, one of the most expensive hotels built at the time. I saw it glistening like a mirage that late afternoon, sprawled on 130 acres in the Sonora Desert, its face set against Camelback Mountain, flanked by impossibly green lawns and tall palm trees. The resort was actually a monument to Keating and, like him, it was over the top with an irrigated golf course, a pool lined in mother-of-pearl tile, and a multimillion-dollar art collection.

That day, the thermostat had reached nearly 100 degrees. I was tired and scraggly but eager to meet these women who had once worked for “Charlie,” as they called him. When I walked into the lobby, I spotted them immediately. They were stunning women in their 20s, impeccably dressed in skirt-and-jacket ensembles of teal, orange and taupe. They wore chunks of silver at their throats and wrists and whenever they moved their jewelry clinked softly like a faint choir. They were overwhelmingly blond, with white teeth, waxed eyebrows and shapely figures. These women had been trained to dress not just with care but for effect. As we talked among ourselves, I was taken by their names: Kathy “Kat” Ballew, "Deb" Karbo and Annie Oakley. But after spending time with these women, their stagelike names became the least memorable thing about them.

They proudly admitted they had been hired for their good looks. Keating had spied one young woman from his limousine as she was crossing the parking lot. “She was very pretty and perfect like a model,” said a top secretary, Jackie Weaver. Never mind that the boss didn’t know anything about her intellect, her administrative skills or even whether she could type. He just pointed to her and said I want her, Weaver recalled. “So she went from nothing to the assistant of one of the top CEOs in the country, just like that.”

First, the young woman (who had asked to remain anonymous) had to go through a gauntlet of tests and interviews. “A lot of the male attorneys wanted to meet you to decide whether you should be hired. “It was almost ridiculous, it took so long,” said the lone brunette. But once you were in the power environment, you were golden. To keep their jobs, these women kept their heads down and always smiled. “You worked hard and were expected to act professionally at all times,” said one secretary. Even if you had a problem at home, you had to be sunny, happy, gorgeous and obedient. “You had to say yes with a smile.”

The rewards were worth it. One woman earned $65,000 as an executive assistant in 1988, the year she also received a $50,000 bonus. (That’s the equivalent of $253,000 today.) She used her bonus as a down payment on her custom-built house and when she got married, Keating paid for her lavish Canadian honeymoon. The woman who was spotted in the parking lot earned $100,000 the year she turned 24. “Basically, the shorter the skirt, the bigger the bonus,” Suzan Klumker told me. One year, 10 secretaries received clothing allowances of $5,000 and blew it all by shopping at Gucci’s and I. Magnin's across the street. On casual Fridays, members of the blond squad wore miniskirts or shorts with crop-tops, lace anklets and high heels. “It was so weird to see these (scantily clad) women walking around,” said the former public relations manager, Trisha Johnson.

Once, Keating hired a mousey secretary. He welcomed her and explained the duties. Then, he took one of his “angels” aside and told her to take the dowdy miss out for some new clothes. “We picked out gorgeous stuff, things I would have loved to have myself. It was like we had our own Barbie doll to dress as we wanted,” said Weaver. The “girls” spent $7,000 that afternoon.

“If you started to gain weight, you were told to go on a diet,” said another woman. At one point, Keating invited a plastic surgeon inside his firm to make a presentation.  Later, the surgeon performed liposuctions, breast augmentations and other procedures on the women -- all for a discount arranged. “It became an office joke,” said a blond.

If any of the women seemed bothered by the sexual undertow in the hyper-efficient office, they didn’t say a word. After all, Keating was such a devout Catholic that he donated more than $6 million to the saintly Mother Teresa, flying her around the country in his personal jet. He had hired respected economist Alan Greenspan, later chairman of the Federal Reserve, to say that Lincoln S&L’s managers were “expert” and their investments not harmful to the public at all. Keating was so well-thought of that he essentially bribed five U.S. senators -- including a decorated war hero and a former astronaut -- to pressure regulators to kill their investigation.

But while women were flooding into offices he also trained a generation of young female professionals to outfox regulators. In that respect his protégé Judy Wischer was his crowning achievement, and Keating’s right hand woman. She too had been blond and 22 when she joined him in 1972, and proved to be so proficient with numbers that Keating took her under his wing. “She knew accounting,” one woman said admiringly, “and everything else Judy needed to know, Charlie could teach her.” Every big con needs its runners but Wischer was the only one who could stand up to Keating and some of his plans, the secretaries all agreed. Wischer was the model for Charlie’s Angels and she showed them what to do and how to act. “In order to bring someone, especially a woman, out of the minor leagues when they have just been promoted, we let them fire somebody," she once said. “Suddenly, they know they're not playing by the same rules anymore.”

Rules bend the higher you rise, and the desert air plays tricks with the mind. Wischer hadn’t always backdated documents, borrowed unsecured loans, and moved assets from one subsidiary to another ... but at some point, she became part of the scheme. I saw her in Scottsdale that summer, right before she was expected to go to trial, and she looked drawn and tired. She had spent years denying any wrongdoing, only to lose her marriage, full custody of her two daughters, and her once high standing in the business world. After being reduced to the means of fleeced S&L depositors, she eventually folded and testified against her boss. In the end, she pleaded guilty to bank and securities fraud and didn’t act like a Stepford Wife.

As for the unwitting accomplices in Keating's swindle, many of the women I met that summer went on to successful, honest, albeit lower-profile jobs. But there were unsettling things about that visit. At a time when working women were expected to dress and look sedate and professional, Keating and his “girls” flaunted that code and dressed like hustlers. At a time when S&L’s deposits were supposed to be “safe” and guaranteed, they were being tapped for breast jobs and shopping sprees. But at least there were consequences. Close to 1,000 high-flying executives from the 1980s and 19990s received public trials and jail time. Keating himself was convicted on 73 counts of bankruptcy and wire fraud and sentenced to 12 years in prison, serving 4 ½ years of that sentence. He and other convicted executives were forced to disgorge their ill-gotten gains and their companies were punished by injunctions, fines and tighter examinations.

That’s a far cry from today, after the Crash, when chieftains and gonzopreneurs at financial institutions get raises after paying $17 billion in fines -- or five times the amount that the villainous Keating lost in his era. S&Ls today are like mega-herbivores that once walked the earth feasting on leaves and grass. These dinosaurs may be practically extinct, but so is the practice of holding executives accountable.