Pixar chief: "All of our films start out as disasters" 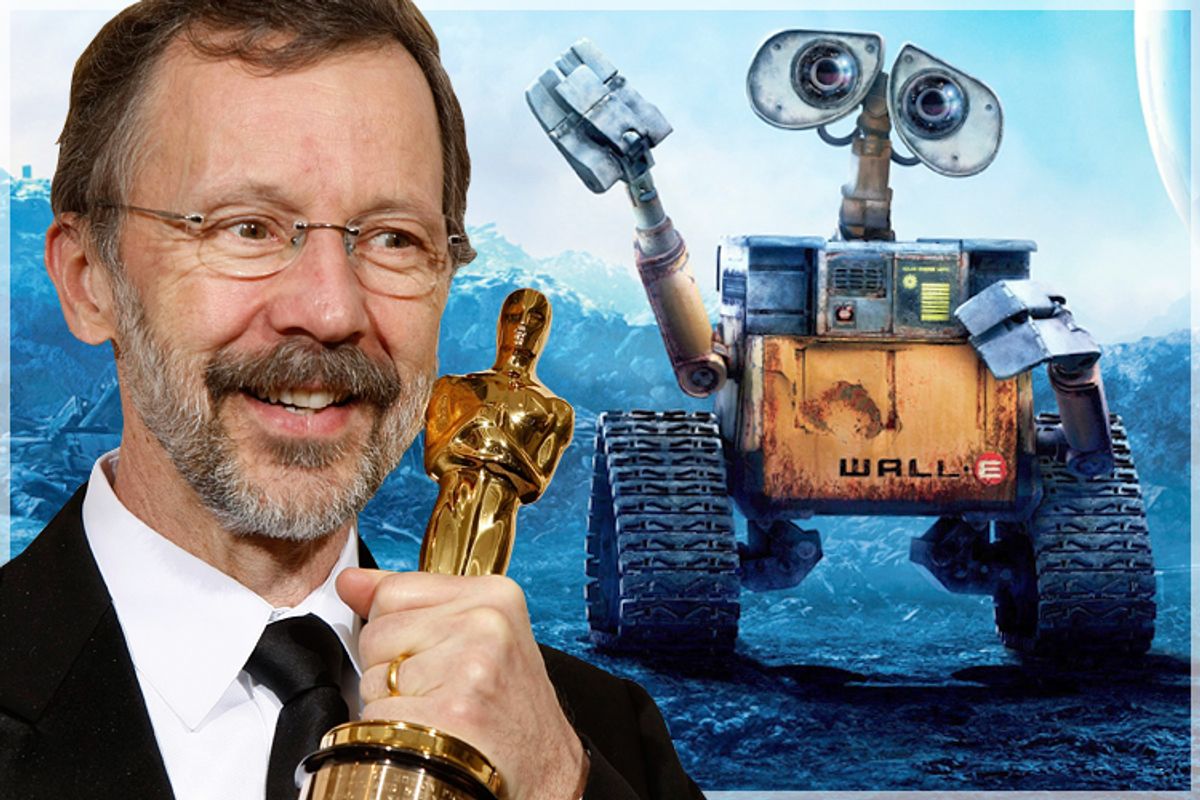 Pixar released “Toy Story” nearly 24 years ago -- the first full-length film created entirely with computer animation. For Ed Catmull, president of Pixar and Disney Animation, it's an accomplishment 20 years in the making.

Catmull, who has a Ph.D. in computer science and five Academy Awards, and previously worked at companies like Boeing and LucasFilms, dreamed of being a Disney animator ever since he was a kid watching “The Wonderful World of Disney” on television. The successful completion of "Toy Story" stirred mixed emotions. The movie soared at the box office, and forever changed the face of animated film. But Catmull was left with a sense of “What’s next?”

Catmull’s new book, "Creativity, Inc.," is a candid look at Pixar: its practices, successes and surprising near-failures -- not to mention its iconic co-founder, Steve Jobs. In an interview earlier this week, Catmull spoke with Salon about Silicon Valley, the secret to innovation, the evolution of Pixar and more. This interview has been edited for length and clarity.

Next year will be 20 years.

Watching it, it still seems new and relevant and visually compelling. That’s to an untrained eye, though. As somebody who is a computer animator, it must look different so many years later.

Well, the way we viewed it then -- which I think was the correct way -- is whatever the innovation process is, it is actually secondary. I will say that not everybody got that. And what happens then is, you’ll look at a lot of movies you’ll say, "The movie looks fantastic, but the story isn’t very good." So it’s clear one can focus on making it look good, and actually lose sight of the real goal, which is to make a movie that affects people.

I believe one of the things, which we started off with, was we never got confused about that. If we didn’t make a good movie none of this mattered. And I think that’s a thing we keep coming back to. By the end of the book, we say, "keep making this stuff better and cheaper and faster and do all that." It’s not the real goal, though. The real goal, in our case, is to make movies that are going to touch the culture in a positive way.

You discuss in the book how important candor is — that people working on these creative projects should not be afraid to speak their minds. Why do you think that's so important?

One of the points I always want to make is that all of our films start out as disasters. And it took us a while to really understand that this is the way it’s going to be. So the issues of, "Are people candid or are they holding back what they think?" -- that still exists. It would be misleading for people to think, "Well, somehow Pixar has figured out how to be candid." When actually what we’ve figured out is that we always have a problem with people saying what they think — it’s human nature — and, therefore, we always have to work at it.

I was curious if you have a favorite animated movie or, more specifically, a favorite Pixar movie — either from the standpoint of actually viewing it or the process of it coming together.

OK, so I’ll give you some examples, although I can’t put it in terms of favorites. The real issue which I think you are articulating is that the making of the film gives me a point of view or an experience which is different than the film itself. So I can’t look at "WALL-E" or "Finding Nemo" or "Up" and look at in the same way as people outside of the company would look at it. Each one of them had angst.

When I see a film, I’ll remember that there was a time when it wasn’t working and there was some pain and angst in order to get it to work. Then there are these events that happen — they usually happen once per film, sometimes twice per film. Every once in a while, magic happens and it’s the hardest thing to describe, and that is when [our brain trust] is all of a sudden focused on the problem itself and you just feel it.

I remember one time it happened on "Frozen" when we had added a director. We had one of these meetings, which we don’t record because they're meant to be spontaneous. There’s something about recording which alters the dynamic. But I was in this meeting when we hit one of these magical points when all of a sudden problems were being solved. And there was an intensity. If you looked around the room  and the way everyone was thinking and the way they were engaged -- it was stunning.

I was taken by it and that I went back the next say and said, "That was so magical, I wish we had recorded" — but we didn’t, but we do take notes. And I said, well, I’d like to look at the notes. And when I read the notes, it didn’t capture anything that took place in the room. And I was so disappointed.  And I asked the directors and they said, "All we do is use those notes to remind us one or two days later, because it never catches what’s in the room."

Every once in a while that magical thing happens, it’s ephemeral, and for those who are in there, they love it, they talk about it, but we have no record of it; no way of capturing it.

Do you feel it or see it when you watch the film?

I would say, yes. But there’s an interesting problem that goes with that and that is when you are involved in the movie a fair amount you also lose objectivity. So when you experience a magical moment with a group and then you watch the movie, they’re intertwined in your head.

So you have to show the film -- the incomplete product, if you will -- to a group with fresh eyes. At least once per film, we’ll go out and show it to a recruited audience. And when you do that, it’s a pretty interesting phenomenon. If you sit in the room with these people and hear them laugh or watch them looking at the screen; not interacting with the people, just sitting in the room observing them. It forces the filmmakers to look at the movie from the point of view of the person sitting next to them. We do take notes and talk to people afterward, but 90 percent of it comes from sitting with somebody who’s never seen it before. It alters your perception.

I can only imagine. Are there moments when people laugh or gasp that you don’t expect?

Yes. Well, first of all, if you do something funny, and you did it two years ago, by the time you get to the screening everybody at work has seen it. So you don’t remember whether or not it’s funny. So then you show it to a fresh audience and they laugh, there’s that reinforcement; or they might miss it, or music stepped on the line, or it doesn’t work.

But it isn’t the funny that matters as much as the emotion, and to what extent does it rivet people. So this is what you look at: When people go to the bathroom, how fast do they go and how soon do they come back? [As the filmmaker], you’re trying to pay attention to the people. Are they glued to the screen?

If they’re with you, then it’s working.

Some of these movies are so emotionally wrenching. I remember seeing "Up" and sobbing. Does it surprise you at all to see how truly affecting some things might be?

At heart we believe that the films that work well are the films that do touch people emotionally. That’s what we strive for. Well, it turns out comedy is easier to put up -- and of course we do want the films to be fun and enjoyable -- so we do put comedy in, but what makes it hard is searching for something that people relate to, that means something to them. When I gave the example of [the near-failure of] "Toy Story 2" -- it just didn’t work emotionally. The reason we restarted it was to put in the things that [viewers can relate to]. We as people aren’t toys, so you have to do something that has an emotional connection for us.

["Up's" writer] Pete Docter is a person who, right at his core, is searching for an emotional connection -- but he’s not trying to go from the cheap thing. You know from a lot of movies, there are a lot of things that make people cry. There’s a death in there, or a way to queue the music; you can assemble it from the old tropes. What we want grabs people in a different way.

So when [Docter] made "Up," where he started was in wildly different place, but his compass was trying to get something emotional. You end up with a movie about an old man who’s off on this adventure with this boy ...

Well, it's not something that would have passed an elevator test. Right? You’d be hard pressed to convince people this is a good idea. We pride ourself in the fact that at least some of our movies wouldn't pass the elevator test. "Ratatouille" is another example of that. "WALL-E" is a love story between a trash compactor and robot; that’s not an obvious concept.

It was interesting, from reading your book, to see how Steve Jobs worked with Pixar, and took a step back to let you guys create, which is maybe not what people sometimes think would be his approach. Can you talk about the Steve Jobs you presented in the final chapter of the book?

Here’s the critical issue: Steve went through an arch over his life. While he was always brilliant and passionate throughout that whole life, his way of dealing with people, and the way he thought about things changed as he learned and as he matured. And I would say 15 to 20 years ago, it began to consolidate and Steve began to change quite dramatically. The people that saw that all stayed with Steve through the rest of his life.

So, the result is that [negative] stories told about Steve are from the earlier Steve, and they're the more extreme things, because they make better stories. The impression the [media perpetuates] is older, and incorrect. It doesn’t recognize what really took place and what made him so special. None of that was captured.