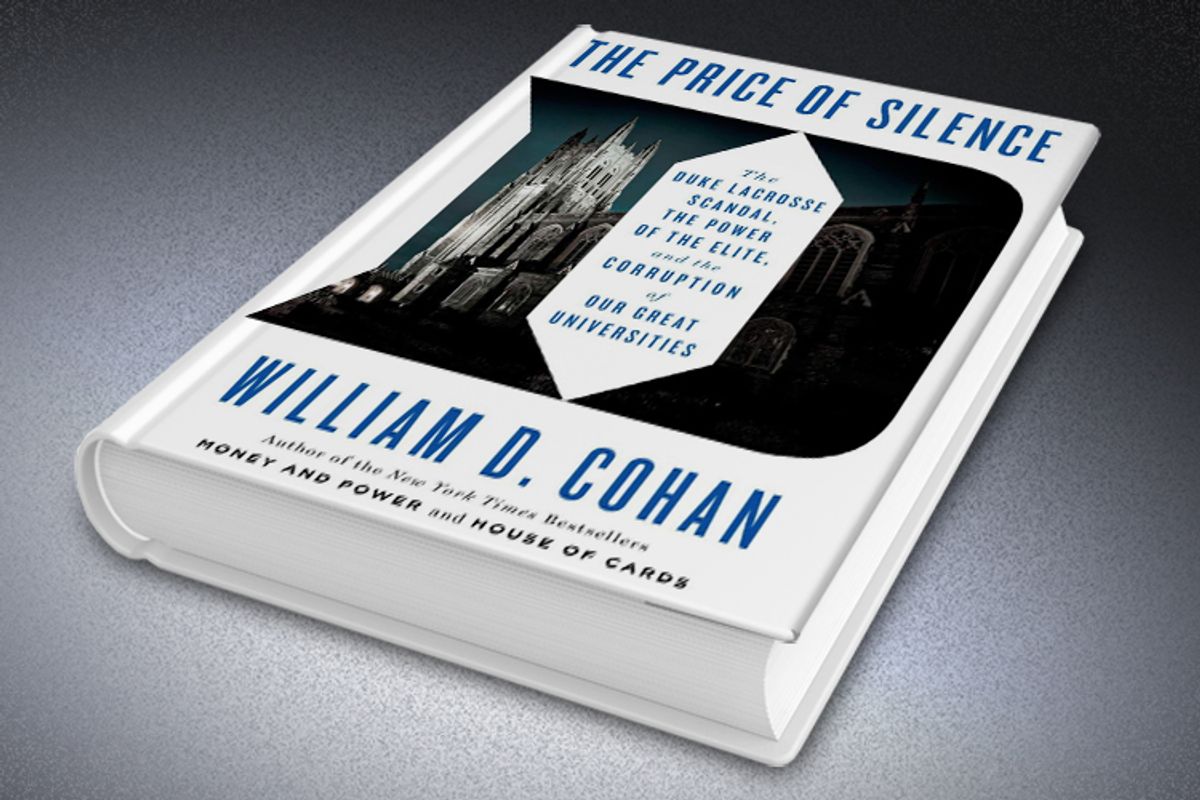 "When I think back through the whole complex history of this episode," said Richard Brodhead, the president of Duke University to a gathering organized by that university's law school in 2007, "the scariest thing to me is that actual human lives were at the mercy of so much instant moral certainty, before the facts had been established. If there's one lesson the world should take from the Duke lacrosse case, it's the danger of prejudgment and our need to defend against it at every turn." What do you think, everyone? Have we learned that lesson?

There's probably some tiny percentage of the American population for whom the words "Duke lacrosse" summon up nothing but images of grassy fields, preppy players, cheering crowds, championship seasons and all the other tedious paraphernalia of athletic sentimentalism. For the rest of us, the words remains synonymous with one of the biggest media circuses of the 2000s. In March 2006, two strippers were hired by members of the university's lacrosse team to perform at the private home of two team captains. By the end of the evening, one of the two African-American women had filed a complaint about the racial insults shouted at them by the predominantly white partygoers as they left and the other would claim that she had been forcibly detained, raped, sodomized and strangled by a group of men in the house's bathroom.

William D. Cohan's "The Price of Silence: The Power of the Elite and the Corruption of Our Great Universities" is the definitive account of what happened up to and after Crystal Gail Mangum made her accusation. Its 600-page length might at first seem more appropriate to a presidential biography or a history of one of the world wars, but "The Price of Silence" earns its heft, and unlike most biographies and histories, it rarely loosens its grip on its reader's attention. Granted, Cohan's detailed opening section -- recounting the scramble by the newly instated Brodhead to retain Duke's celebrated basketball coach, Mike Krzyzewski, in the face of a job offer from the Los Angeles Lakers in 2004 -- initially feels extraneous. But soon the reasons for Cohan's commitment to exhaustively presenting the context of the Duke lacrosse case become evident: This scandal, even more so than most scandals, was one that triggered everybody's prejudgments. Mangum's accusation was a virus that landed in the most hospitable petri dish imaginable, a culture rife with unresolved racial, sexual and class tensions and grievances.

Cohan's "Coach K" preamble is meant to underline something that Brodhead learned during his first days in office: That at Duke, the tail of athletics wagged the dog of the university itself. According to Cohan, Krzyzewski was in effect the most powerful person in the institution, and it was beholden on Brodhead, his technical boss, to do anything to keep him, including building his team a new practice facility and providing a supremely compliant athletic director. Krzyzewski doesn't figure much in the lacrosse scandal, but to understand why so many people at Duke and in the surrounding community of Durham, N.C., were so eager to believe the worst of the lacrosse players, it's essential to grasp that within the small universe of Duke, athletes were pashas. Not only did they get away with repeated incidents of drunk and disorderly behavior, but they so dominated the university's social life that, as one Durham journalist memorably put it, parents were shelling out "close to a quarter of million dollars, no bargain, for a jock-dominated sex zoo where Junior can play Hugh Hefner to a hutchful of willing bunnies with high SATs."

As the book's subtitle would have it, this is a story of how lucrative and well-connected sports programs "corrupt" universities like Duke. Perhaps ultimately Durham's festering atmosphere of resented, abusive privilege is to blame. But the impression left by "The Price of Silence" is that the true drivers of the scandal were an overzealous Durham police officer, Mark Gottlieb, and, above all, the misconduct of Durham's district attorney, Mike Nifong. What Cohan characterizes as Gottlieb's "crusade against the Duke students in [Durham neighborhood] Trinity Park" -- overzealous, perhaps, but the long-suffering residents of Trinity Park, with their urine-poisoned lawns and sleepless weekend nights, were not complaining -- was in full swing by March 2006. For his part, as a white man, Nifong faced a tricky primary reelection campaign against two Democratic rivals, a black man and a white woman.

If not for the individual circumstances and predispositions of these two men, it seems likely that Mangum's accusation would have been written off as too muddled and precarious to merit pursuing. Under the influence of a substance of some kind -- the players insisted that Mangum arrived at the party impaired and she would eventually suggest that she was given a drugged cocktail after she arrived -- she had passed out and had to be carried to the other dancer's car when they left. The dancer, Kim Roberts, called the police because she did not know where Mangum lived. Cohan proposes that Mangum reported being raped in order to distract authorities from the fact that she'd been found intoxicated and had left her two young children home alone. Mangum's initial statements varied wildly, with the number of men who assaulted her ranging from two to 20 and the number of fellow dancers ranging from one to three. Mangum, it would emerge, had a history of mental disturbance and run-ins with the law. She once stole a taxi cab and fled sheriff's department pursuit by driving 70 miles per hour at night without headlights on a 55 mph highway, much of it on the wrong side of the road, then laughing as she tried to run over a sheriff's deputy.

Mentally ill people can, of course, be raped, but they do not make good witnesses and for that reason many prosecutors are hesitant to seek indictments against their alleged attackers. Throughout the media frenzy that followed the announcement that Nifong would pursue the case, Mangum's version of events changed continually and considerably. She was at first unable to select the attackers from a collection of photos of lacrosse team members, then later claimed to be nearly certain about photos she'd bypassed before, photos of men who differed significantly from her initial descriptions of the perpetrators. The other dancer, upon first learning of the rape accusation, described it as "a crock," and said that she'd been with Mangum for all but five minutes of their time in the house. She later recanted this statement; the players' attorneys pointed out that this was after the D.A.'s office let her off from a parole violation with a slap on the wrist.

Nevertheless, Nifong made countless appearances before the press, relaying Mangum's tale of lurid and hateful abuse at the hands of young athletes who already had a reputation around town for getting away with fratty excesses. He maintained that undisclosed DNA evidence supported the accusation even after he knew that it did not. Eventually it would come out that, among other irregularities, Mangum identified the three men who were eventually indicted from tainted photo lineups, that Nifong refused to see evidence that at least two of the men had documented alibis for the time of the alleged attack and that he'd withheld potentially exculpatory evidence from the defense. In 2007, Nifong's license to practice law was revoked by the North Carolina State Bar Disciplinary Committee.

The fiasco that followed Nifong's early media blitz -- from the feeble Duke administration "support" offered to the falsely accused lacrosse players to the firing of the lacrosse coach to the incendiary ad placed in the college paper by faculty members who became known as the Group of 88 to the harassment of almost everyone involved in the case to the endless, inevitable and noxious commentary extravaganzas of such cable-news vultures as Nancy Grace -- all of this followed from Nifong's highly irregular, misleading and unethical public statements, made at a time when he had access to information that no outsider possessed. Some of the most vocal participants in the controversy found that Nifong's version of events jibed perfectly with their views of the world, but without Nifong's version, backed by the authority of his office, they would have gained far less purchase.

Cohan, a contributing editor at Vanity Fair, has previously written dishy exposés of Goldman Sachs and other Wall Street institutions; the connection here is more obvious than it might appear, since lacrosse teams, it turns out, are feeders to the financial industry. Without a doubt, the three men indicted by Nifong -- declared "innocent" in an extraordinary statement made by North Carolina Attorney General Roy Cooper when the charges were dropped in 2007 -- were shabbily and unjustly treated by the city of Durham and by Duke faculty, administrators and students, as well as by the general public. Certainly, they deserve to be compensated for their ordeal, but the $30 million lawsuit they subsequently filed against Durham (on top of the undisclosed but probable $20 million they received from Duke) exacerbated the town-and-gown friction in Durham. A local columnist pointed out that $30 million was $3,664,000 more than North Carolinan Dwayne Dail was compensated for spending 18 years in prison for a rape he did not commit. The lacrosse players never spent a day in jail.

The less-acknowledged tragedy of the Duke lacrosse scandal is the damage it has done to the real victims of rape, who often struggle to be believed even though law enforcement officials estimate that only 8 percent of all rape accusations are false. Mangum's lurid lies also overshadowed the witnessed and undisputed bad behavior of the players, particularly the ugly sexual and racial epithets they hurled at the dancers. In their rush to judgment, doctrinaire Duke faculty members who pounced on the accusation as "proof "of the racism and misogyny purportedly rampant at Duke ruined any opportunity to discuss those issues constructively, as opposed to merely grandstanding. Nifong dangled his bait before many noses; few were those who resisted it. But I suspect that those who genuinely learned something from the debacle are fewer still.