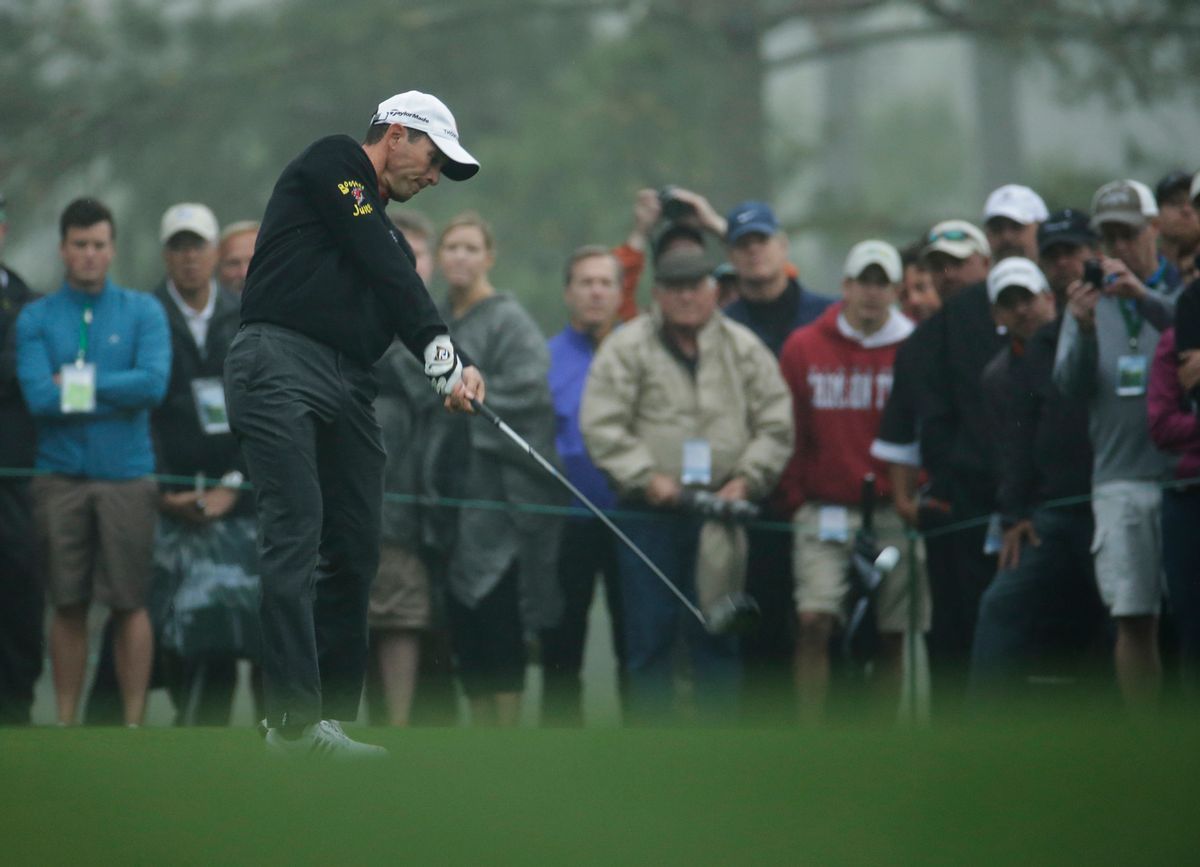 Mike Weir, of Canada, tees off on the 18th hole during a practice round for the Masters golf tournament Monday, April 7, 2014, in Augusta, Ga. (AP Photo/Charlie Riedel) (Charlie Riedel)
--

AUGUSTA, Ga. (AP) — The first full day at the Masters turned out to be a short one Monday.

Augusta National was open for only two hours because of storms, still enough time for a few players to see some of the changes to the golf course — even though this was supposed to be a year with really no change at all.

The ice storm in February that led to the demise of the famous Eisenhower Tree also cost the club countless other trees, giving Augusta a slightly different look. Instead of a forest of Georgia pines, players can see from the 10th fairway all the way across to the 15th fairway. Players couldn't help but notice the number of trees missing from the right side of the narrow, claustrophobic seventh fairway.

"You don't feel like you're going down a bowling alley as much," Brandt Snedeker said, his hair wet from wearing a visor in the rain.

The club lost thousands of limbs that were damaged from the ice storm, so many that Jimmy Walker said he saw workers up in the trees with chain saws when he came to Augusta a few weeks ago for a practice round.

"I haven't played here a ton, so I kind of got the feeling you could see down through the golf course a little bit better than you used to be able," Walker said. "I don't know if that's a good thing or a bad thing."

Some things never change. The course was starting to burst with color. The greens already had a tinge of yellow to them. And there was a buzz about the Masters, even without Tiger Woods around for the first time in 20 years because of recent back surgery.

Still, nothing stood out quite like the 17th hole.

Masters champion Adam Scott always assumed the 440-yard par 4 was a dogleg left because of the 65-foot high loblolly pine that jutted out from the left side about 220 yards from the tee, forcing shots to the right except for the big hitters who could take it over the tree.

Mike Weir is not one of the big hitters, so when asked how he found the 17th hole on Monday, the Canadian smiled.

"Much friendlier," he said. "I was playing with Jason Day. For him, it doesn't matter. He hits it high and long enough. For me, I had to hit around it. It was probably the toughest drive on the course. Now, it's much easier."

It was amazing to him to walk up the fairway and see a patch of pine straw where the tree once stood so proud and tall. Weir and several other players assumed that Augusta National would have another pine placed their before the Masters.

Maybe next year. But not this week.

The tree was such a treasure — named after former President Dwight D. Eisenhower, a club member who hit into the tree far too often — that it was taken off site for storage. The club will determine later what do with the trunk and what limbs remain.

But what a difference it has made already.

"If the tree was there, I would have hit it yesterday," said Patrick Reed, who arrived on the weekend and already got in two practice rounds. "It was cold. It was a little into the wind and I hit it down the left side. I knew exactly where the tree was, and I probably would have caught the top half of that tree and would have been underneath it."

"First three times I played this course it was there, and it made that hole really hard."

Snedeker played on Sunday with Masters rookie Harris English and said he pulled his tee shot on the 17th. Any other year, he would have hit the tree.

The rest of the course should be the same as usual. The Masters can set up the course any way it likes — difficult for scoring, or birdies that make cheers reverberate. It has trended toward excitement over the last several years, such as when Charl Schwartzel won with four straight birdies at the end, or even last year when Scott and Angel Cabrera in the last two groups each made birdie on the 18th to force a playoff.

The biggest change is likely to be the guy in a red shirt.

Woods won his fourth green jacket in 2005, though he usually kept it interesting, and always kept fans guessing. His back surgery last week means the world's No. 1 player will be out of golf until the summer, and out of the Masters for the first time in his career.

"Without Tiger here, it's a different feel," Snedeker said. "It's a different event. He does a great job of bringing energy and bringing fans out that we don't usually get."

Those fans had to leave early on Monday. By lunch, the course was closed for good.

Masters chairman Billy Payne said they would get a refund in May, and they were guaranteed a chance to get practice round tickets for next year. Woods likely will be back by then. And odds are, there will be more trees.