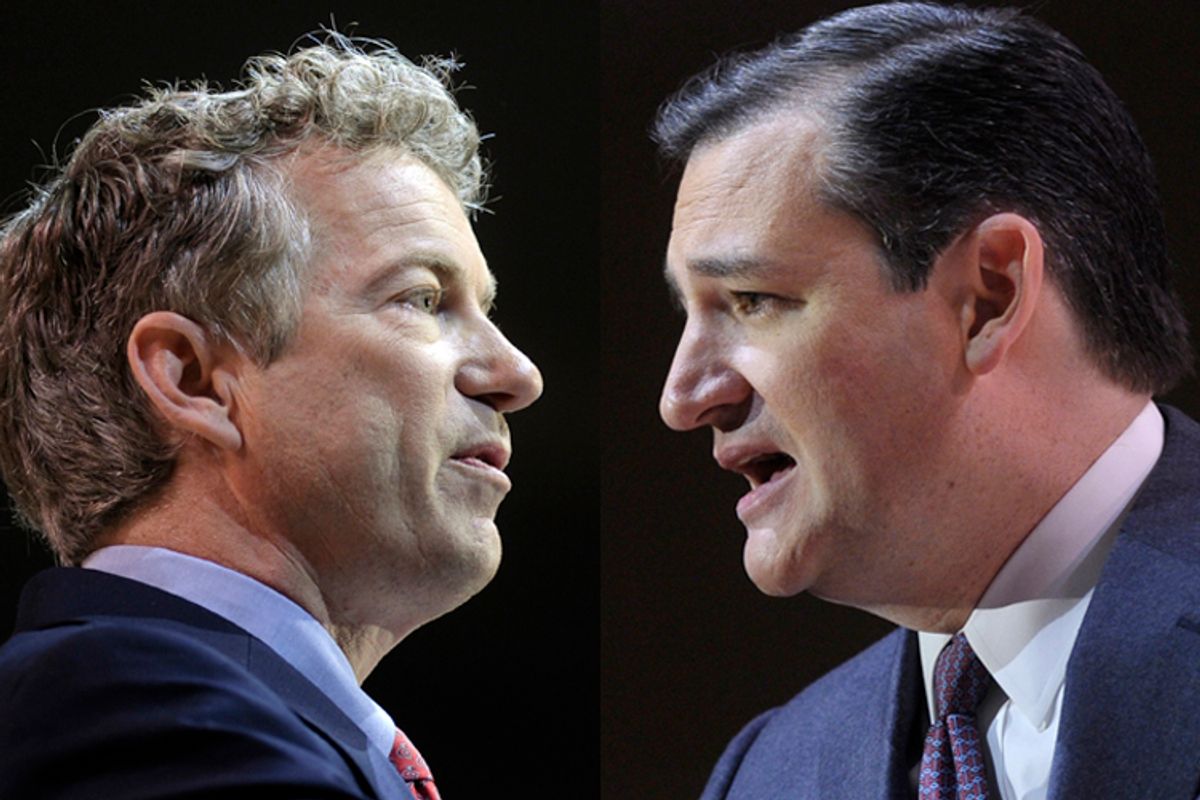 There's been a lot of chatter recently about certain GOP presidential hopefuls' religious pilgrimage to Sheldon Adelson's Venetian palace in Las Vegas to beg for dispensation from the Republican Jewish Coalition and ask for financial support from billionaire Adelson -- who promises to spend millions on the person who professes his willingness to outlaw online gambling, unequivocally support Israel and bust unions whenever possible. But another GOP religious mission last week got less notice, though it may be more significant in determining who wins the GOP primary: Senator Ted Cruz traveled to Jerry Falwell's Liberty University and gave what everyone considered to be a fiery sermon about the gathering threat to religious liberty in America.

That address was received much more raptuously than the last time a 2016 presidential hopeful appeared at Liberty U -- when Rand Paul made his infamous Wikipedia-lifted "Gattaca" speech -- and points up one of the two major battle lines between the two main contenders for the Tea Party primary. In this first skirmish, it is obvious that it's Cruz who has his finger on the pulse of the Christian Right.

But what's that got to do with the Tea Party, you might ask? The movement is supposedly kaput, having retreated with its proverbial tail between its legs after Ted Cruz embarrassingly read "Green Eggs and Ham" on the Senate floor. And anyway, Liberty U is the Christian Right, not the Tea Party.

But that fundamentally misunderstands what the Tea Party actually is. It's not a movement, it's a brand. Or, more specifically, a re-brand that was formed in the wreckage of the Bush administration's spectacular political flame-out when the True Believers badly needed to distance themselves from the GOP's failure. It is simply the conservative movement in a tri-corner hat. And that movement, as Ronald Reagan described it, famously sits on a tri-legged stool of traditional values, strong defense and small government. How those issues are emphasized is a matter of the political zeitgeist of a given time.

At the time the Tea Party allegedly sprang up out of nowhere the country was still reeling from the war in Iraq and a financial crisis that shook the economy to its core, so it naturally marketed itself around economic issues. Therefore, the Tea Party was assumed to be populated by people who cared little about social issues and defense and instead signaled the beginning of a new, highly motivated libertarian faction in the GOP. But polling showed the Tea Party largely overlapped with the Christian Right and the traditional Republican hawks. In fact, they are the same people.

And it must be noted that the right wing of American politics is inherently reactionary and always animated by certain impulses, however they might be identified at a particular time. As sociologist Theda Skocpol, author (with Vanessa Williamson) of the book "The Tea Party and the Remaking of Republican Conservatism," described them:

They are overwhelmingly older, white, conservative-minded men and women who fear that “their country” is about to be lost to mass immigration and new extensions of taxpayer-funded social programs (like the Affordable Care Act) for low- and moderate-income working-aged people, many of whom are black or brown. Fiscal conservatism is often said to be the top grassroots Tea Party priority, but Williamson and I did not find this to be true.

(They could have called themselves the "Get Off My Lawn Coalition," but Tea Party has a nicer ring to it.) That description goes to the far right's motives and those don't change much. And one can see how both Rand Paul and Ted Cruz might feel they have a claim to these voters. But only one of them really does.

When Rand Paul won his Senate election, he famously proclaimed there was "a Tea Party tidal wave" and they had "come to take their government back." And he can certainly appeal to the right's ongoing antipathy to our black and brown brothers. His history and rhetoric has proved his solidarity with those particular Tea Party/conservative movement values time and again.

But Paul has a hard time speaking the language of the Christian Right even if he is largely sympathetic to their beliefs. For instance, here's how Paul spoke about Christian values at Liberty U:

My hope, though, is that we don’t lose our appreciation of the miracle that springs forth from tiny strands of DNA. Einstein said there are two ways we can look at the world: we can either look at life as if there are no miracles or look at life and see miracles everywhere. I choose the latter.

Rand Paul would have been better off saving that speech for some New Age conference, not that he'd ever be invited to one. (I do have to give him some credit, though. Quoting Einstein at Liberty University takes some brass.) Cruz, on the other hand, hit the right-wing sweet spot. He managed to wrap alleged Christian persecution in the Constitution and tie it up with a red, white and blue bow.

These are troubled times and religious liberty, the very first liberty in the Bill of Rights, the very first protection we have, has never been more in peril than it is right now.

Which brings us to the until-recently-avoided third leg of the conservative stool: foreign policy. One gets the sense that enough time and distance from the Iraq debacle has finally passed that the hawks feel they can once more engage. And here is where the problem for Rand Paul really lies. He likes to portray himself as a man of principle in these matters, but his recent comments about the Ukraine and Russia crisis show how difficult it's going to be to thread the needle as a presidential candidate. He sounds nearly incoherent as he tries to use the traditional GOP rhetoric of "strength" and "will" while staying true to his isolationist beliefs -- and succeeds at neither.

As for his stand on civil liberties, it's been noted that the Tea Party had a very recent miraculous awakening on this issue. If Rand Paul can turn a bunch of elderly white conservatives into permanent civil liberties activists, it really will be a miracle.

By contrast, Cruz has come out swinging. He's taken a very hard line on nearly every foreign policy and national security issue that's come up in recent months and seems to be making a play for hawk of the walk. Last week he was among the first to call Iran's new Ambassador to the UN a "slap in the face" to America and use it to criticize President Obama for being "naive," the right wing's favorite descriptive term after "feckless" when talking about Democratic foreign policy.

He knows what the Tea Party really wants, and isolationism isn't it. They are mainstream Republicans on these issues:

And what about those billionaires? You'd think Rand Paul would at least have the backing of that constituency. After all, he promises to give them everything their little Randroid hearts desire. But they don't like his foreign policy either and are promising to spend whatever it takes to stop him. In fact, the only real friends Paul has in the GOP are the measly 7 percent of young, white males who call themselves libertarians.

Cruz might not be able to get a GOP majority to vote for him when it comes down to it. But he's bellied up to the Tea Party and pulled up the three-legged stool of traditional conservatism to make his appeal. Paul is teetering on a pogo stick.