The kimchi revolution: How Korean-American chefs are changing food culture 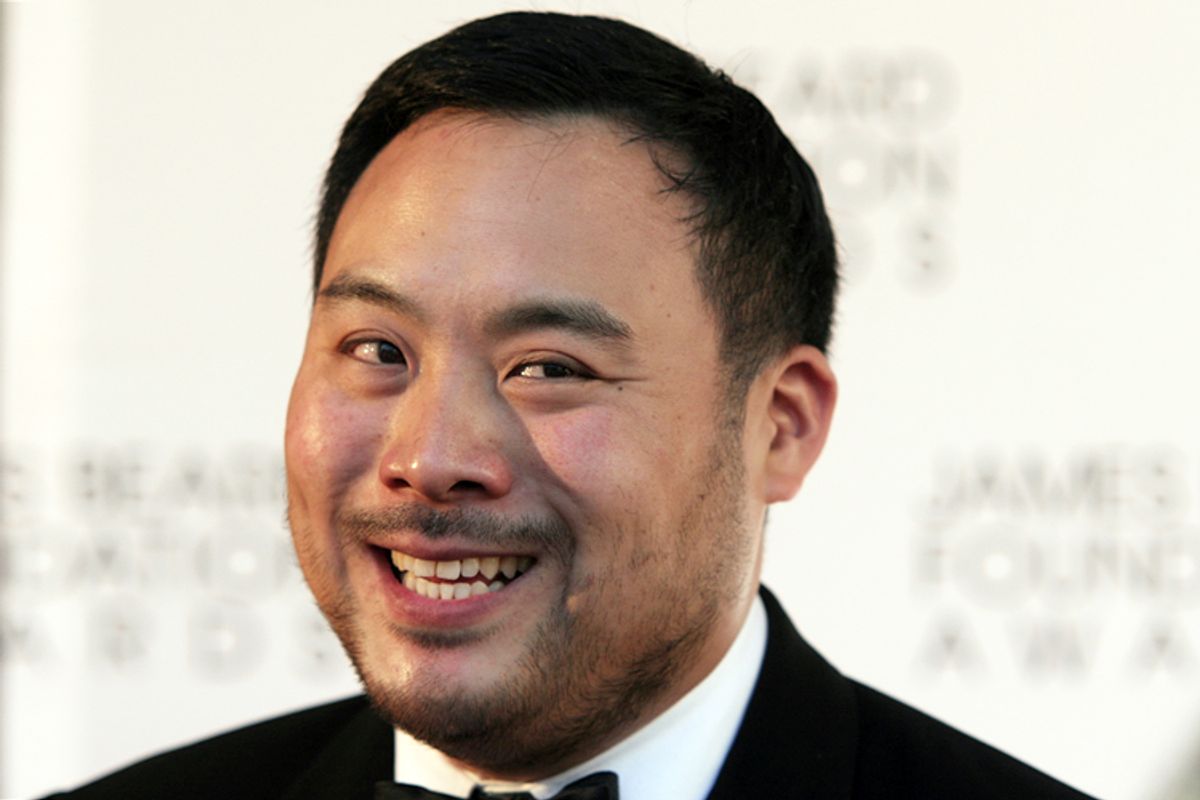 In a recent interview with food writer Michael Ruhlman, celebrity travel/food writer Anthony Bourdain said that “when you look at all the people who are sort of driving American cuisine right now, they’re all Korean American.” By “all,” he mostly meant “both,” since his list boiled down to two: David Chang and Roy Choi.

Roy Choi is best known as the L.A. Korean taco truck guy, and David Chang is the founder of the Momofuku restaurant group as well as the cult food publication "Lucky Peach." Bourdain probably intended to mention Edward Lee in this interview as well, insofar as he’d praised Lee’s cookbook, "Smoke and Pickles," by calling him one of “America’s most important young chefs.”

What’s so important about a trio of Korean-American chefs bringing kimchi to American cuisine? H-Mart has been bringing spicy pickled cabbage to the suburbs so successfully that the Korea-in-America chain is now arguably hipper than Whole Foods among East Coast elites. Trader Joe's has begun selling kimchi in a pouch and the fresh stuff is everywhere up and down the West Coast. It’s even on the shelves at Publix, the Florida-based Southern grocery store chain.

But when it’s trendy enough to get served on international flights that aren’t going to Seoul, it’s crossing a culinary line heading straight into catsup territory. Rushing out of Paris this past November, actress Ahna O’Reilly, who is lovely and not even a teensy bit Korean, tweeted: “My choice of Kimchee for dinner on the flight back to LA, maybe not the best decision I've made lately.” Traveling from France to California while burping up kimchi pretty much sums up the culinary provenance of Momofuku and friends, not the least of whom is Marja Vongerichten, Korean-American host of "The Kimchi Chronicles," 2011, and wife of French chef Jean-Georges.

When food has less to do with what the people are already buying, and more to do with the changing parameters of fickle urban palates, this is where the art of chefs comes in. Rhetorically, Bourdain asked:

As a chef, what are your responsibilities to your family heritage? ...What is authentic and do I owe anything to this notion of authenticity at all? People ask David Chang how does he describe his food, he says "tasty food."

Bourdain's repeated signaling of the "authenticity” problem echoes an argument made in the 1970s by literary critic Lionel Trillling regarding the rise of “authenticity” as the measure of moral fitness in public life. Across the span of the Industrial Age, Trillling argued, "authenticity" gradually replaced "sincerity" as the most desirable social trait.

If Bourdain puzzles over whether Chang's cuisine can be "authentic," novelist Alexander Chee sees things from the other side of the equation. "Authenticity," he confided to me, "is a bourgeois value posing as an aesthetic one." A Korean-American New Yorker from Maine whose forthcoming novel, "The Queen of the Night," is set in 19th-century Paris, Chee has just finished participating in "Beyond Kimchi," a panel on ethnicity and double consciousness held at the annual meeting of the Association of Writers and Writing Programs. Organized by novelist Marie Myung-Ok Lee, the session assembled fiction writers who were Korean and American at the same time, parsing the irritating challenges of being marginalized and assimilated. The unofficial title of the session was "Kimchi is taking over," and the takeaway was that the kimchi revolution is not limited to literature.

On the larger plane, what is becoming increasingly apparent is that cuisine has appropriated literature's power to shape popular tastes and public discourse. Food goes in, conversation comes out, minds are changed. A big mouth in every sense, Bourdain is a nodal figure linking the literary and gastronomic worlds; it is no accident that chefs Chang, Choi and Lee all have bestselling books, and Bourdain is both directly and indirectly connected to all three. The flavor profiles are Korean, but the marketing bullhorn is American.

When I asked Chee whether he thought Momofuku's dishes were authentic (even as I thought to myself, "authentic what? authentic New York?"), he remarked, drily: "David Chang is authentic for sure in that he is sincerely offering the most kickass food around." It is in glittering urban settings that the trait called "authenticity" takes on a certain degree of urgency, for as cities grew and strangers proliferated, Trilling had noted, social structures became murky and communities stopped trusting each other. In place of "love thy neighbor," the modern reflex became: “To thine own self be true.” Taken from Hamlet, the line is the mantra of the neo-hippie, the rebel rocker, and the ideologically pure politician, who share nothing in common except for a near-mystical belief that refusing to contribute to the social good is a self-evident virtue. Inside this framework, every man is king of his castle, common courtesy is for sissies, and all opinions are equally valid.

A lover of canned beer and drive-thru doughnuts, Homer Simpson exemplifies this quintessentially American stance. In the famous Fugu fish episode, he takes the knife from the Japanese sushi chef and slices the poisonous fugu up himself, muttering, “Tasty fish!” as he gulps the raw slices down. Hilariously, he'd rather risk death than betray his nuclear family values by disregarding his idiotic impulses. Now that's authentic.

Because cash-strapped, three-fingered Homer is no prodigy with a knife, his goofiness also exposes the class issues informing Bourdain's question, which ultimately has less to do with ethnicity as a marker of authenticity and more with the geopolitics of economic disparity. Bourdain now travels a lot, and he’s probably grasped, as much as a tall, middle-aged celebrity can, the startling discontinuities between ordinary third-world poverty and the first-world luxury bubble that most American tourists carry with them. When he asks, “Is it OK for a white guy to cook traditional northern Thai food and make money off it? ... Is it OK for Paula Deen to make money off of traditional African American recipes,” what he’s really asking is at what point cultural appropriation becomes exploitative inside a global economy that profits off the backs of brown bodies that consumers don’t like to talk about, especially when their mouths are full with exquisite morsels of deliciousness.

Must good food also be ethically “good”? Or is it only required to be “tasty”? Who gets to decide what food is morally fit for the body politic: the chef,  the corporation or the consumer? Is the only authentic food the kind that gets served in tiny taquerias and food trucks so defiant of mainstream culture that most customers don't know they exist, let alone where to find them?

Bourdain places Choi squarely in the middle of the fray, seeing him as a class-bridging figure whose street food is also redefining the parameters of desirable food that is also "authentic," or morally defensible in a world where access to fresh meat, fruit and vegetables is increasingly an upper-class privilege. Cultural critic Alison Pearlman explains:

What makes Choi such a dynamic figure today is more than his multicultural culinary creativity… It's also his social creativity, his willingness to think about how top chefs can bring communities outside the foodie mainstream into the fold by devising healthful and innovative dishes that respect people's existing tastes.

For Pearlman, Choi is expanding the role of chef to include social change, by fully accepting that accessible food can be good food in every sense of the word.  He’s “authentic” not because his cuisine is Korean-(Mexican) American and thus exemplary of L.A., but because he refuses to disguise his hardscrabble roots with Béchamel sauce and fancy tablecloths.

Creating street food with snob appeal is the nouveau-Korean way, but it also coincides with an American bootstrap narrative that starts with poverty and ends with success through hard work and creativity. In a 2013 interview with NPR about his "new Southern cooking," chef  Edward Lee of 610 Magnolia in Louisville, Ky., commented: "My first vinegary, salty bite of braised collards ... took me back to the experience of eating cabbage kimchi, another precious dish that arose from poverty but has come to impress even the most sophisticated palates." Kimchi from cabbage is the new lemonade from lemons.

What's missing from all of this is the fact that kimchi comes in 187 official versions, not including the variations that your mother or the church ladies made, and the different versions reflect class hierarchies just as clearly as button mushrooms vs. truffles. To get beyond kimchi, in other words, is to get over the question of authenticity and ask, instead, who gets it, who doesn't, and why it matters. From haute cuisine to 김치, the postmodern chef now stands at the vexed boundary between poverty and privilege, a vigilant guardian with a knife in one hand and a smartphone in the other.