I asked why a "Daily Show" warm-up targeted African-Americans and a woman in a wheelchair. The host wasn't happy 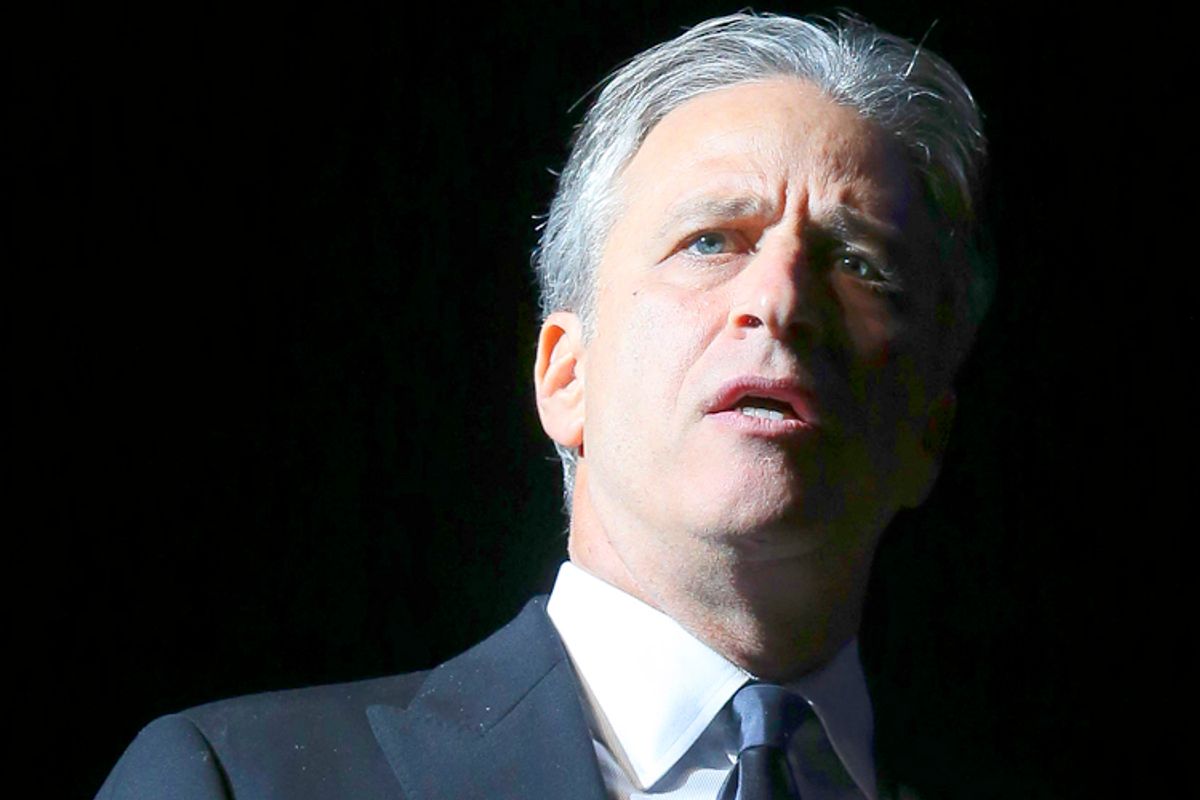 The furor about #CancelColbert revives a memory for me: the time that Jon Stewart publicly cussed me out at “The Daily Show.” Ever since then, I’ve wondered who gets to decide what’s funny -- and who needs to get a sense of humor.

This happened in April 2008, when I sat in the studio audience of “The Daily Show.” I was a big fan of the way the show used comedy to expose injustice; I was psyched to see Stewart in person for the first time. But before the taping began, a comedian came out to warm up the crowd.

To me, he seemed like a curious choice: This white man told racist and misogynist jokes. He joked about greedy Jews, and Caribbean women spitting before they cross the street. He singled out people in the audience as his target: a married African-American couple, and even a white lesbian in a wheelchair. It was their blackness itself that he found funny, her lesbianism, her disability. (He also picked on a white New Jersey family, but I’m originally from Jersey, and we’re fair game — also, he didn’t pick on their whiteness.)

This kind of humor warms me up in the wrong way.  Since I was 6, I’ve dealt with people telling jokes at my expense and expecting me to laugh: “Oh, you know I’m just kidding!” At one job interview, they told me I was a shoo-in, because one of the bosses had a thing for Asian women, ha-ha! I know all about acting tolerant, friendly and forgiving, because it’s social suicide to come off as humorless. I’ve given the benefit of the doubt to all kinds of people who were clueless, or well intentioned, whatever that means, or downright racist, so that I won’t sound like a joyless harridan.

The mostly white audience laughed. Maybe they found the routine agreeable and compelling; maybe they were trying to be nice. They weren’t laughing because the jokes were witty, original or successful at doing what “The Daily Show” (and “Colbert Report”) is famous for: skewering and satirizing bigotry, to turn the joke on the bigots. And the scapegoats also laughed. Maybe they were more tolerant, friendly and forgiving than I was. But nobody should have to be that tolerant. Nobody should have to make that judgment call, while the straight white guy with the mic is disparaging you, and hundreds of straight white people are laughing at you, expecting you to be a good sport. Nobody should have to go home afterward, wondering if you had truly been amused, or if you had felt pressured to behave that way, or if you had felt too humiliated, too little, to mount your own self-defense.

Then Jon Stewart came onstage to take a couple questions from the audience.

I believed in him. I believed in the subversive political humor of his show; I believed that he was delivering messages in a way the mainstream news media should take notice of. I believed that somebody had to speak for the scapegoats, and that a live-audience question to the boss would change things more effectively than a letter to the network. I believed that, if Stewart knew that his warm-up comic had been making invasive, racist gibes about a black couple’s sex life, he couldn’t possibly countenance it.

So I raised my hand and asked, “Why does your warm-up comedian use ethnic humor?”

In retrospect, I should have phrased it more accurately: Why does your show use a comedian whose politics and belief system are so clearly at odds with the show’s? Why is this kind of prejudice being associated with “The Daily Show”? But I was nervous; I didn’t rehearse my question beforehand; I felt I had no time to lose. My tone wasn’t combative, only curious. I didn’t see Stewart as a big media producer on a schedule: I saw him as a person who cared, who asked the same kind of questions I believed in asking.

Stewart’s face creased with annoyance. He said, shortly, loudly, glaring at me, “BECAUSE. IT’S. FUCKING. FUNNY.”  The audience erupted into wild applause.

Meanwhile, he stared at me with palpable hostility. Once the applause had died down, he added, “Don’t you even watch the show?” He turned to his desk and scrawled a couple notes; he took a question about the set design, but his mood had visibly soured. People sitting around me stared at me and whispered.

[We asked "The Daily Show" for comment, relating to them the date, the question posed by Alison Kinney, and Stewart's response. On the show's behalf, a spokesperson for Comedy Central told us: “We don't recall this incident and we haven't read the essay or the accusations in it, but, in general, we aren't looking for our audience to have a terrible time when they attend a taping. When we do receive complaints about content, either during warm-up or during the program, we attempt to address them promptly.”]

I felt sick all through the taping and for several days afterward. I was upset with myself for not framing the question in a way he would sympathize with. I felt guilty about raising a kerfuffle. I felt like a killjoy; I felt very conscious of having been one of the few non-white people in the audience.

And I also felt that if Stewart watched his own show, then he would know why the warm-up act sucked. It wasn’t funny, and it didn’t go anywhere toward meeting the level of the show’s comedy writing or political commentary. It was just racist, sexist, homophobic, ableist. It was the kind of material that the show invests much of its money and time in satirizing.

People who’ve worked in late-night TV have told me that Stewart probably had no idea what happened in the warm-up. And that a host depends on the warm-up to create a certain mood, and that I had chosen a tough moment for him to respond without alienating the crowd.  But I also know that there’s something wrong with a crowd getting pumped and put into the right mood by belittling minorities and women.  And I know that on the David Letterman show, for example, the writing team aimed always to satirize the powerful, rather than bullying their victims; to mock voluntary shenanigans, and not circumstances outside people’s control. That is how ethical comedy works. And if somebody raises a criticism about the content, the ethical way to respond is not to automatically silence the critics.

All Stewart had to say was, “Shoot us an email with your concerns, and somebody on staff will look into it.”  Or, “Whoa, I don’t know anything about the warm-up — that’s somebody else’s job.”  But his response was bullying. Hostile. Dismissive.

This brings me to #CancelColbert. The controversy has unleashed a reaction so much uglier and less nuanced than debates about intention and satire. Death and rape threats are being made against an Asian woman and her supporters, many of them women of color, to punish them for supposedly misunderstanding anti-racist rhetoric. To punish them for not having a sense of humor.

In the show’s broadcast response, the moment that stood out to me was when Colbert broke character to speak of Park as being “viciously attacked on Twitter, and if anyone is doing that for me, I want you to stop right now.” There followed a brief moment of silence, devoid of the self-congratulatory cheering of his fans: Colbert, or whoever was writing for him, was taking them to task. But that crucially serious moment lasted only a few seconds; it got lost amid the jokes.

Since the broadcast, Colbert’s pumped-up fans have escalated the threats against Suey Park.

That moment of earnestness only demonstrated the trickiness of using comedy for social commentary. I don’t doubt that the “Colbert Report” writers were making the point that violence against women is unacceptable. But they didn’t seem to anticipate the possibility that Colbert’s warning might also be taken for a good laugh. The show’s writers — Colbert himself — are not responsible for the impact of their material, for their fans’ bigotry, or for the escalation of violence, but their decision to place an anti-harassment message within a satirical context shows a lack of foresight, imagination and political awareness. It wasn’t good writing.

All successful comedy takes us to a risky place, shocks our complacency and challenges us. When a comic defends bigotry, soliciting applause from hundreds of people who look like him, that shakes up nobody’s complacency. When a comedy show puts all the heavy work into writing funny lines, while the woman they’re writing about is being threatened with murder and rape, they aren’t reaching for a risky place. Suey Park is the person at risk. And that isn’t fucking funny.