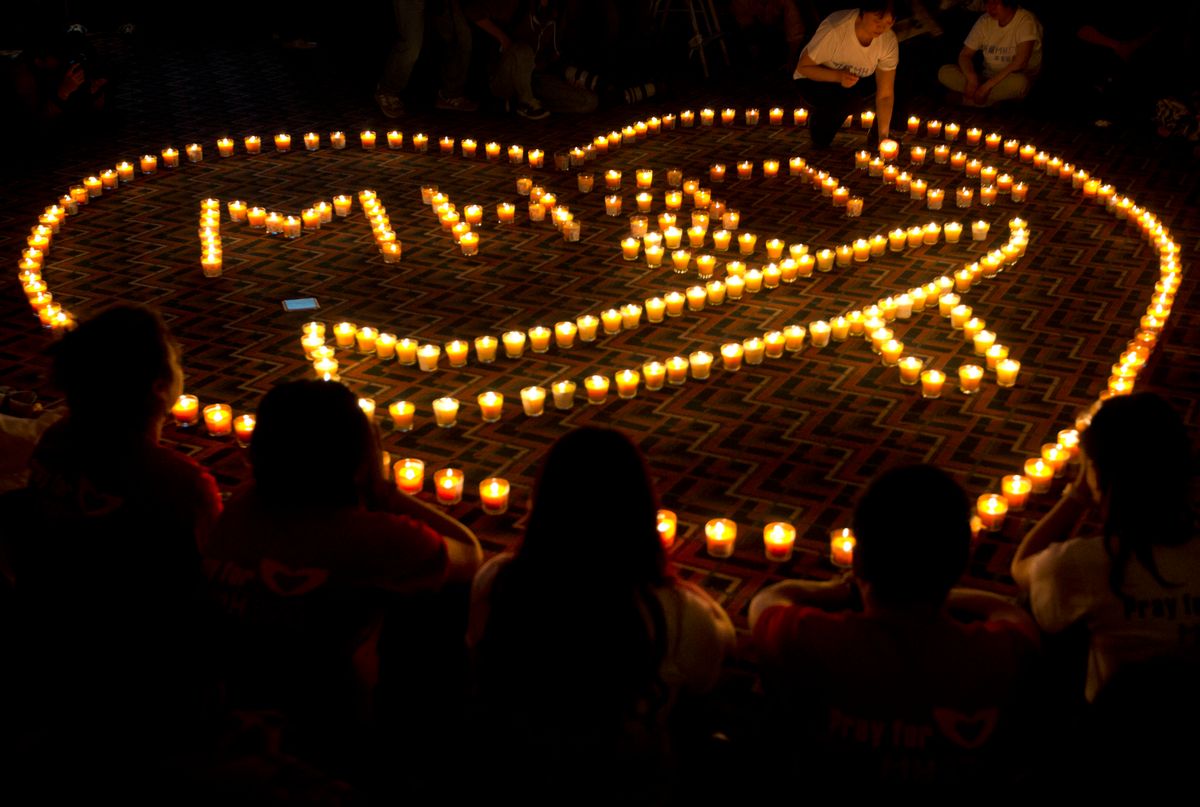 A woman arranges a candle as relatives of Chinese passengers onboard Malaysia Airlines Flight 370 offer prayer during a candlelight vigil for their loved ones at a hotel in Beijing, China, late Tuesday, April 8, 2014. An Australian ship is reported to have detected two distinct, long-lasting sounds underwater that are consistent with the 'pings' signal from aircraft black boxes, and is being seen as a possible advance in the month long hunt for the missing Malaysia Airlines jet, but the 'pings' still have to be verified. (AP Photo/Andy Wong) (AP)
--

Yesterday held promising developments in the search for missing Malaysia Airlines Flight MH370. The Australian ship Ocean Shield, which is towing a U.S. Navy black box detector, picked up two more "pings" that were potentially from the plane's black box beacons. The beacons -- one for the data recorder and one for the cockpit voice recorder -- activate upon contact with water and have a battery life of 30 days.

Retired Air Chief Marshal Angus Houston, who is leading the joint search, called the latest pings "encouraging information." Locating the black box would help the search team find the wreckage, and possibly solve the mystery of why MH370 veered off course and ended in the Indian Ocean.

"I believe we are searching in the right area," Houston told reporters at a briefing in Perth, Australia. "But we need to visually identify aircraft wreckage before we can confirm with certainty that this is the final resting place of MH370. For the sake of the 239 families, this is absolutely imperative."

The first two pings were heard by Ocean Shield on Saturday at 4:45 p.m. and 9:27 p.m. Perth time. One was heard for two hours and 20 minutes, the other for just 13 minutes. "The analysis determined that a very stable, distinct, and clear signal was detected at 33.331 kilohertz and that it consistently pulsed at a 1.106 second interval," Houston told reporters. "They, therefore, assess that the transmission was not of natural origin and was likely sourced from specific electronic equipment." Investigators are concluding that the signals are consistent with those from a black box, which generally transmits at 37.5 kilohertz.

On Monday, no pings were heard, sparking fears that both beacons' batteries had worn down. The search for both floating and submerged debris is currently concentrated in an area of the southern Indian Ocean 1,100 miles northwest of Perth.

Houston said they would use the Ocean Shield and black box detector (towed at 10,000 feet) for as long as possible before deploying underwater drones. Starting an underwater search with such scant data would be a very long process. Houston also explains that detection equipment on the black box detector is more sophisticated than submarine sonar. The Washington Post has a fascinating graphic to put the ocean depths into perspective.

The Joint Agency Coordination Center said that 15 aircraft -- both civilian and military -- and 14 ships were engaged in the search. Divers are also engaging in the search for floating debris.

The Boeing 777 plane, its 227 passengers and 12 crew members went missing one month ago during a routine flight from Kuala Lumpur to Beijing.