Why Stephen Colbert is dangerous -- and invaluable 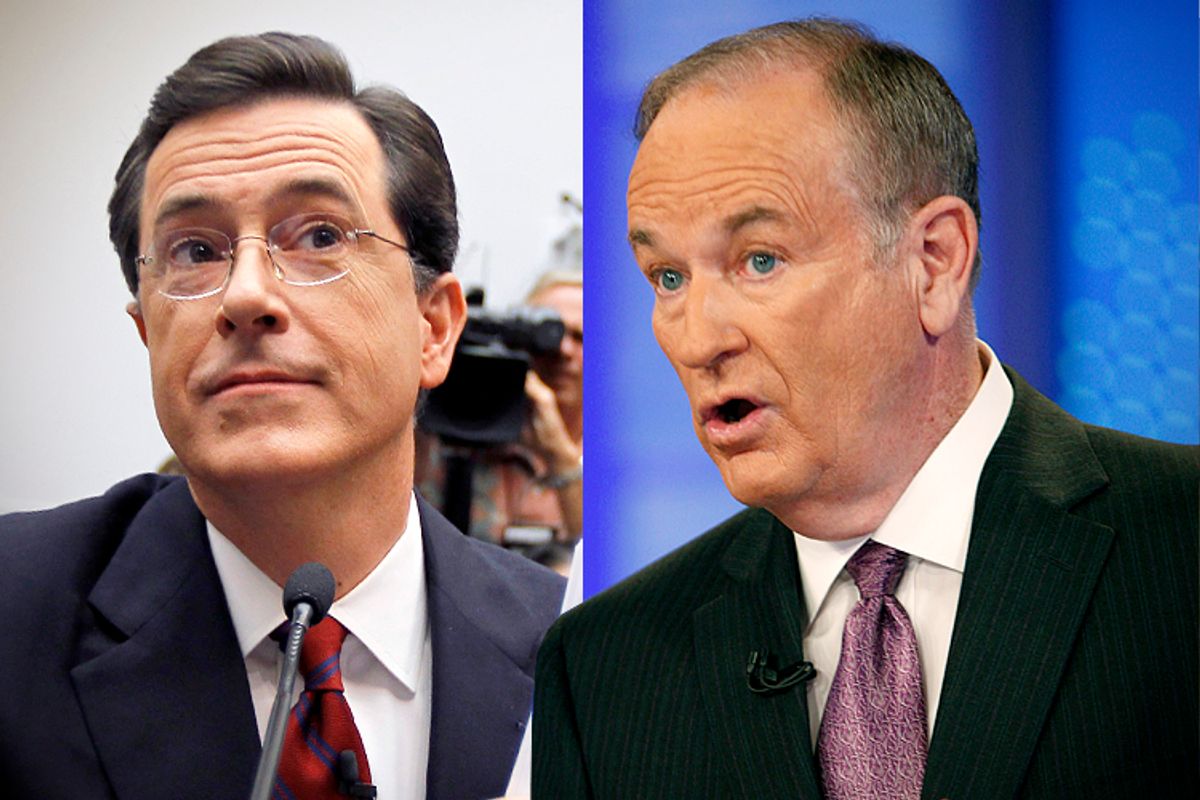 Fox bully Bill O’Reilly used to at least pretend to play along with Stephen Colbert’s satire. The man Colbert lampooned as “Papa Bear” periodically even left his Fox den and came over to Comedy Central to sit down with Colbert, to be a good sport, as though he could handle satire as homage, the price of his fame.

O’Reilly’s fame has only grown over the years, but his ability to tolerate Colbert’s spoof has withered. O’Reilly has emerged as the angry red face of white grievance, our greatest race hustler, telling his older, white male audience that they’re right to resent our black president and the changing America he leads. This meaner, angrier Bill O’Reilly is no longer tolerating Colbert’s satire but shrilly campaigning against him, with a meltdown on Tuesday night that called the comedian a “deceiver” peddling “shameful” lies that “damage” the country.

What set him off? A relatively harmless spoof of the Fox host’s recent freak-outs over the politics of inequality. A classic O’Reilly exercise in bad faith, his segments have asserted that Democrats want to make everybody “equal,” and since he’ll never play basketball like Shaquille O’Neal, or be as kind as Mother Teresa, equality is impossible and Obama and the Democrats are destroying a once-great nation by demanding it.

Colbert captured O’Reilly’s trademark faulty logic and paranoia by making a long list of things O’Reilly will never be “equal” to – he’ll never be “as mature as a toddler,” for instance – and concluded that because the Fox host will never play basketball as well as Shaq, “the top 1 percent should control 40 percent of the nation’s wealth.” It was a jaunty spoof of the way rich Republicans deliberately misrepresent the goals of people who are concerned that we’ve returned to Gilded Age levels of income inequality.

And O’Reilly lost it. He attacked Colbert as “one of the biggest mouthpieces for the progressive movement” and “the darling of the far-left Internet.” (He obviously slept through the #CancelColbert controversy.) He accused him of believing in the version of equality practiced by communist China and the former Soviet Union.

Like many ideological fanatics, Colbert is misguided in the extreme … He’s a true progressive believer playing exclusively to other believers. Colbert can be dismissed as clueless, but the guy does do damage because he gives cover to powerful people who are selling Americans a big lie that this country is bad.

Watching O’Reilly’s meltdown made it viscerally clear why it was so hard for me to watch the #CancelColbert car crash, at every level. It’s not that I think every one of Colbert’s jokes is funny. It’s not that he never gets anything wrong. I speak as someone who was personally mocked as a crazy liberal –with a short clip of my talking about “gun nuts” on MSNBC -- during Colbert and Jon Stewart’s misguided October 2010 “Rally to Restore Sanity.” I didn’t enjoy that.

But I enjoyed it much less when the unhinged O’Reilly told me I had blood on my hands for defending Dr. George Tiller after he was murdered by an antiabortion zealot, and thousands of O’Reilly-bots came after me with threatening, abusive email, social media comments and good old-fashioned snail-mail hate mail. Now O’Reilly has marked Colbert as an enemy, too, and not merely a competitor. Colbert is under his skin, and I’m grateful for that.

For four nights a week, over the last nine years, Colbert has calmly and brilliantly inhabited a persona that puts him in the psyche of delusional, entitled, wealthy conservative white men like O’Reilly, bullies who want their country back, and are willing to do plenty of damage as they try (but ultimately fail) to retrieve it.  Hey, it’s only humor, but it’s made it clear to those bullies that time, and demography, are their enemies, and it’s made it harder for them to recruit young people, particularly young white people, to their right-wing backward-looking pity party. That’s important.

Those bullies see Colbert clearly as an ally to progressive causes and a threat to their privilege, and that should be just as clear to progressives. Sadly we’re having a moment when it’s OK to suggest we don’t want certain people on “our side,” even if they want to be on “our side,” and that bewilders me. I just know I’m on Colbert’s side.