Tea Partyers in the House plot to overthrow John Boehner

Election 2014 is still months away, but hardcore conservatives in Congress are already planning for the future 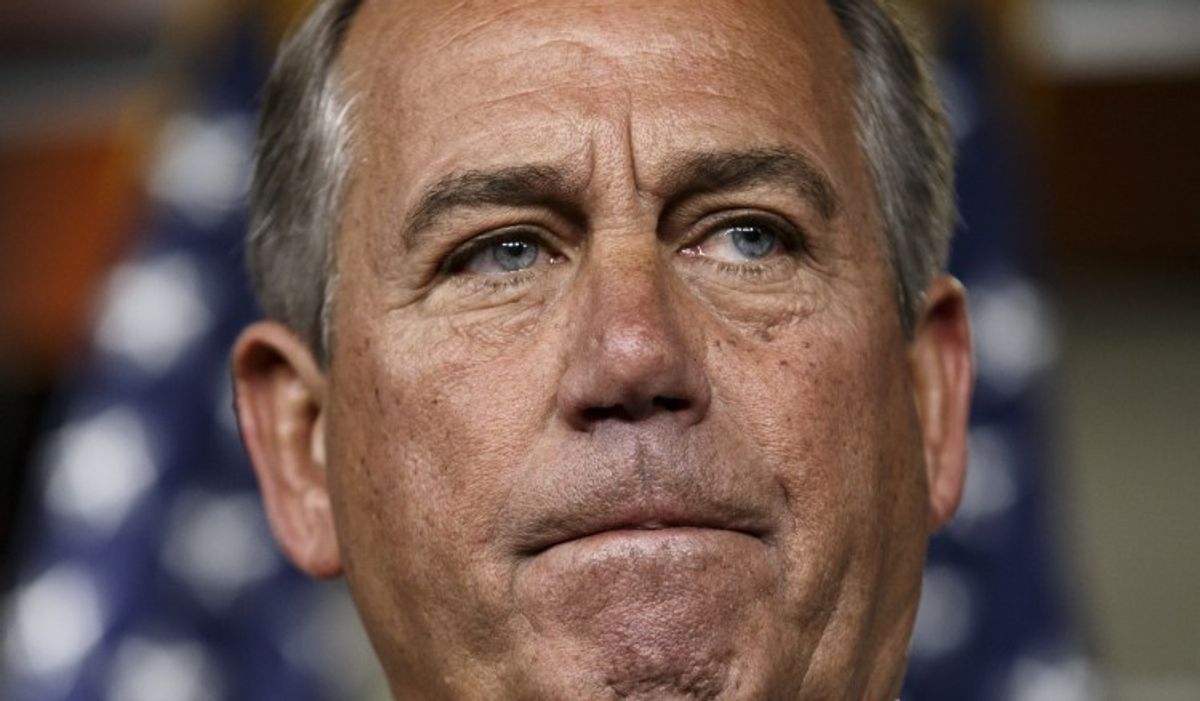 Speaker of the House John Boehner has always had a testy relationship with the right-most members of his caucus, the Tea Partyers who were most instrumental in forcing last year's government shutdown. They've tried to overthrow him as speaker at least once, and have always looked at him suspiciously, believing (correctly) that he is far more of an old-fashioned D.C. hack than a revolutionary right-wing reactionary. The two sides have been in something of a détente throughout 2014; but that may be about to change.

According to a report from National Journal, a small group of House conservatives have been trying to figure out the best way to oust Boehner as speaker after this year's midterm elections and replace him with either a true believer or a pliant Eric Cantor who is dependent upon the caucus' far-right members for support. The plotting has been done surreptitiously, so it's not clear who, exactly, is leading the movement — but National Journal says Tea Party stalwarts like Idaho's Raul Labrador and Michigan's Justin Amash are deeply involved.

When asked by National Journal to explain why Boehner needs to go, one of the members of the conspiracy said (anonymously, of course): "There are no big ideas coming out of the conference. Our leadership expects to coast through this election by banking on everyone's hatred for Obamacare. There's nothing big being done. We're reshuffling chairs on the Titanic."

It's tempting to dismiss this latest planned putsch, of course, keeping in mind that this same cast of characters has been trying (and failing) to do as much for years. But, this time, there's potentially one big difference: According to National Journal, supporters of a change in leadership say they've gotten 40-50 verbal commitments from fellow GOP members of Congress to not vote to reauthorize Boehner as speaker in 2015. If that's true, it could make it all but impossible for Boehner to retain the speakership without relying on Democratic votes.

Still, they need a candidate for replacement. And they're finding that's much more difficult than one might think. More from National Journal:

[C]onservative plotters promise that, unlike 15 months ago, they've got the numbers to prevent that from happening. Even if they can't recruit an alternative to pit against him, they'll tell Boehner in the November conference meeting that they plan to vote against him on the House floor in January "until kingdom come," one GOP lawmaker said.

It's similar to the strategy conservatives used in 1998 to depose Speaker Newt Gingrich, who gave up his gavel in November once it became apparent that conservatives had the numbers to block his reelection on the floor in January. In this case, Boehner won't be able to win a majority vote of the House if a large bloc of conservatives sticks together and votes against him. Sooner rather than later, the conservatives predict, the speaker would spare himself that humiliation and step aside.

But as of yet, there is no sign of a serious conservative challenger willing to run for a top leadership job, let alone for Boehner's.

Organizers are actively recruiting two highly respected conservatives—Jeb Hensarling of Texas and Jim Jordan of Ohio—hoping that one will agree to lead their opposition movement. But both have told colleagues they aren't interested. And the other frequently discussed scenarios, such as RSC Chairman Steve Scalise running for whip, would hardly qualify as the splash conservatives are determined to make.

The attempted overthrow in 2013 failed in part because conservatives didn't have an alternative candidate for on-the-fence Republicans to rally around. Now, with each passing day, organizers fear history could repeat itself.