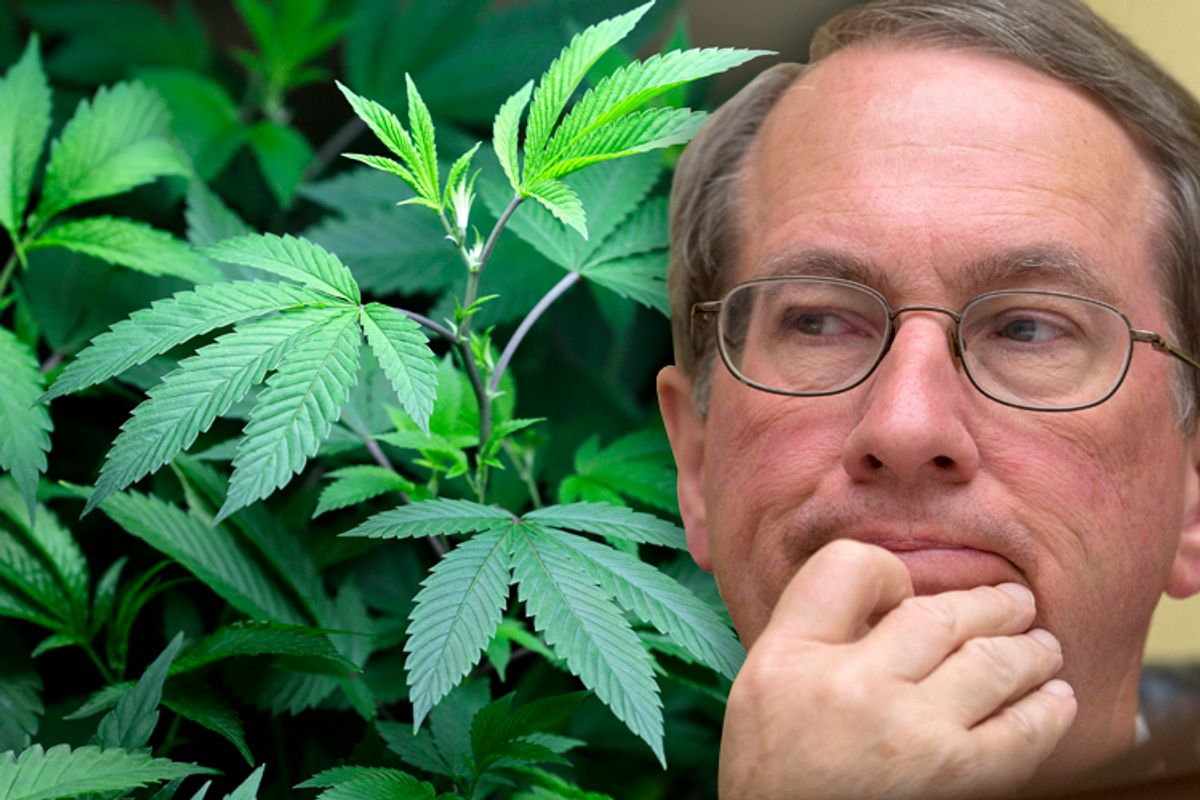 Some days you wonder how much Eric Holder can really like his job. Like last week when the A.G. testified before Congress and got it coming and going on the subject of legalized marijuana. If he were a toking man (and I'm sure he isn't) he'd have been justified in going home and sparking up a spliff the size of Colorado. After all, he, an African-American, had to sit there and listen politely to a bunch of white conservatives criticize "states' rights" and insist that he deploy his jack-booted federal thugs to put a stop to it.

You heard that right. The party that has made a fetish of states' rights ever since ... well, ever since about 1776 ... attacked the big bad federal government for failing to uphold federal law against the express wishes of the citizens of the sovereign states who went to the ballot box to legalize marijuana. It seems we've misunderstood all these years:  The states are only sovereign when they're denying equal rights to their citizens. If they think that individuals have a right to use a reasonably harmless substance that brings both pleasure and pain relief, the federal government has an obligation to intervene. Good to know.

Rep. Bob Goodlatte, the chairman of the committee, thundered:

The Justice Department’s decision not to enforce the Controlled Substances Act in states whose laws violate federal law is not a valid exercise of prosecutorial discretion, but a formal, department-wide policy of selective non-enforcement of an Act of Congress.

On the other hand, one might try to make the argument that Democrats on the committee were being hypocritical as well in defending the states' right to legalize pot. But that would be wrong. Their argument was perfectly consistent with the prevailing view that all citizens, regardless of the state they live in, should be allowed to use marijuana, particularly for medical use. Democratic Rep. Steve Cohen pointedly asked the attorney general why the administration hasn't used its executive power to fix the absurd designation of marijuana as a Schedule I drug, which likens it to morphine and methamphetamine.

“There are certainly medical bases…for multiple sclerosis, for children with epilepsy and seizures, and so it has medical benefit. Schedule I says no medical benefit. Well, that’s just fallacious. … Why will you not act? ... Why won’t the administration act with the pen and the phone to help people out?"

The attorney general said he believed the administration had acted in a responsible way and implied the notion that marijuana had some medical use was something about which reasonable people differed. (He should have a talk with Dr Sanjay Gupta, a doctor the president once wanted to nominate for the office of surgeon general.) And, needless to say, the rationale undergirding the government's policy --- namely that marijuana is a "gateway drug" --- is unreasonable in the extreme. Tens of millions of Americans all the way up to the age of 70 can testify that is not correct. Indeed, by their logic mother's milk is a gateway drug --- after all, most hardcore drug users started off guzzling that substance every four hours or so from birth.

And then there's that pesky democracy thing. Since marijuana has been used for many decades by millions of people without even one full-blown outbreak of reefer madness and it doesn't infringe in any way on the rights of those who don't want to use it, it's hard to see why the public opinion on this shouldn't be something that's subject to decision making by the people. And the people are clear on where they stand on this:

So why is the Democratic administration that came so far on gay marriage in such a short time still balking on using its power to go with the times on marijuana? It's simple, really. They are afraid of being perceived as "soft on crime," the stalest trope of the modern era. It's so pervasive that according to this New York Times article even Democratic governors in blue states like California and Connecticut (with majority support among the citizens) refuse to consider endorsing legalization.

This fear goes deep into the collective American political psyche and usually relates to race and left-wing politics, both of which have close associations with marijuana. As Rick Perlstein illustrated in "Nixonland," his epic history of the late '60s and early '70s, Republican code words for racial issues and broader cultural unrest was  "States' Rights" in the South and "Law and Order" in the North. And ever since then, Democratic politicians have been living in fear of becoming tarred with the unruly hippies and "urban" unrest (if you know what I mean). Not that the current discussion has anything to do with that, or that a politician will be hurt by taking this popular stand:

There is little evidence in most states that a politician would pay a price for supporting legalization, said Anna Greenberg, a Democratic pollster. “We’ve moved into a frame that’s not ideological, “ she said. “It’s about a system being broken, not working, and that legalization involves strict regulation that would allow the state to collect revenues. That makes a lot of sense to the kind of voters that electeds are most concerned about. If that’s the way it’s being discussed, it isn’t a liability for a politician.”

Some, like California's Jerry Brown, probably are scarred by their (relatively) youthful encounters with rabid conservatives, thinking it will reignite the old "Governor Moonbeam" stereotype. But it's clear that most of them are just following their finely honed instinct for avoiding taking a leadership position on anything. (That won't stop them from basking in the popularity of the policy if the people and the courts manage to make it happen, so they have that to look forward to.)

All of which is to say that Democratic congressmen like Steve Cohen (from that bastion of liberalism Tennessee) really do deserve some accolades from progressive Democrats. He took a rational, sane, decent public position on a hot issue -- a position that happens to be shared by the vast majority of the people in his party and a majority of people in the country. That practically makes him a unicorn in Democratic Party politics.