6 most absurd things the Christian right has blamed on gays 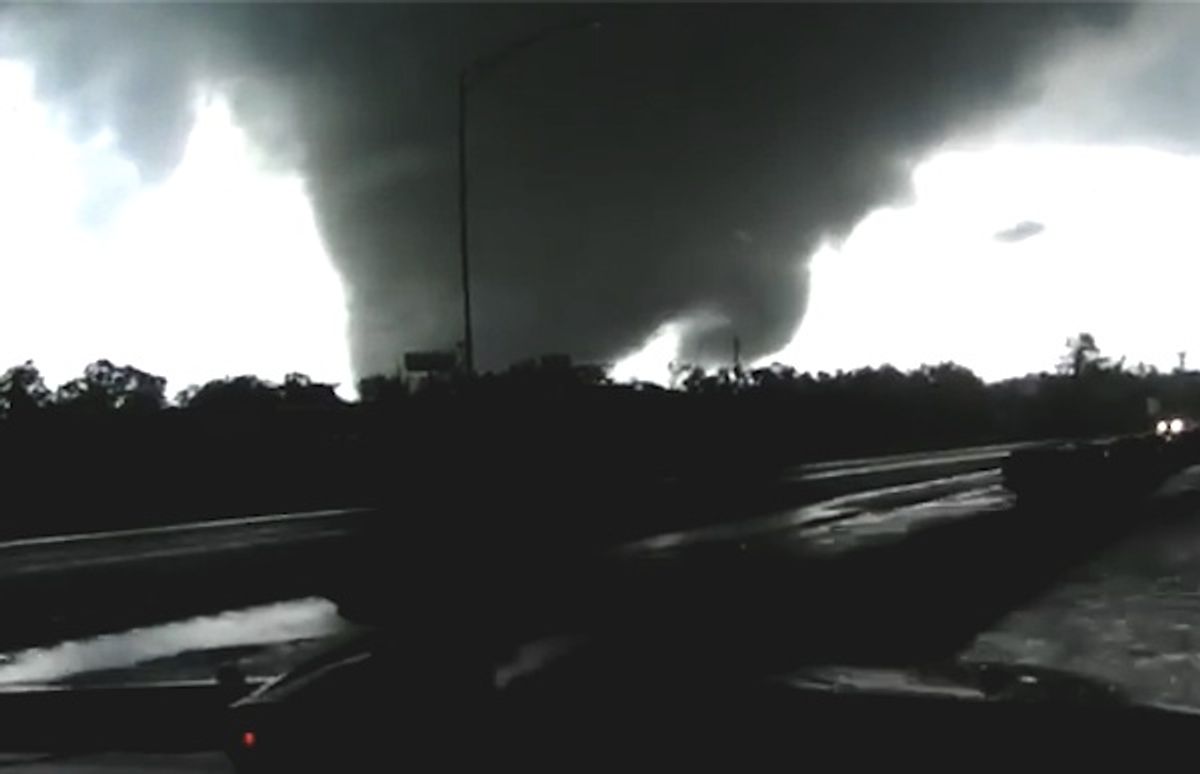 “We have displeased the Lord and the earth is going to answer,” so-called prophet Cindy Jacobs warned in advance of the Supreme Court’s ruling on the Defense of Marriage Act last summer. If this warning sounds familiar, it should: right wingers have a long history of blaming everything from earthquakes to recession to climate change on the advance of gay marriage, and they’re only getting more ridiculous.

Susanne Atanus, the GOP nominee for the Illinois 9th, is the most recent conservative to blame ills and plagues on gay marriage, and she’s not choosy. She told the Daily Herald earlier this year that God had visited everything from tornados to autism and dementia upon the earth as punishment for gay marriage.

"Everybody knows that God controls weather," she said in the Windy City Times. "God is super angry. Gay marriage is not appropriate, and it doesn't look right, and it breeds AIDS."

She was a candidate for the GOP nomination when she said that. A few weeks ago she won the primary by five percentage points.

Something about floods brings out the biblical in conservatives. At least that’s one possible explanation for British politician David Silvester’s blaming recent floods on gay marriage. After British Prime Minister David Cameron went “arrogantly against the gospel” and changed the law to allow same-sex marriages, Silvester said the country had been “beset by storms.”

He insisted this did not make him homophobic. “If you love a person enough to want them to be healed and to have a proper family, that is hardly homophobic,” Silvester said. “It's not what I say, it's what the Bible says.”

He was then suspended by his party.

Perhaps the banner case of blaming gay marriage came in the days after the September 11 attacks on the World Trade Center. Noting that the attack on the Twin Towers was the first attack on the U.S. soil since the War of 1812, and apparently concluding that the only thing that changed in those 189 years was The Gays, Falwell blamed gays and lesbians, along with the ACLU and other organizations who abetted their creeping presence in American life.

“I really believe that the pagans, and the abortionists, and the feminists, and the gays and the lesbians who are actively trying to make that an alternative lifestyle, the ACLU, People For the American Way—all of them who have tried to secularize America—I point the finger in their face and say ‘you helped this happen,’” Falwell said.

The comments caused outrage at the time, but he wasn’t the last person to make the link. Eleven years later, Roberto Miranda of the COPAHNI Fellowship of Hispanic Pastors of New England made the connection geographically specific, blaming Boston’s acceptance of the homosexual lifestyle for the fact that some of the 9/11 hijackers took off from Logan.

“Is it exaggerated to see prophetic significance in the fact that on September 11, 2001 Boston served as the point of departure for the deadly forces that spread so much destruction and havoc in this nation and all over the world?” asked Miranda, shortly before endorsing GOP presidential nominee Mitt Romney. “What took place at the material level is now being carried out at the moral and spiritual level, as the virus of homosexuality and gay marriage begins to spread dramatically all over this nation and perhaps the world.”

Fair warning: steer clear of homosexuality, or terrorists will use your airport as a hub.

Gay marriage doesn’t just cause singular events like tornados and terrorism. It can also cause recessions, according to Rick Santorum, who blamed the implosion of the financial sector in 2008 on the moral breakdown caused by gay marriage’s societal corrosion.

“Letting the family break down and in fact encouraging it and inciting more breakdown through this whole redefinition of marriage debate, and not supporting strong nuclear families and not supporting and standing up for the dignity of human life,” Santorum told American Family Radio in the runup to his failed 2012 primary run. “Those lead to a society that’s broken.”

Redefining marriage not only causes recessions but undermines the entire edifice of capitalism. “If you look at the root cause of the economic problems that we’re dealing with on Wall Street and Main Street I might add, from 2008, they were huge moral failings,” Santorum said. “And you can’t say that we’re gonna take morality out of the public square, morality out of our schools, God out of our schools, and then expect people to behave decently in a country that requires, capitalism requires some strong modicum of moral consciousness if it’s gonna be successful.”

Blaming major natural disasters on “the homosexuals” is a time-honored right-wing pastime. Pastor John Hagee, a religious right figure from San Antonio, entered a classic in the genre when he blamed Hurricane Katrina’s destruction of New Orleans on a “homosexual parade” that was supposed to have been held the next week.

Hagee not only made the connection, but affirmed it multiple times as everyone from NPR’s Terry Gross to right-wing radio host Dennis Hastert asked if he was serious.

“I believe that New Orleans had a level of sin that was offensive to God, and they were recipients of the judgment of God for that,” Hagee told Gross. “The newspaper carried the story in our local area that was not carried nationally that there was to be a homosexual parade there on the Monday that the Katrina came. And the promise of that parade was that it was going to reach a level of sexuality never demonstrated before in any of the other Gay Pride parades. So I believe…that the Hurricane Katrina was, in fact, the judgment of God against the city of New Orleans.”

Two years after that statement, Hagee endorsed then-GOP presidential nominee John McCain. The endorsement turned out to be problematic for McCain, who never could amend himself to Hagee’s slew of homophobic (as well as anti-Catholic and anti-whatever else) comments, especially during McCain’s trip to New Orleans.

Apparently God’s Sodom-and-Gomorrah-like punishment of New Orleans didn’t take, according to right-wing preacher and radio host John McTernan. When Hurricane Isaac (later downgraded to a tropical storm) made aim for New Orleans in 2012, McTernan likened the seven-year gap to the seven days of creation, and said God was revisiting his judgment.

“The church, city and nation have not repented and the homosexual agenda is far worse than it was in 2005,” he said. “New Orleans is still hosting Southern Decadence with open homosexuality manifesting in the streets of the city. It could be that God is putting an end to this city and its wickedness.”

McTernan wasn’t done. When Hurricane Sandy struck later that fall, he blamed President Barack Obama’s endorsement of gay marriage for angering God. “Both candidates are pro-homosexual and are behind the homosexual agenda,” McTernan said (and he really believed Romney was “pro-homosexual”). “America is under political judgment and the church does not know it!”

Blaming Hurricane Sandy on gays and lesbians turned out to be a popular response. What did the eastern seaboard do to deserve such wrath? According to Pastor Luke Robertson, its collusion in advancing gay marriage, best embodied by then-New York City Mayor Michael Bloomberg’s contribution to support gay marriage in Maryland.

“So here was the mayor of New York giving a quarter of a million dollars, coming down to Maryland discussing the matter,” Robertson said. “While he's here somebody whispers in the ear, you better go back home and protect your stock because God is sending judgment. The thing came through the area. You have to understand the season and the time. It's almost the end of hurricane season, but God sent one of the biggest hurricanes ever.”

Meanwhile, declaring that lower Manhattan was “one of the national centers of homosexuality,” Rabbi Noson Leiter of Torah Jews for Decency showed how far back the idea of blaming gays for natural disasters went.

“The Great Flood in the time of Noah was triggered by the recognition of same-gender marriages,” he said. “The Lord will not bring another flood to destroy the entire world but He could punish particular areas with a flood, and if we look at the same-gender marriage recognition movement that’s occurring, that certainly is a message for us to learn. We have to learn that the Lord does watch what we do and if we don’t shape up He will deliver divine justice.”

How’d that divine justice delivery go? “So far it looks like any cancellations to events over the next few days are just going to give us more time for partying,” Tris Reid-Smith, the editor of Gay Star News said at the time. “If God is trying to punish the gays, he sure doesn't know how to do it.”