Believe me, the right's approach would be much worse. But the underinsured are getting a worse deal than you think 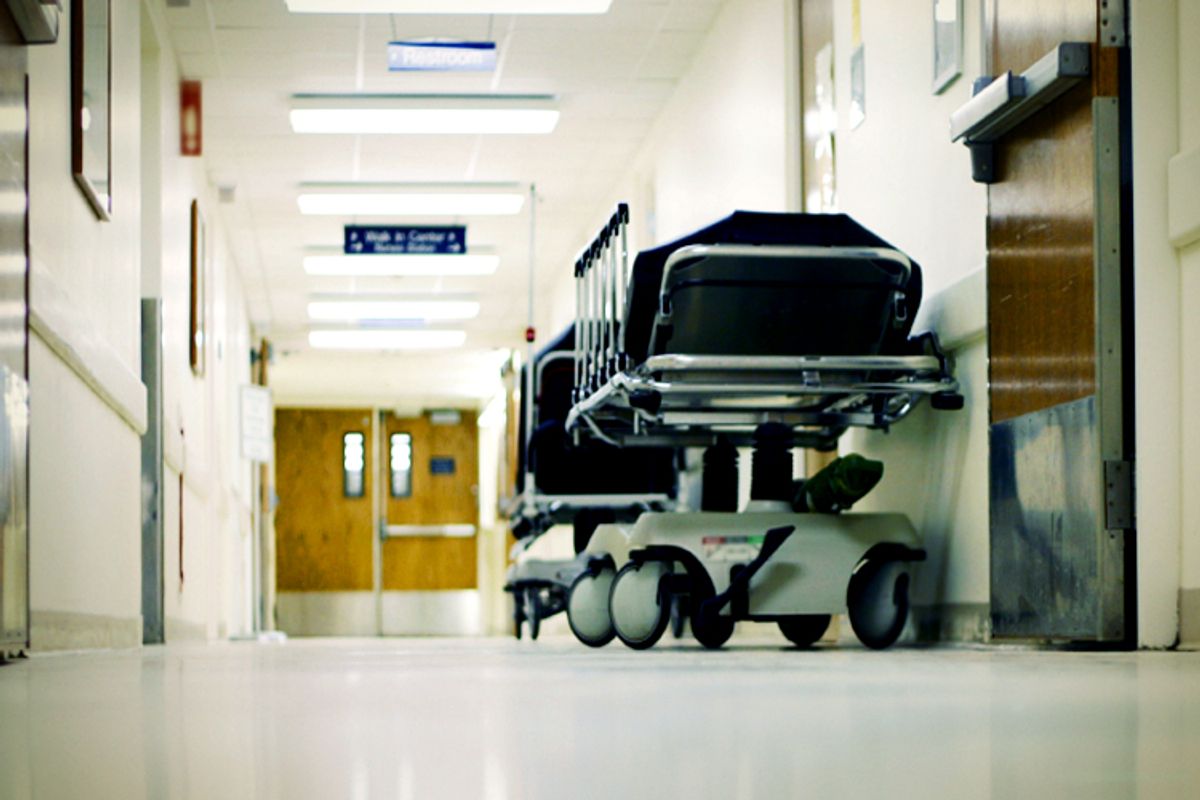 As a single-payer advocate who is also a doctor, I was concerned after the Affordable Care Act was passed that it didn’t do enough to combat rising underinsurance. A recent study by the Commonwealth Fund, which used new data to demonstrate that in 2012 some 31.7 million Americans were underinsured (i.e. insured, but still with heavy additional out-of-pocket health care expenses), argued that the burden of underinsurance will likely lessen as the ACA fully unfolds. But is there really reason for such optimism?

This is a complicated issue with many moving parts, so one way to tackle it (before immersing ourselves in the exhilarating policy literature) is to pose a simpler question: if your family is insured, and someone gets seriously sick, can you not worry about going broke?

The short answer: it depends on how much you have in the bank, and on the “out-of-pocket maximum” established by the ACA for your particular plan. The out-of-pocket maximum is the most that you would have to pay (after premiums) on things like co-pays for medications or deductibles for hospitalizations, and it can go as high as $12,700 annually for exchange plans under the ACA. But doesn’t the law provide protection for lower-income individuals, for instance, in the form of reduced out-of-pocket limits? The answer is yes – but to a lesser extent than we initially thought, even though, somehow, no one informed us that things had changed.

After it passed, my concerns about underinsurance re: the ACA revolved around codifying cost sharing measures, like large deductibles and copays, into law. But the out-of-pocket maximums that the law created were admittedly better than nothing, and – as important – were based on income. According to the text of the law, once your family income goes below 400% of the federal poverty level (which for those enrolling now would be less than $94,200 for a family of four) the maximum out-of-pocket limit (now $12,700) would be progressively reduced by either one-third, one-half, or two-thirds, giving (roughly) the following figures for 2014: In other words, if you make less money, you have less liability for medical expenses. Putting aside the question of whether any out-of-pocket liability is a good idea (I think not), this makes sense. But, though the two-thirds/one-half/one-third limit reductions were written into law, they no longer hold.

In what seems to have gone essentially if not entirely unreported, a densely written rule issued by the Department of Health and Human Services in March 2013 eliminated the reduced out-of-pocket maximum for those making above 250% of the federal poverty level. Additionally, for those making between 200 - 250% of poverty, the limit was raised from one-half to four-fifths of the $12,700 maximum (i.e. $6,350 to $10,160). These limits were then rounded up a bit more to account for “any potential inaccuracies” in estimates, to give us today’s actual limits:

To summarize: everyone who makes between 200% and 400% of the federal poverty level (i.e. a good portion of the middle class) quietly had their Obamacare out-of-pocket liability raised substantially: for a family of four with an income of $60,000, it suddenly doubled to $12,700.

Now first, was this major change legal? Unfortunately yes, as the ACA contained a clause giving the administration the power to adjust the law’s reduced out-of-pocket maximums upwards, if (bear with me on this) the original limits would cause the “respective actuarial values to exceed the values” specified by the law. In other words, if it seemed that the original limits in the law would result in insurance companies footing too big a piece of the health care bill (i.e. more than 70% for a silver plan), the Secretary would – Voile! – raise the out-of-pocket limit. Otherwise, insurance companies would compensate by further increasing copays and deductibles, so as to bring their share of your health care bill back down to 70%.

Remarkably, although there was some uproar after it was reported last year that another buried rule change would allow insurers to not count (for one year) pharmaceutical costs towards the out-of-pocket limit, there has been, as far as I’ve been able to find, nothing in the media on this more important change (which is set to continue in subsequent years).

So what does this mean for an average family? Let’s take two adults in their 40s, who have two kids and a gross income of $50,000 and who buy a plan on the exchange. Based on US averages, after subsidies, the family would pay $3,365 annually for the premium of a “silver plan,” which might sound reasonable. That plan, however, would cover (on average, and even with additional subsidies) only 73% of their health care expenses. If someone needed health care, copays, deductibles and co-insurance could cost them an additional $10,400 every year. And if they made the mistake of (intentionally or not) going outside the narrow “high-value” network of doctors and hospitals that most of these plans provide, there would be no limit (or, generally speaking, coverage) at all.

Between stagnating wages, soaring prices for higher education, and (in many areas) unaffordable housing, we can safely assume that such families will be severely squeezed by sickness. It would be very hard to blame them for skipping appointments, missing pills, or even avoiding the Emergency Room when a worrisome symptom developed.  If that’s not underinsurance, what is?

I’m certainly not advocating going backwards, and the conservative “solution” would clearly only makes things much worse. As the Commonwealth Fund study emphasized, the expansion of Medicaid will, in particular, provide crucial assistance for millions. And the pre-ACA individual insurance market was by all accounts ugly, with no guarantee that you could even buy into it. “My deductible is nearly $3,000, which is ridiculously high, in my opinion,” one woman remarked to The New York Times. “But as someone with pre-existing conditions, I’m grateful to be able to buy insurance at all.”

It’s clearly good news that she’s now covered. But should such an individual have to be grateful to buy insurance that makes her spend thousands every time she needs to use it, just for the crime of being sick?