Chris Hayes, pro athletes and “being a man”: Our demented masculinity debate 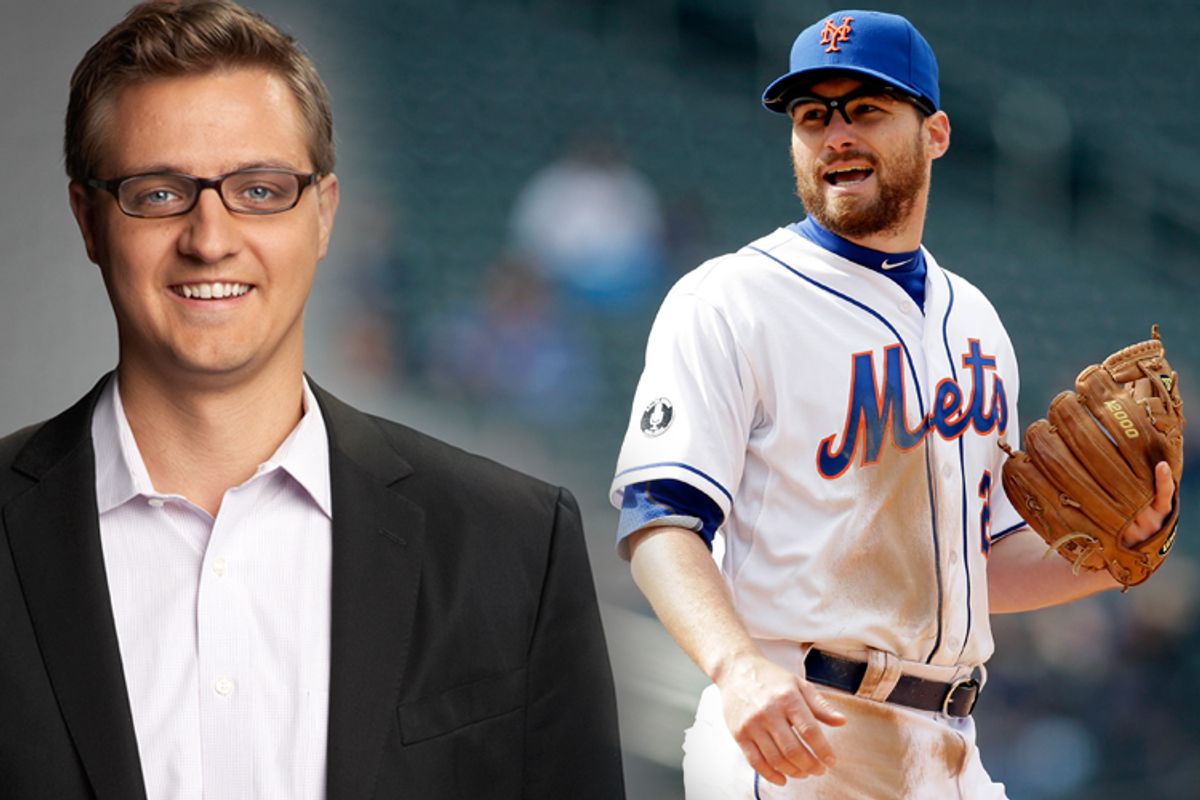 When New York Mets second baseman Daniel Murphy decided to take paternity leave earlier this month to welcome his child into the world, he probably didn’t expect the firestorm of commentary his decision would provoke. That’s fair enough, because putting one’s family before one’s professional obligations is likely the most benign, reasonable decision a person could possibly make. But that didn’t stop sports commentator Mike Francesca from blasting Murphy on his sports radio show, claiming that Murphy should’ve hired a nurse and that, on the whole, paternity leave is a “scam.” (Francesca’s sentiments were shortly echoed by retired football player Boomer Esiason, who proposed the Murphy family should’ve scheduled an elective pre-season C-section rather than opt for paternity leave.)

MSNBC’s Chris Hayes called in to his own show – from which he is currently taking leave to be with his wife and newborn son – to condemn Francesca’s “Neanderthalish” comments on paternity leave, noting that taking time off to be with one’s wife and child following a birth is “part of being a man.” Hayes wasn’t alone in identifying old-fashioned notions of gender as key in the paternity leave debate; at the Nation, Dave Zirin chalked up the suspicion and excoriation of leave for dads to a culture of toxic masculinity.

Hayes and Zirin seem to have appreciated something that should be flatly obvious, yet nonetheless escaped Francesca and Esiason: There’s nothing unmasculine or poorly calculated about fathers taking time off to be with children. That Hayes and Zirin see a poisonous definition of masculinity and insecurity in identity at the root of the strange sports-based hatred of paternity leave seems ancillary to a much larger socio-political problem: one that has less to do with gender and more to do with life itself.

As often as proponents and opponents of particular practices related to childbearing – namely contraception and abortion – accuse one another of propagating a culture of death versus a culture of life, little time is actually spent fleshing out what a “culture of life” would rightly look like. Leave arguments about abortion and contraception aside, and we can likely all agree that a culture of life would recognize and promote the importance of family in welcoming children into the world. After all, a culture that promotes childbirth without insisting upon the equally significant issue of childcare is steeped in half-baked pro-natalism rather than pro-life philosophy.

And on that count, American culture is decidedly anti-life. A recent comparison produced by the Pew Research Center shows that, out of 38 countries ranging from Estonia to Sweden to South Korea, the United States lags last in government-supported parental leave, with zero weeks of paid parental leave supported by the state and only 12 “protected.” Twenty-five of the 38 countries listed also offer paternity leave specifically, with Norway, Ireland, Sweden and Germany all offering eight weeks of supported leave or more for new dads. Here again, the United States comes in last.

And yet, there still isn’t a very loud lobby for supported paternity leave in the United States. This is likely partially due to the half of our political contingent that hates state-supported anything, but also likely related to the “barriers” one United Kingdom study found when investigating the reasons men who have paid paternity leave available to them don’t take it: namely, cultures that don’t recognize the profound significance of family. If everyone at work views fatherhood as trivial and emasculating compared to the station of work, then naturally fathers will demur from taking time off to spend with new moms and babies.

This is anti-life culture at work. Human beings, being by our nature profoundly social, need one another to grow and thrive. This is especially true of new infants, who depend entirely on others for the necessities of life.

Critics of paternity leave like Esiason, who argue that paternity leave is worse for children in the long run because it worsens either the father’s pay or career prospects, should be most in favor of state-sponsored paternity leave, as legal protections can solve both of those problems. In other words, if a father taking time off to spend time with the mother of his child and the new baby is damaging, it’s only because we’ve agreed as a culture that fatherhood is something that isn’t worth protecting legally or economically. That’s a sign of a sick, anti-life culture on its own, but factor in folks like Francesca, who suggested the Murphy family should have simply hired a nurse, and you have a society that believes family is basically interchangeable with anything else: mothers for nurses, fathers for their paychecks.

But the reality is that there is no substitute for family. The relationship between mother and father is just as essential to parenting as the relationship between each parent and the child, and parental leave – that is, maternity and paternity leave coupled together – should be as much about guaranteeing families the opportunity to bond as whole units as about guaranteeing each parent the opportunity to care for needy newborns.

The obnoxious criticism aimed at paternity leave signals a culture that has the whole order of things turned around: families aren’t here to serve jobs; jobs are here to serve families. If we want a real, robust, consistent culture of life to raise our families in, it will be founded on the radical proposition that family is to be a paramount social concern, with support underwritten by the state and engraved into the culture. The mealy-mouthed masculinism that chastised Murphy for making a decision in that spirit is just one more barrier to break through on the way to an authentic culture of life.