Modern men aren't allowed the narcissism of "Mad Men" -- but Don Draper's not exactly a '60s guy, either 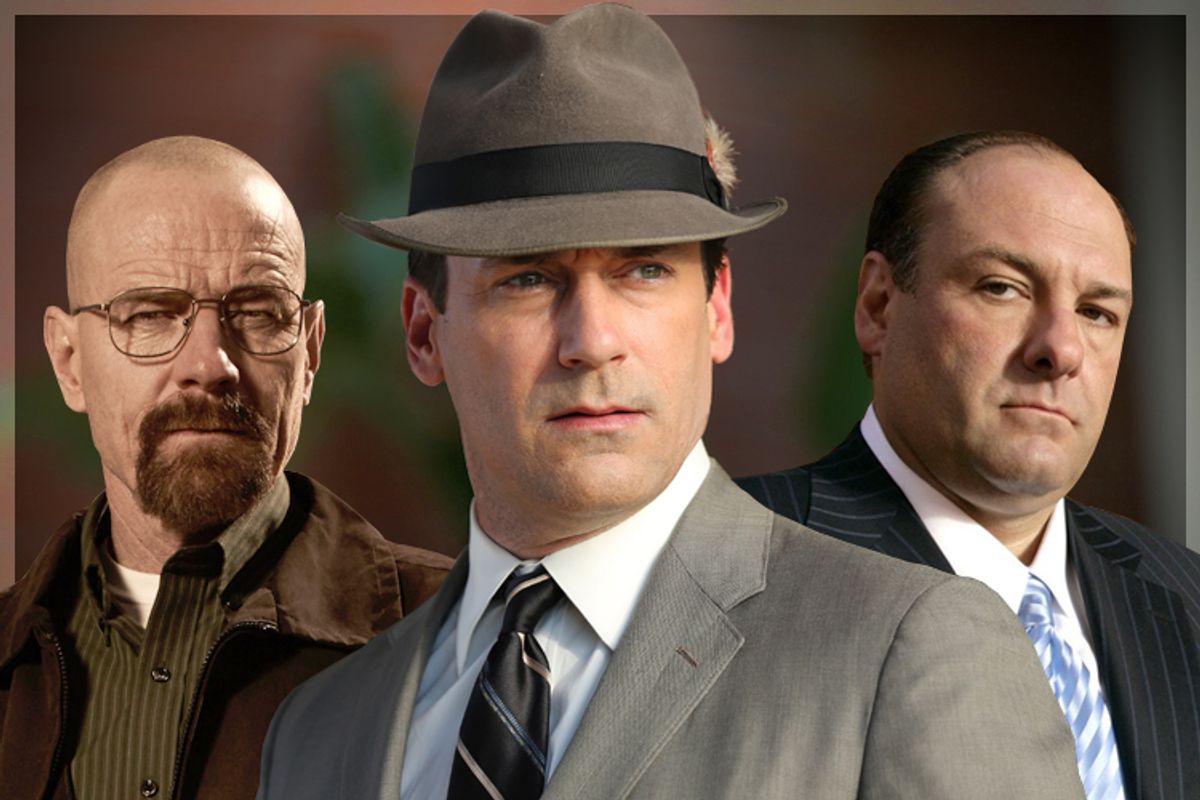 “But what about 'Mad Men'?” I’ve been asked this question more times than I can count in the last seven years. It comes up any time I mention working on my book, "Cable Guys: Television and Masculinities in the 21st Century," which examines many of the cable dramas that can be found on television schedules alongside "Mad Men," but excludes Don Draper and crew. "Mad Men" may be a 21st century television show, but Don Draper is not a 21st century man, and the changes in how men are valued are brought into stark relief when considering Don in comparison with his 21st century contemporaries.

"Mad Men’s" 2007 debut places it chronologically in the middle of the trend of male-centered serials — a subgenre notable for serially structured storytelling that explores the whole life of its male protagonists. "The Sopranos" arguably initiates the form in 1997, and a succession of series including "The Shield" (2002), "Nip/Tuck" (2003), "Rescue Me" (2004), "Californication" (2004), "Dexter" (2006), "Sons of Anarchy" (2008),"Hung" (2009), "Breaking Bad" (2008) and "Justified" (2010) follow as noteworthy examples. The absence of shows that attend to both the home and work lives of male protagonists prior to "The Sopranos" and the speed by which the male-centered serial became an identifiable subgenre are astounding. Though men have always been prevalent on television and commonly characterized to have both professional and domestic roles, very few series explored stories in both spheres with near equivalent depth until the early 2000s.

Many have described these as shows as about “antiheroes” to acknowledge how the shows’ protagonists are not the unequivocal heroes common among television protagonists past. But these characters and the struggles the series depict are most interesting for the aspects of male identity that are revealed as heroic, and this is where Don Draper is clearly a man of another century. Where Don grapples with how to be Don Draper, 21st century protagonists such as Walter White, Jax Teller and Ray Drecker are fundamentally unsure about how to be men.

Modern men aren’t afforded nearly the narcissism allowed “mad men.” Don is largely indifferent to the loss of his family following his divorce from Betty, and is motivated by the ego affirmation achieved professionally. The journey of the series may be Don’s quest to fit the man he thinks himself to be into the circumstances he finds himself within, but this sense of misplacement comes from his disavowal of his own past and his choice to claim another’s identity. His crisis is not a struggle with the masculinity generally affirmed by '60s culture.

In contrast, the narrative journeys of protagonists set in the 21st century depict men struggling most desperately to restore or maintain families. A central component of their identities is the importance they place on being a good father, though this is shown as challenging and is achieved with limited success. Far from kings of their kingdoms, these men are fallible and make missteps.

Even outside the male-centered serials, contemporary television is rife with men embodying masculinities very different than those who have come before. Changes in norms of masculinity first became apparent with the “new men” of the 1980s. But these men — consider the cast of "thirtysomething" as an indication — were arguably how we might imagine men changed by feminism to be. But with little fanfare, television men changed a lot in the following decades, so that equitable, companionate marriages now predominate across broadcast and cable, drama and comedy. NBC’s family drama "Parenthood" features three generations of men struggling to figure out and become the men they are expected to be, while ABC’s "Last Man Standing" features Tim Allen reinventing his role as a family man 20 years after the debut of "Home Improvement."  The role may return Allen as a patriarch, but he is not easily categorized as patriarchal. As Mike Baxter, he is openly ideologically conservative, and yet can be argued feminist in many respects.

Though "Mad Men," "Breaking Bad" and "The Sopranos" have garnered extensive press attention and devoted — if demographically narrow — fan bases, none of these series nor their contemporaries have been considered as evidence of changing gender scripts in the way shows such as "The Mary Tyler Moore Show," "Murphy Brown," "Ally McBeal," "Sex and the City" and "Girls" have drawn discussion and dissection as emblematic of the zeitgeist of female identity. What would it take to see, really see, men, as men, on television? Does it matter that stories full of men embodying worlds changed by feminism can be found across scripted television (though reality TV largely remains a vestige of a previous era)? How is it that the conventions of masculinity and male identity could have changed so much without accompanying discussion of these challenges, or even a significant panic?

From the fashion, to the politics, to the men themselves, there is no doubt "Mad Men" provides a glimpse of the '60s. But one of its greatest contributions is to make clear just how much what it means to be a man has changed.