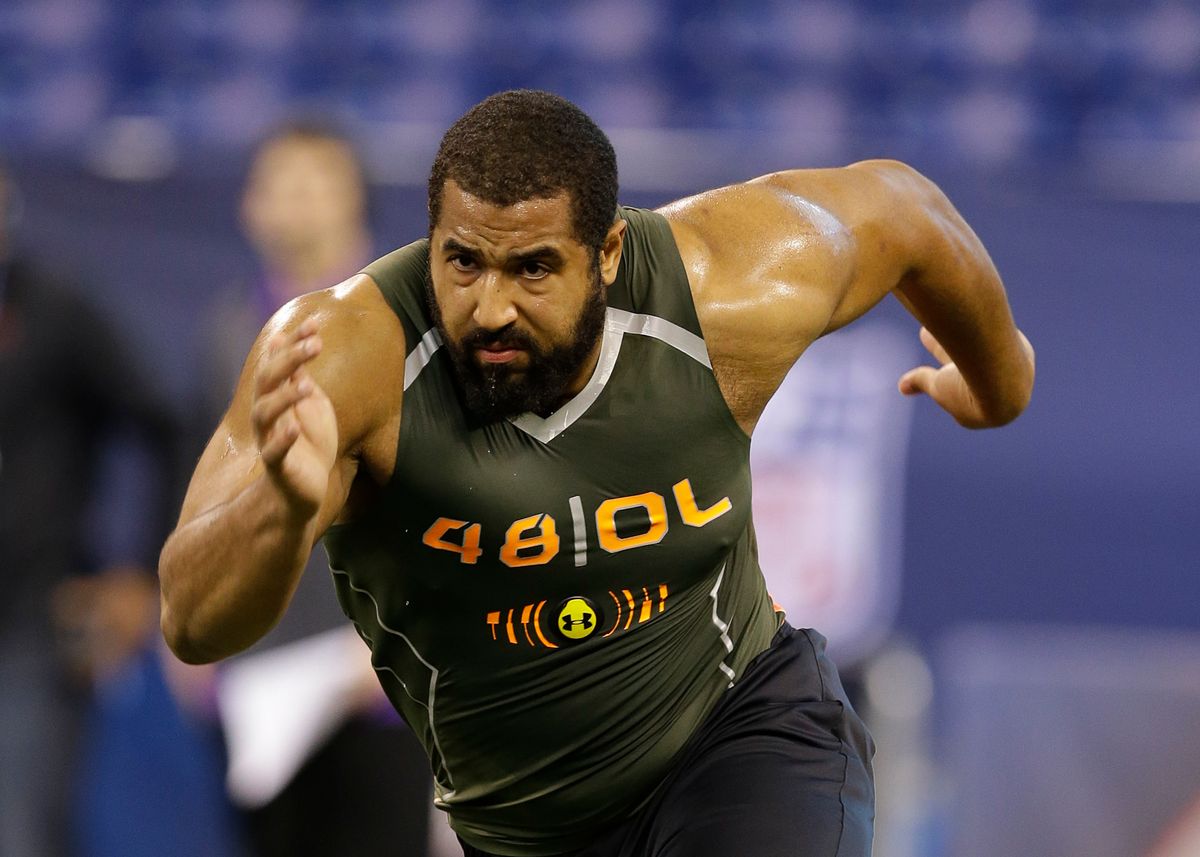 FILE - In this Feb. 22, 2014 file photo, Penn State offensive lineman John Urschel runs a drill at the NFL football scouting combine in Indianapolis. Urschel will routinely provide a look at his journey leading to the NFL draft on May 8 in a series of diary entries. (AP Photo/Michael Conroy, File) (AP)
--

STATE COLLEGE, Pa. (AP) — Penn State offensive lineman John Urschel will routinely provide a look at his journey leading to the NFL draft on May 8 in a series of diary entries. The all-Big Ten, third-team AP All-American has a Master's degree in math and was awarded the William V. Campbell Trophy as college football's top scholar-athlete. The 6-foot-3, 315-pound guard's fifth entry looks at how pro day went in State College on Tuesday.

I felt very little pressure at pro day, having already put up very good numbers across the board at the combine. My fellow Penn Staters at the combine, defensive tackle DaQuan Jones and receiver Allen Robinson, chose some events to improve on, while also sitting out others. I chose to sit on my numbers for every event, save the 40-yard dash. And this decision was not without mockery from the scouts.

Were the scouts unhappy with me for not doing more events? Quite the opposite. Nearly every scout I spoke with was puzzled as to why I would want to rerun my 40. My time of 5.3 seconds is perfectly fine, and I had a fast 10-yard split (which is valued even more for offensive linemen). Scout after scout proceeded to tell me they couldn't care less if I ran the 40 a tenth of a second faster — which I did, by the way.

One of the main concerns scouts had for me was whether or not I could play center, and snap the ball effectively. During my offensive line drills, I played center exclusively, performing both under-center snaps and shotgun snaps. By the end of the day, there was no doubt that I could not only play guard, but center as well.

However, my fellow seniors who did not receive an invite to the NFL combine had a much more hectic day. This is a tough position to be in. While I have had multiple opportunities to wow scouts — an all-star game, the NFL combine, my Penn State pro day, and private team workouts — these prospects have only one chance to show what they have got. Their performance at pro day can be the difference between getting picked up on a team for training camp and not even cracking a roster in the league. Ever.

To make matters even worse, we had one of the latest pro days in college football. Our pro day had been pushed back a month later to give one senior recovering from an injury a chance to perform. While I was a little less than pleased about the delay, I appreciated the care and concern that our coaching staff and team in general had for us. I'm not sure how often this type of thing occurs at other programs, but something tells me we are some of the best-treated players in the country.

However, as fate would have it, the injured senior ended up not being able to work out at pro day after all, although I have no doubt he will get his shot to play in the NFL as well.

While a late pro day could seem like a positive for all parties involved, it is quite the opposite. The late pro day lengthens the amount of time we have to spend on combine drills, and shortens the amount of time we get to prepare for being in football shape. In addition, for the players that did not go to the combine, they had far too much time between the season and their pro day. Could you imagine the pressure that would go along with training for four full months for one pro day? Typical training regimen involving the NFL combine/pro day is an eight-week lifting/running schedule meant to leave the athlete peaking at the end of the period. The seniors we had that did not attend the combine ended up going through this peaking process twice.

Despite all of the above, my fellow seniors rose to this challenge. Most notable among the group, linebacker Glenn Carson had an extremely strong day, putting up 30 reps of 225 in the bench press test and running a 4.7 40 on the field. He did not let his absence at the combine hold him back from having a chance to be drafted, and, more importantly, play in the NFL. As one of his best friends, I couldn't be prouder of him.

Between now and the draft I will have workouts with private teams, but for the most part all that is left is to wait for draft day, and do everything that I can between now and then to ensure that I am ready to contribute to whatever team decides to call my name on draft day.