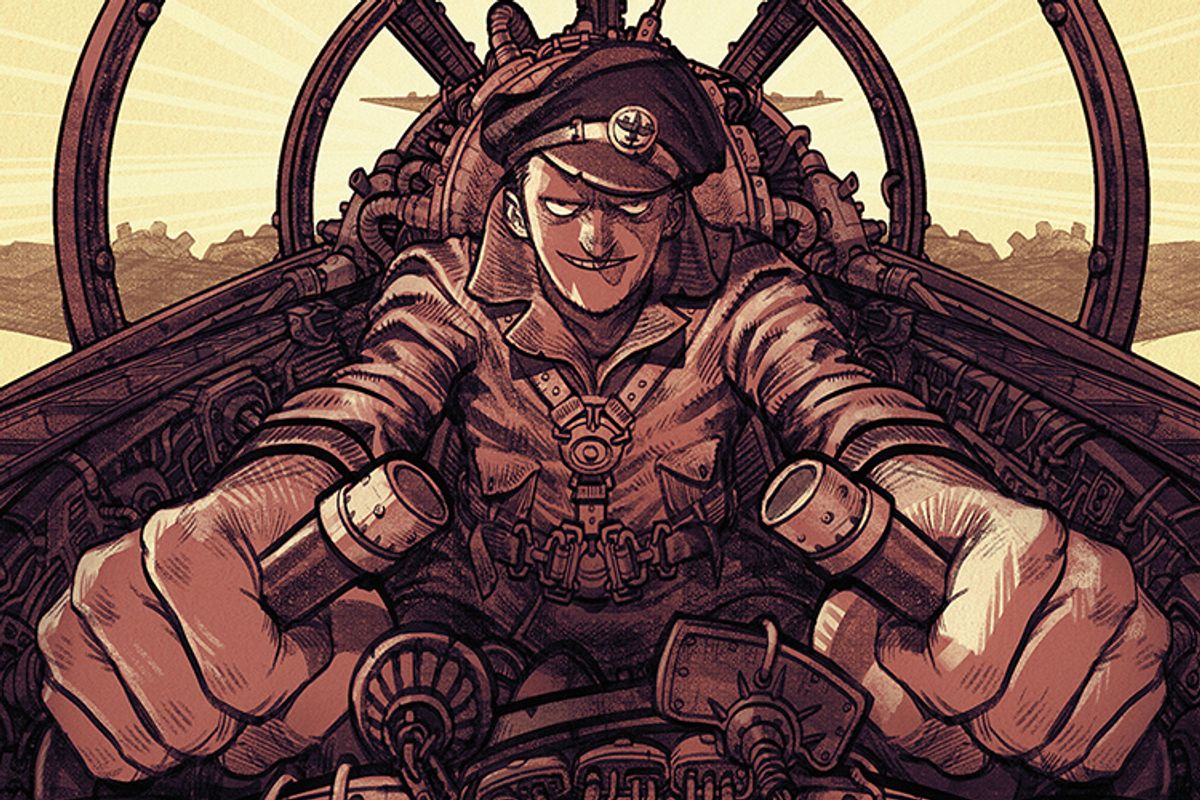 At first blush, “Luftrausers” is as innocuous a video game as you could ask for. It’s a cute, two-dimensional, arcade-type game in which the player flies around in a little airplane and shoots at things in order to rack up points. But it also happens to feature pilot art inspired by period Luftwaffe uniforms and a title image that evokes the Totenkopf skull and bones of the SS.

Shortly after “Luftrausers” was released, a prominent artist took to Twitter to ask whether playing the role of a Nazi fighter pilot was supposed to be funny. Rob Dubbin, a videogame maker and writer for "The Colbert Report," tweeted, “As a Jew, what offends me is the aesthetic. As a game designer, what offends me is the absence of critical distance from it.” Rami Ismail, one half of the Dutch game studio Vlambeer, which developed “Luftrausers,” took to the company blog to acknowledge the complaint, apologize for any discomfort caused and respectfully disagree that the game was about a Nazi pilot.

I briefly spoke with Ismail about this. I felt the skull and crossbones iconography was obviously problematic. Ismail, to his credit, agreed. He and his co-creator had hardly registered that it was offensive, he explained, after working on the game for so long.

Nazism has a history in video games, but it has been scrubbed from most games released on home consoles over the past few decades. “Bionic Commando” was released for the Nintendo Entertainment System in 1988. The game was released in Japan as “Hitler’s Revival: Top Secret.” References to Nazism and Nazi iconography were removed from the game for the American market. Swastikas were replaced with eagle symbols (a half-assed replacement considering an eagle sits atop the emblem of the Nazi Party), and the finale involves what is obviously a cryogenically-revived Adolf Hitler, who the American version identifies as “Master-D.” But the 14-year-old me who saw Hitler’s face explode in the finale knew precisely what he was looking at, which is why the ending of “Bionic Commando” is one of my most vivid memories of playing video games as a kid. Everyone I knew who finished “Bionic Commando” talked about the end, where you killed Hitler.

The birth of the first-person shooter is often attributed to “Doom,” a science fiction game released in 1993 in which the player blasts their way out of demon-infested science research stations on Phobos and Deimos, the two moons of Mars. But from the release of “Wolfenstein 3D” in 1992 to “Call of Duty: World at War” in 2006, Nazis were the consummate enemy in video games. “Wolfenstein 3D” was inspired by “Castle Wolfenstein,” a stealth-based game with simple graphics in which the player had to escape a Nazi castle run by the SS. “Wolfenstein 3D,” on the other hand, was a bullet-fest with machine pistols, gatling guns and rocket launchers that set the player against Nazi brownshirts, SS stormtroopers, undead Nazi occult creations and finally the Fuehrer himself in an armored robot suit covered in chainguns.

So in light of the debate around “Luftrausers,” a cutesy 2D shooter game that only at best implies the inclusion of Nazis, maybe we should be looking more closely at the game “Wolfenstein: The New Order,” set to be released next month, which is festooned with straight-up Nazi iconography. “Wolfenstein: The New Order” takes place in 1960, in an alternate reality in which Germany won World War II and now occupies the United States. The Germans are depicted as technologically advanced conquerors, and cackling Nazi villains are teased as the game’s antagonists.

Pop culture on the whole has long had a tendency to reduce the Nazis to buffoons to be outwitted or manifestations of cartoonish evil to be destroyed, whether in the Indiana Jones movies or in Wolfenstein. But there’s a saying in the video game community: “Zombies are the new Nazis.” So maybe we just ought to stick to shooting zombies. Blowing the brains out of the undead is a lot less controversial.