A look at the NBA playoff picture 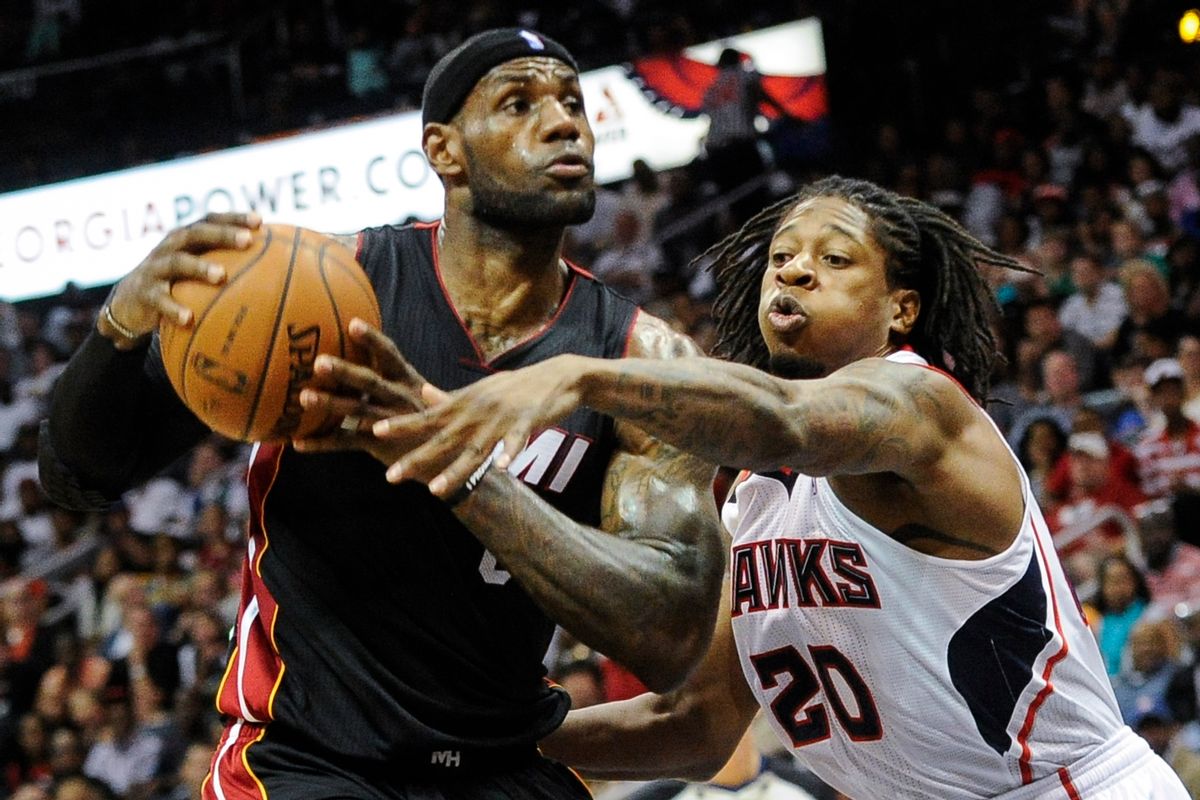 Miami Heat forward LeBron James, left, tries to keep the ball away from the defense of Atlanta Hawks forward Cartier Martin (20) during the second half of an NBA basketball game on Saturday, April 12, 2014, in Atlanta. Atlanta won 98-85. (AP Photo/John Amis) (AP)
--

A look at where things stand in the NBA playoff picture, with four days remaining in the regular season:

Another day, another change atop the Eastern Conference. Indiana has control again.

Atlanta not only played its way into the playoffs for the seventh straight year by beating Miami on Saturday night, but the Hawks knocked the Heat into the No. 2 spot in the East race.

The Heat and Indiana are tied at 54-26, but the Pacers hold the tiebreaker edge. If Indiana beats Oklahoma City and Orlando, the Pacers would have home-court through at least the first three playoff rounds.

Atlanta's win eliminated New York, so the East eight are known — but the order of finish is still very much in doubt.

Washington and Charlotte both won, so the Wizards remained No. 6 and the Bobcats stayed No. 7.

Dallas is in the playoffs, becoming the seventh Western team to clinch by beating Phoenix — a superb game with a frantic finish.

That leaves the Suns a half-game behind Memphis in the race for the last spot, and as schedule-maker luck would have it, Memphis visits Phoenix on Monday night.

Houston recovered from a 15-point hole to beat New Orleans. The Rockets stayed No. 4 in the West, adding a half-game to their cushion over Portland in the race there.

And the Los Angeles Clippers ensured they would finish with the West's third-best record after topping Sacramento.

Oklahoma City at Indiana: Reeling Pacers need a win to keep No. 1 in East, and perhaps for their own sanity as well. Thunder locked into No. 2 out West.

Toronto at Detroit: Raptors start day a game behind Chicago in race for No. 3 in East.

Orlando at Brooklyn: Nets have lost two straight and while they'll probably wind up 5th in East, this isn't the time for a slide.

Golden State at Portland: Trail Blazers trying to keep hope for No. 4 alive. Warriors don't want to slip out of No. 6.

Memphis at L.A. Lakers: Grizzlies must, must, must avoid temptation to look ahead to showdown at Phoenix on Monday.

NOTE OF THE DAY

The 2014 playoffs will be the first in NBA history without the Lakers, Celtics and Knicks.

QUOTE OF THE DAY

"These are ultimate games. You work all year for opportunities to play in games like this." — Mavericks coach Rick Carlisle.