Created as a mascot for a musical software company, Miku has leapt to fame as a musical icon. Here's how 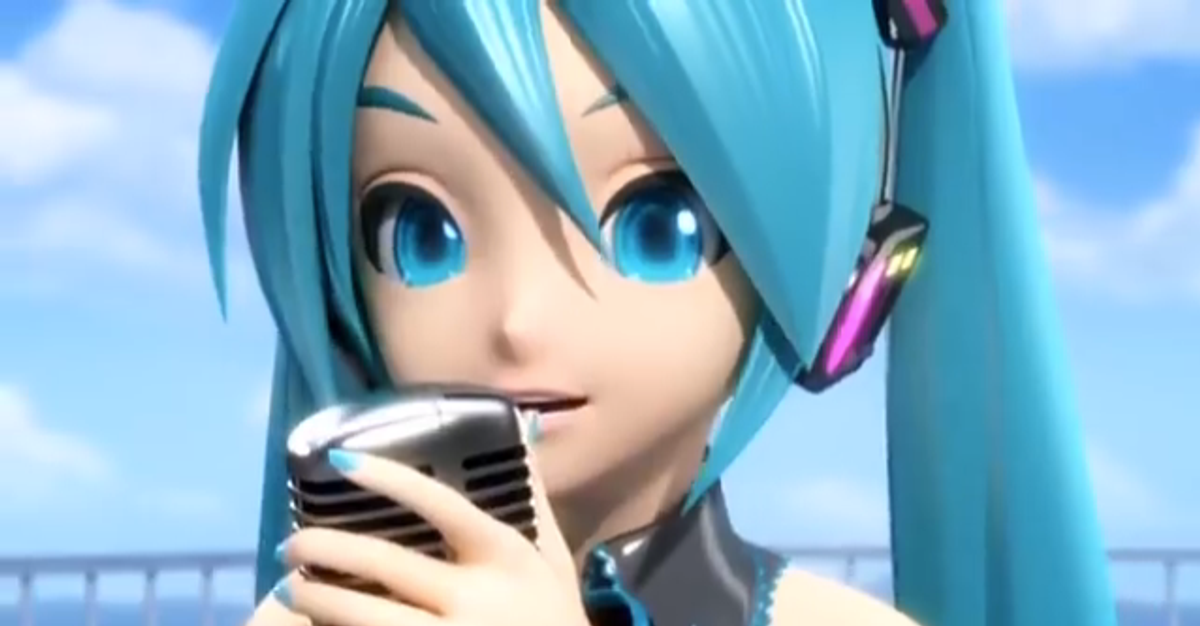 Even by the standards of pop stars, Hatsune Miku is eccentric and protean, her mystique elusive.

Her eyes are too round and blue to be real. She can be buxom or boyish, and almost painfully sultry — all in a droid-ish, understated way.

She dons a school uniform, with thigh-high power boots and a flared ultra-micro miniskirt. Her pig-tailed turquoise hair is so long that she risks tripping over it as she dances lithely in front of her adoring, sell-out crowds. In a saccharine soprano — reminiscent of a castrated Mouseketeer — her lyrics soar over the roars and ovations of glowstick-wielding teenage audiences.

Her fans wouldn’t have it any other way.

Hatsune Miku is big. Really big. Right now, she's Japan’s favorite pop star, according to Japan Today. She has more than 100,000 original (crowdsourced) songs, 1.8 million Facebook followers, and has even been the face for Google, Toyota, and Louis Vuitton, the paper reports.

The singer— a 16-year-old Virgo, measuring 5 foot 2 inches and weighing a paltry 93 pounds — looks as though she came straight out of a Saturday morning cartoon.

And yet she never fails to elude the paparazzi.

There’s a good reason for that.

Rather, “she” consists of a digitally synthesized voice connected to a hologram, an ever-evolving, crowd-sourced humanoid that performs all over Japan and, more recently, at sold-out concerts around the world.

Created in 2007 as the marketing mascot for a musical software company, Miku quickly leapt to fame as one of Japan’s most popular idols. Backing her up is a band of human musicians — real, sweaty, flesh-and-blood men playing guitar, bass, keyboards and drums. Although as with any diva worth her salt, the boys remain at least 20 feet from stardom, fading into the darkness as Miku steals the show. She is, of course, what the fans come to see.

All this raises the question, why worship a she-bot?

Of course, there’s more than a little that’s fake about pretty much any pop star. But is this the Next Big Thing, throngs obsessing over a hologram? Why are kids these days focusing their passion on an inanimate illusion? What does she do for them that a real person can’t?

GlobalPost investigated. Or we tried, at least.

In fact, our usual pool of trusty experts weren’t all that enthusiastic about using Miku as a lens on the Japanese Zeitgeist.

But we did find some interesting stuff.

Oddly enough, the rise of Miku could be the extension of a long-standing thing in Japan: an affinity for humanizing objects and technologies as if they were partners in life. That, according to Morinosuke Kawaguchi, a leading futurist and designer.

Some Japanese men, known as "otaku" or obsessive anime lovers, have even married their non-human girlfriends, which are really just body-pillowcases that depict fictional cartoon characters.

In fact, argues Kawaguchi, his compatriots’ predilection for endowing non-humans with souls isn’t even new. Its roots go back centuries, he says. “The Japanese have always believed in animism and Shintoism,” he said, referring to the island nation’s indigenous religion. “They see a spirit in objects like wood and stone.”

Automated wooden puppets called Karakuri Ningyo, built more than 400 years ago, mesmerized the nation with their life-like movements, he said. The figurines were inspired by mechanical clockwork technology from Europe. Still a nostalgia gadget today, they emit subtle emotions and can even write a handful of Chinese characters.

Today, Japanese girls continue to decorate their mobile phones and computers like dolls, treating electronic devices as companions in life. “The Japanese feel sympathy for even a computer,” Kawaguchi said. “It becomes a partner.”

Not everyone agrees, however, that the affection for non-humans reveals something about Japanese culture on the whole. “Is there something going on in American culture because they made the Terminator films? Or I, Robot? What about C-3PO and R2-D2 in Star Wars? Data in Star Trek?” asked Griseldis Kirsch, a Japanese pop culture specialist at London’s School of Oriental and African Studies.

There is “a seemingly impenetrable language, our knowledge about Japanese robotics, a vibrant popular culture, a lot of stereotypes on Japanese 'uniqueness,’” she said, “and out comes a mix in which we tend to think that there must be 'something' when all there is that someone had a good idea and turned it into money.”

And, of course, Miku’s handlers can probably sleep well at night without worrying that she’ll go on a vandalism rampage or drive after smoking pot, with an expired license.