Meet the spiritual forefather of conservatives' War on Women

Charles Keating was best known for his shady financial dealings, but his politics were even more destructive 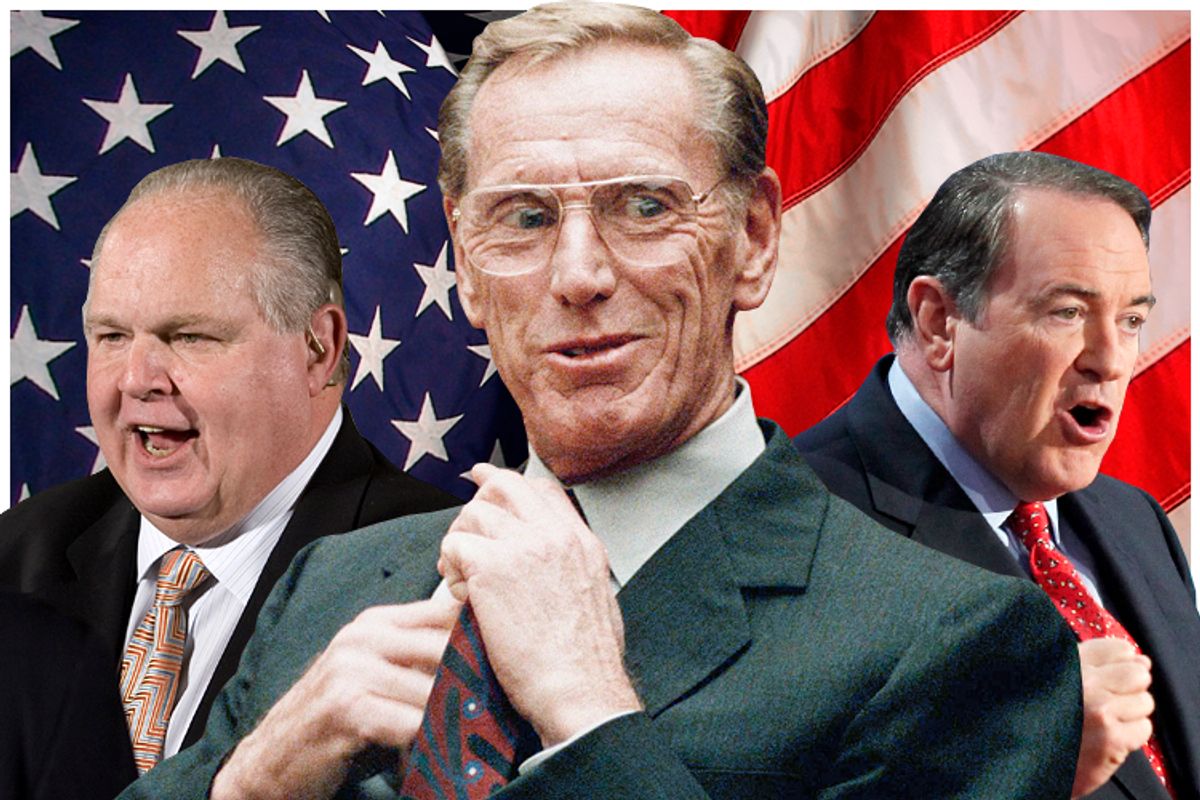 The late Charles Keating, who died last week at the age of 90, is remembered primarily for his role in the savings-and-loan crisis of the 1980s, as a symbol of the frauds and excesses of an unregulated financial sector -- a debacle from which we seem to have learned very little. Yet, ironically, those of us interested in American sexual politics remember a very different side of Keating: the smut-fighting moral entrepreneur who called for more regulation — as long as it pertained to matters of obscenity, rather than investment.

Keating’s pioneering activity in junk-bond innovation has all but eclipsed what may, in fact, be his most lasting legacy. As founder and longtime leader of Citizens for Decent Literature (CDL), Keating pioneered a new form of sexual conservatism, modernizing it to meet the changing mores of the mid-20th century. Through CDL, Keating developed a legalistic, pseudo-empirical anti-porn movement that worked hard to show itself as not anti-sex, but rather anti-perversion. As such, Keating brilliantly framed CDL for a post-Kinsey America, leaving a lasting imprint on conservative sexual politics.

A young Catholic lawyer in socially conservative Cincinnati in the 1950s, Keating watched with alarm as the newsstands and paperback racks of the nation filled with pulp novels and Playboy imitators, and he assessed the American moral landscape with a clarity few at the time possessed. Even as the Cold War witnessed a dramatic sexual retrenchment that ranged from aggressively domestic ideals for women to state-sponsored violence and suppression toward queer “deviants,” anti-smut activism seemed to be at low ebb. “Censorship” was unpopular, viewed through a Cold War prism as a tactic of the totalitarian Soviet Union, not freedom-loving Americans -- none less than President Dwight D. Eisenhower castigated “the book burners” in 1953. Meanwhile, old forms of moral activism had fallen into disrepute. Anti-smut activist Anthony Comstock, in whose name the 1873 federal obscenity law had been passed, was now viewed through a post-Freudian lens as a repressed Victorian, and Catholic cultural influence was on the wane, with the traditional boycott methods of the Legion of Decency under attack in the media and the Hollywood Production Code disintegrating rapidly.

Yet Keating uniquely recognized the opportunities afforded by the Supreme Court, whose 1957 Roth v. United States opinion determined that obscene materials were not protected by the First Amendment. Today we remember Roth for helping unleash the sexual revolution. Because Justice William Brennan restricted obscenity to only those works completely devoid of “socially redeeming value,” the case cleared the path for Henry Miller novels, "Lady Chatterley’s Lover," and ultimately "Deep Throat." But Keating recognized the conservative opportunity the Court afforded: Banning books could be framed as something other than censorship. If a sleazy book with a name like "Lust Agent" is obscene, it has no constitutional claim to free speech. Ipso facto, to suppress it is not to censor it.

Or at least, that's how Keating’s semantic gambit went — and it worked, marvelously. His CDL rapidly rose from a local Cincinnati group to a national behemoth, easily the nation’s preeminent anti-pornography organization in the 1960s and beyond. Keating stripped the movement against smut of its association with repression and prudery, instead boldly declaring that his cause could be reconciled with a sexually liberated age. “I spent over 8 years in the Navy,” his right-hand man declared in a typical 1962 CDL stock speech, “and I think sex is great!” The right kind of sex, of course: heterosexual and married, not “deviant.” Though himself Catholic, Keating kept CDL militantly broad-based to avoid the charge that it was an extension of sectarian Catholic beliefs. To the notion that moral offenses were victimless crimes, an idea promoted by Alfred Kinsey and others, Keating had an answer as well.

In CDL’s miraculously schlocky 1963 short propaganda film "Perversion for Profit," a barrage of statistics and social science is presented to link obscenity to venereal disease, homosexuality, juvenile delinquency, teen pregnancy and, ultimately, national decline. It plays like camp today, but reflected precisely the sentiments of national leaders like FBI head J. Edgar Hoover at the time. It also revealed another central CDL tactic: offering enough skin, sleaze and tawdriness to generate some real spectatorial frisson — all in the name of decency, of course.

The purported evidence of porn’s harms was mostly bunk. A few years later, Keating offhandedly explained the source of the film’s figures: They “came out of my head,” he shrugged. But the content mattered less than the form. What Keating accomplished through CDL was to wholly reinvent the battle against pornography, distancing it from censorship and the killjoys associated with it -- repressed Victorians with sweaty palms, insular Catholics attempting to impose their cultural politics, and baseless moralism. Scholars at the time saw conservatism as opposed to modernity itself, but CDL was as modern as they come, using sophisticated media tactics and always emphasizing data and law, not overt moralism. You wouldn’t confuse Keating for a character in "The Scarlet Letter."

Meanwhile, to view groups of naked women, undraped muscular men in physique magazines, scenes of bondage, or other such perversions in any other setting was a danger to self and nation; to take them in at a screening of "Perversion for Profit" or CDL’s other short agitprop films was legitimized through the alibi of educational value. “I repeat, ladies and gentlemen,” Keating declared in his stock speech, “that the purpose of showing these pictures… is not to shock you — it is to inform you.” That came after reading an extended passage from a pulp novel about how “taking a girl’s cherry is hell of a gratifying thing.” Such books, Keating warned, somewhat oddly, appealed not just to the lesbian and the homosexual, but even to the “cunalinguist.” Well, it sounded dirty, whether or not audiences understood it. At annual CDL conventions, the room with the smut on display — for purely informative purposes — was always well attended. Keeping the prurient interest of the material at hand always just below the surface, CDL always delivered the goods, in the purported interest of suppressing the very texts it sampled for its members.

That was Keating’s genius, and his new framework spread like wildfire; hundreds of local CDL chapters, a claimed 100,000 members, Keating’s appointment by Richard Nixon in 1969 to the President’s Commission on Obscenity and Pornography, and perhaps the group’s signature achievement, the reshaping of public sentiment toward Lyndon Johnson’s nomination of Abe Fortas as Chief Justice of the Supreme Court in 1968. While far-right groups and South Carolina Senator Strom Thurmond had gotten little traction with the public emphasizing Fortas’s liberalism, once CDL linked him to permissive obscenity decisions that resulted in the “floodtides of filth” opening across the nation, indignant letters poured into the White House. “Thurmond tastes blood now,” an aide wrote LBJ; soon the senator was screening CDL-supplied smut for reporters in the halls of the Senate. Fortas soon withdrew; his nomination was probably doomed from the start, but it was CDL that most effectively shaped public perception in the political battle.

Throughout this all, Keating carefully cultivated an image of CDL as driven by legal, empirical arguments, befitting the tenor of an era when scientifically minded experts calibrated everything from the national economy to individual psyches. There’s no central CDL archive, yet when I drove around the country as a graduate student, writing a dissertation on the politics of porn in which Keating played a central role and chasing his paper trail everywhere, it quickly became clear that the grassroots chapters were blatantly disregarding his tone of legalism and reason; in cities from Phoenix to Tulsa to Milwaukee, there were old-school Catholic boycott lists (explicitly disavowed by Keating), collusion between church leaders and police (ditto) and crusades against everything from Playboy to "Catcher in the Rye," all done in the name of CDL’s vaunted decency. Keating worked hard to keep this out of the national eye, again playing a smart game of showmanship by letting the grassroots chapters go wild while himself striking sane notes of moderation.

By the early 1970s, Keating had shifted his attention to the financial innovations that would make him rich (and later a criminal). Without his hands-on leadership, CDL floundered, changing its name to Citizens for Decency Through Law and finding itself superseded by media-savvy upstarts such as Morality in Media and the National Federation for Decency.

Even as CDL grew less active on the ground, though, it paved the way for future conservative mobilizations. A 1971 contract with direct-mail guru Richard Viguerie — who later helped build the entire interlinked New Right infrastructure of groups like the Moral Majority — is preserved in the papers of obscenity defense attorney Stanley Fleishman at UCLA, and reflects the shift from grassroots organizing to direct-mail fundraising. Indeed, Keating’s shift from opposing filth to filthy lucre was quickly reflected in CDL’s operating budget, almost 90 percent of which went into administration and further fundraising, rather than actual activism against smut.

By 1974, CDL had raised $3.5 million through Viguerie’s campaigns, but $2.9 million went back to Viguerie, and only $609,000 went into anti-porn activity. States from Pennsylvania to North Carolina to Florida began to deny the group permission to fundraise, and the attorney general of New York accused CDL of filing a “deceptive financial statement” to the state.  Most ominously, and linking CDL to Keating’s much-less-decent future financial activities, the Cincinnati press reported in 1974 that CDL had begun investing hundreds of thousands of dollars in American Financial Corp., the holding company of which Keating was vice president.

A few years later, Keating had moved to Arizona and begun the new set of corporate fronts that would culminate in the S&L scandals. He remained politically connected — Ronald Reagan even attempted to appoint him ambassador to the Bahamas in 1981, before the public was reminded that Keating had already been repeatedly investigated for suspicious financial activities — but allowed other leaders of the New Right to beat the morality drum in his place.

CDL itself casts a long shadow. Indeed, when George W. Bush sought to reinvigorate obscenity prosecutions in 2004, he relied on former CDL general counsel Bruce Taylor. More significantly, Keating’s tactics helped pave the way for a distinctly modern style of conservative activism, shorn of the backward-looking reputation that it had gained at midcentury by association with Charles Lindbergh and the Scopes trial. The groups that followed CDL, from Phyllis Schlafly’s STOP-ERA to Jerry Falwell’s Moral Majority and beyond, replayed everything from its structure to its endless fundraising fetish. Meanwhile, from the anti-gay movement’s insistent use of ostensible (if laughable) social-science data rather than outright homophobia, to climate-change deniers careful to frame their arguments in the language of science even as they reject overwhelming scientific consensus, today’s conservatives are his descendants. Even those railing against the present do not want to be seen as part of the past.

Though overshadowed by criminal misdeeds, Keating’s role in reshaping conservative tactics and rhetoric made a real contribution to history. Even as we remember him for his pioneering work in junk-bond scams, the imprint he left in modernizing conservatism may be his most lasting legacy.

Whitney Strub is assistant professor of history at Rutgers University-Newark and author of the books "Perversion for Profit: The Politics of Pornography and the Rise of the New Right" and "Obscenity Rules: Roth v. United States and the Long Struggle over Sexual Expression."