Sears is dying: What the ubiquitous store’s death says about America 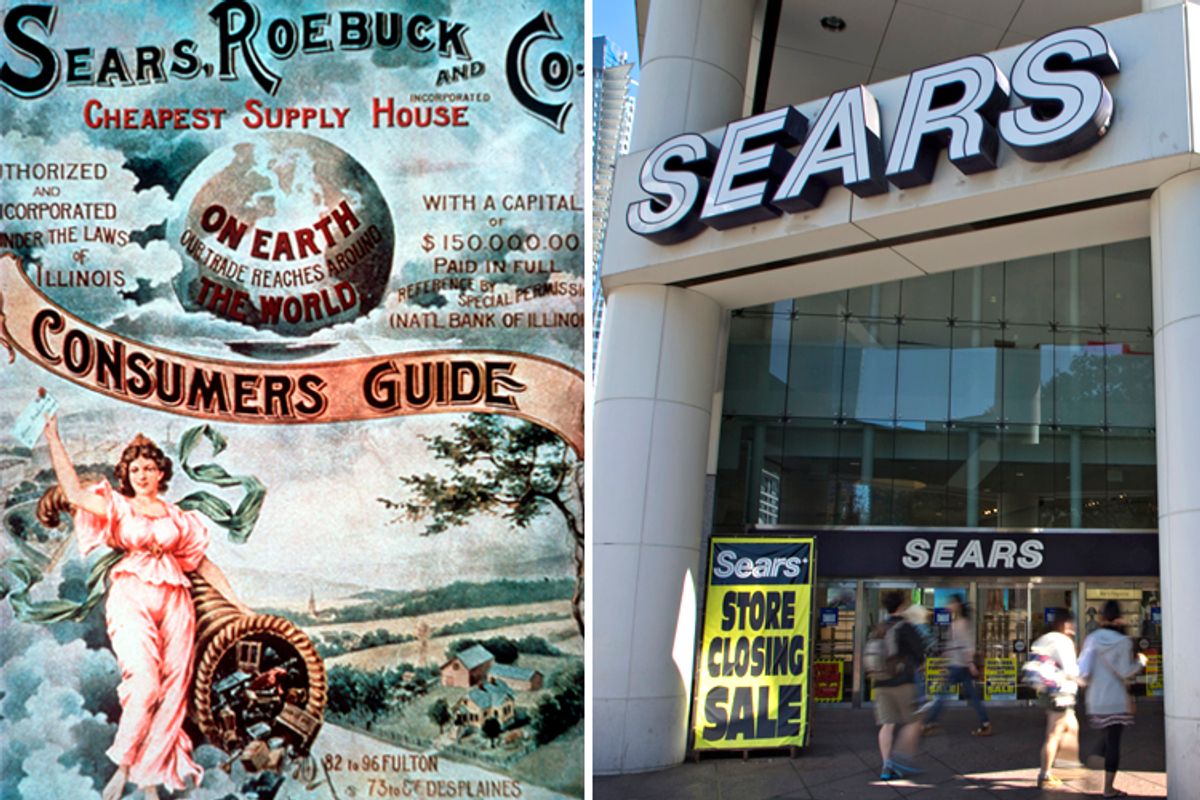 You shopped at Sears. You wore Toughskins jeans. You paged through the Fall/Winter catalog, thumbing frayed edges onto the toy section. You mowed your grass with a Craftsman lawnmower, and ate hamburgers off a Kenmore grill.

I know you shopped at Sears, because everyone shopped at Sears. In the history of the United States, there has been no more ubiquitous, unifying experience -- religious, entertainment or retail -- than shopping at Sears. For a culture that defines itself by consumption, it’s only fitting that this should be a department store. In 1972, the year Sears began building the world’s tallest building in downtown Chicago, three out of every four Americans visited one of its locations every year -- a larger proportion than have seen "The Wizard of Oz." Half of all households held a Sears credit card -- more than go to church on Christmas. Sears’s sales accounted for 1 percent of the Gross National Product.

In an internal merchandising plan written later that decade, a Sears executive identified the company’s audience, and its identity: “Sears is a family store for middle-class, home-owning America. We are not a fashion store. We are not a store for the whimsical, nor the affluent. We are not a discounter, nor an avant-garde department store…We reflect the world of Middle America, and all of its desires and concerns and problems and faults.”

Taylor had worn the same sign outside two about-to-close Sears stores in the suburbs, so he didn’t hold much hope for the future of the retail company whose demise he was advertising. Sears has shut down 300 stores since 2010, and lost $1.36 billion last year. But the State Street store, which closed Sunday, is symbolic. Sears has done business in the heart of its hometown since 1932, making State Street the flagship of the entire chain.

“Sears, in a few years, you might not see them anymore,” he said. “Basically, it’s competition with Wal-Mart and Target. If a Wal-Mart moves in, Sears’ll be gone in a year. They can’t compete with the prices. I don’t think people shop as much quality as price.”

Inside the store, dozens of customers paged through racks stuffed with shirts and pants marked 75 percent off. That was about all Sears had left. Up on the third floor, in the manly tools section, was a display of gleaming Craftsman wrenches and a riding mower marked down to $749. Elsewhere, a gaggle of denuded mannequins overlooked a tray of $1 underwear.

As Taylor had suggested, the shoppers were the types of bargain hunters who have killed off Sears, and were now returning to pick over its corpse. Ashanta Myers clutched a handful of dollar panties, and a pair of khaki pants for her 13-year-old daughter’s school uniform. A year ago, Sears closed a store that had been operating in her South Side neighborhood since 1925.

“Sears is not that cheap,” Myers said. “When you put it in an urban community, you have more options that you can get it at your corner stores.”

Myers had purchased her winter coat at Sears, and her mother bought a washer and dryer, but she buys most of her clothes and shoes at neighborhood shops where she can haggle with immigrant merchants. They don’t last as long as Sears clothes, but at a third of the cost, who cares?

“My mom, every single appliance in her house is from Sears,” Myers said. “Her washer, dryer, stove, her luggage. She’s got a Sears credit card. With my aunts and uncles, when you got a little money, got your job when you were younger, they shopped at Sears. But times are changing, and there’s more stores opening up, and they got things cheaper.”

Sears is dying as a result of two not unrelated phenomena: the shrinking of the middle class and the atomization of American culture. It’s still an all-things-for-all-shoppers emporium that sells pool tables, gas grills, televisions, beds and power drills, then cleans your teeth, checks your eyes and fills out your taxes. But that niche is disappearing as customers hunt for bargains on the Internet and in specialty stores, and as the retail world is pulled apart into avant-garde department stores and discounters -- exactly what Sears promised it would never be. Maybe in 1975, a salesman and his boss both bought their shirts and ties at Sears, but now the boss shops at Barneys, and the salesman goes to Men’s Wearhouse. This divide is a result of the fact that, over the last two decades, the top 5 percent of earners have increased their share of consumption from 28 percent to 38 percent.

“As a retailer or a restaurant chain, if you’re not at the really high level or the low level, that’s a tough place to be,” John G. Maxwell, head of the global retail and consumer practice at PricewaterhouseCoopers told The New York Times in February. “You don’t want to be stuck in the middle.”

Sears has other problems. Image problems. As Ashanta Myers indicated, it’s still a place to go for durable items. You don’t want to cheap out on appliances, or on winter coats, especially in Chicago. But Sears’ clothing is both too expensive and too bland for modern shoppers. A generation used to working for dirt wages and expressing its individuality isn’t in sync with the mid-20th-century mass culture Sears still represents -- a culture in which everyone dressed the same, lived in the same little bungalows and earned roughly the same amount of money.

“I was on my way to H&M, and I saw there was a sale at Sears,” said Ashley Thinnes, a 23-year-old waitress and college student who was holding a plaid flannel shirt and a scarf, her first Sears purchases since her mom took her shopping there as a teenager. “It’s kind of in the realm of they don’t carry styles people like after the age of 17 or before 35. Forever 21 and H&M, they have $10 shirts, and the floor’s shiny.”

It says a lot about America’s class stratification that Sears -- which caters explicitly to the middle class -- long ago lost its role as the nation’s number one retailer to Wal-Mart, which caters explicitly to the underclass. It also says a lot that Sears’ decline in profitability began during the recession of 1974, the moment that America’s post-World War II economic boom finally hit a wall, as a result of inflation, the Arab Oil Embargo and competition from foreign manufacturers. The “real wage” had peaked the year before, at $341 a week, so Sears’ model customer -- the blue-collar middle-class homeowner -- never again had as much purchasing power. The Sears Tower was also completed in 1974, so the nation’s tallest building represented the pinnacle of its prosperity. (In 2009, it was renamed the Willis Tower, after a multinational insurance broker.)

“The thought of a nation without Sears also is one more sign that the economic archetype of 20th-century America, built on manufacturing and distributing hard goods to an expanding middle class, is winding down,” wrote Crain’s Chicago Business in a report titled “Sears -- where America shopped.”

Where does America shop now? In the country it shops at Wal-Mart, and in the cities, it shops places like Howard Street, a strip on the Far North Side of Chicago that has a liquor store, a pawn shop, a walk-in dental clinic, four sneaker boutiques, a Ready Refund tax service, a dollar store, a Bargain Paradise furniture emporium, a currency exchange and a cell phone store. Pretty much everything Sears sells, at lower-class prices. It’s a street Ashanta Myers would find familiar. The owner of a shoe store moved to Howard Street from the suburbs, in search of cheaper rent -- and quickly found out why it’s such a bargain.

“The customers want to haggle over everything,” she said. “It doesn’t matter if it’s a $45 pair of Converse. And they don’t want to pay tax. They claim they can go down the street and they don’t have to pay tax. I’ve always wanted my own business. At first, I was going to get a dollar store. My son told me to get a shoe store. If I had a dollar store, stuff would sell. It’s cheap. People are into buying cheap things.”

An entrepreneur could make big bucks in the post-recession marketplace by placing all these businesses in a single strip mall, which could be prefabricated and franchised out to every urban neighborhood and small town in the United States. A single poverty-pimpin’ conglomerate could develop thousands of these little malls, from Bridgeport, Conn., to Stockton, Calif -- replacing the dying middle-class malls traditionally anchored by Sears.

By throwing a going-out-of-business sale at its State Street store, and finally cutting its prices to a level everyone can afford, Sears accomplished something it hasn’t done since its heyday. The bargain hunters roaming the floors constituted one of the most diverse crowds I’ve ever seen -- African Americans from the South and West Sides, old ladies with perfume and purses, Asian immigrants, white college students, bearded Middle Easterners, Latinos, and middle-aged professional men in trench coats. Once again, America was shopping at Sears.