Glaring limits of the Civil Rights Act: We need to redistribute wealth

Even if racism were wiped out tomorrow, we'd still need to address pervasive racial wealth inequality. Here's why 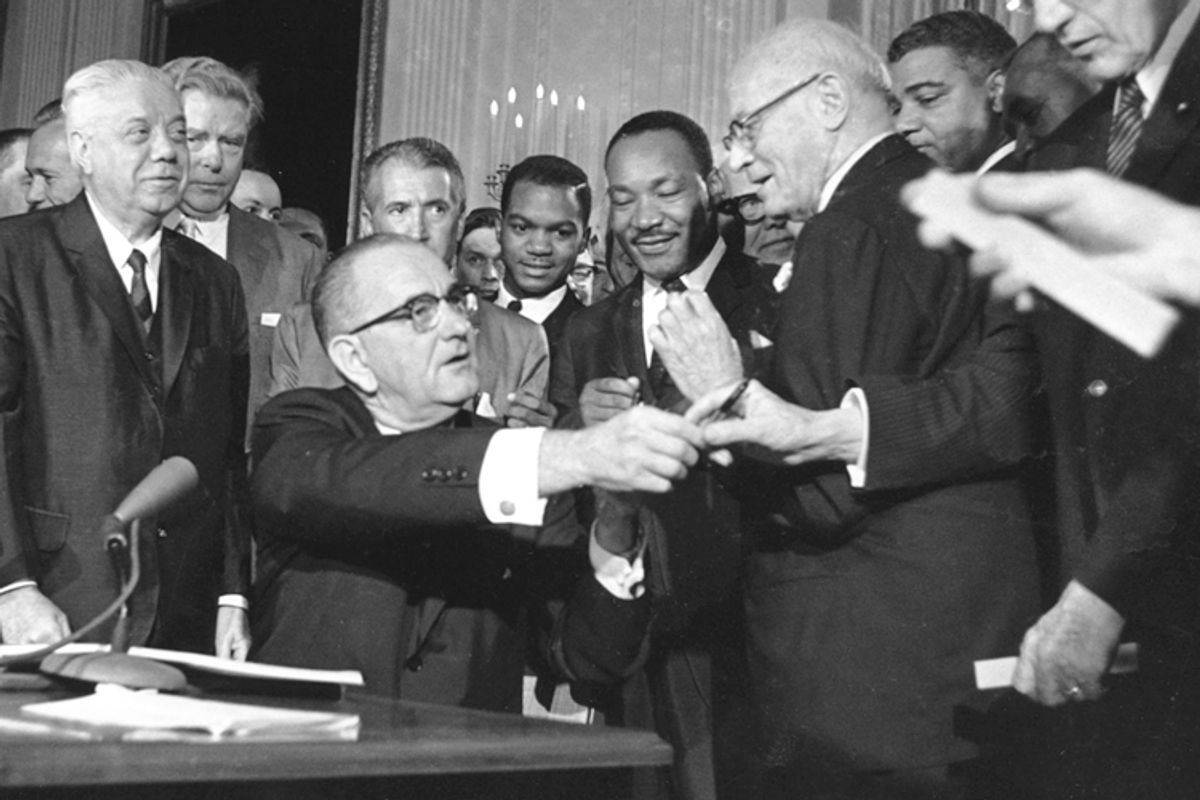 Although the Civil Rights Act, the landmark legislation which just reached its 50th anniversary, made great strides in desegregating the economy, economic discrimination is still widespread, and anti-discrimination legislation alone can never rectify the economic damage inflicted upon blacks by slavery and our Jim Crow apartheid regime. The Civil Rights Act was a mild reform, all things considered, but one conservatives fought with vigor and one many conservatives are still bitter about to this day.

When the Civil Rights Act passed in 1964, the primary purpose was to root out discrimination in public accommodations (like hotels and movie theaters) and in employment. The former purpose–eliminating public accommodations discrimination–has received renewed attention from conservatives lately who find it to be an infringement on the rights of racist business owners to be racist. GOP favorite Rand Paul expressed this view in 2010 and Cato’s Ilya Shapiro expressed it just a few months ago on MSNBC.

These aren’t new concerns, of course. One white Nashville resident interviewed at the time of passage said the same thing about the Civil Rights Act: “I also think that it is in violation to my civil rights if someone can say you must serve me.” Nonetheless, it is telling that the embarrassment attached to claiming it is the racists who are the real victims in all of this has sufficiently subsided within the mainstream conservative movement that even GOP leaders are willing to reinvigorate the claim. I suppose that’s par for the course for a movement that’s also pushed the evisceration of the Voting Rights Act and pursued an intentional campaign of voter suppression that disproportionately targets blacks and other people of color.

Despite the fevered conservative protests over the extensive reach of the the Civil Rights Act, it has not totally succeeded in its aims. Lunch counters and hotels no longer outright ban blacks from service, a relatively easy thing to root out. But academic studies show that employment decisions continue to be made upon race-based lines.

Clearly, more progress needs to be made on the anti-discrimination front, but anti-discrimination, even if it were entirely successful, would still never be enough to rectify the economic harms inflicted by centuries of slavery and racial apartheid.

One of the consequences of the racial caste system that characterized American society prior to 1960 is that black families were prevented from accumulating economic wealth. Because wealth is the kind of thing that is passed down generations and the kind of thing that grows and grows, this initial racist starting point has opened up a yawning racial wealth gap that simply cannot be closed without intentional policy aimed at doing so.

In 2010, the median black family held around $16,000 in wealth, while the median white family held around $130,000. And this is not just a function of the fact that whites have higher incomes than blacks. Even when you control for income–comparing white and black families in the same income range–white families are three times wealthier than black families. The racial wealth disparities hold up and down the income ladder.

As Thomas Piketty’s groundbreaking book “Capital in the 21st Century” has detailed: wealth has a tendency in a capitalist economy to concentrate into the hands of a few and travel down generations through gifts and inheritances. Even if racism were wiped out tomorrow and equal treatment became the norm, it would never cease being the case that the average white person has more wealth than the average black person. We could equalize everything else in society, and racial wealth inequality–plus all of the political power disparities that accompany such a thing–would continue into perpetuity.

Thus, those actually serious about righting the wrongs of enslavement and Jim Crow apartheid must support more drastic leveling efforts. Beefed up anti-discrimination, which is both necessary and good, will not be enough. Ideally, we could work towards reparations in the form of redistributing wealth along racial lines. With that an unlikely possibility though, we can at least think about ways to redistribute wealth more generally from those with wealth to those without it, something that would have a similar, albeit more attenuated, effect as reparations given who the wealthy and non-wealthy happen to be.