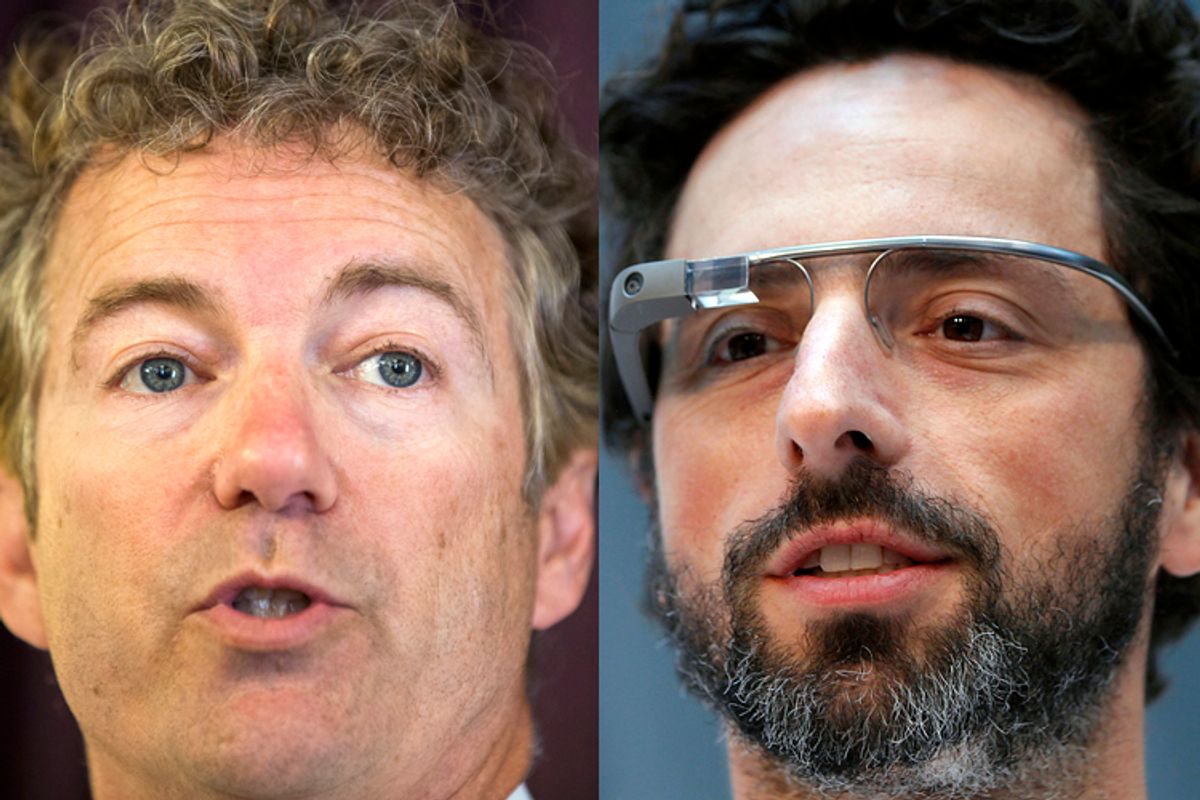 Here's how the free market works. Libertarian think tanks get paid by private corporations to host conferences designed to push industry-friendly regulation. It's a beautiful thing to watch.

The emergence of Google as a major lobbying force in Washington is a generally well-reported story. But the Washington Post added fresh, intriguing details over the weekend that reveal the search engine company has been deeply involved with financing and organizing conferences on Internet regulatory policy at a major center of libertarian research -- George Mason University.

Since at least the 1990s, George Mason has been sucking up millions of dollars of libertarian funding -- from the likes of the Koch brothers and others -- and has in the process established itself as a major, perhaps even preeminent, player in the world of libertarian thought. The Washington Post article, with the help of emails discovered through a public records request, details how Google helped set up two conferences devoted to "Internet search competition" in 2011 and 2012 that were attended by "regulators from the Federal Trade Commission, federal and state prosecutors, top congressional staffers."

What the guests had not been told was that the day-long academic conference was in large part the work of Google, which maneuvered behind the scenes with GMU’s Law & Economics Center to put on the event. At the time, the company was under FTC investigation over concerns about the dominance of its famed search engine, a case that threatened Google’s core business...

On the day of the conference, leading technology and legal experts forcefully rejected the need for the government to take action against Google, making their arguments before some of the very regulators who would help determine its fate.

For the past several years, reports the Post, the George Mason Law and Economics Center has received an annual donation of $350,000. In the first of the two conferences, Google was listed as a co-sponsor. For the second, however, "Google’s involvement was not publicly disclosed."

Even as Google executives peppered the GMU staff with suggestions of speakers and guests to invite to the event, the company asked the school not to broadcast its involvement.

From Google's standpoint, it's easy to understand why it would not trumpet the news that it was helping to organize a conference designed to fend off burdensome regulation. That's the kind of thing that makes journalists and anti-trust regulators grouchy.

But I'm less certain why George Mason would feel any need to oblige. Because in a perfect free market, one in which all actors are free to pursue their own self-interest, one would not only expect private companies to pay think tanks to promote their views, but be actively disappointed if they failed to do so.