In the Season 7 premiere, Peggy breaks down and Don's escapism begins to get old 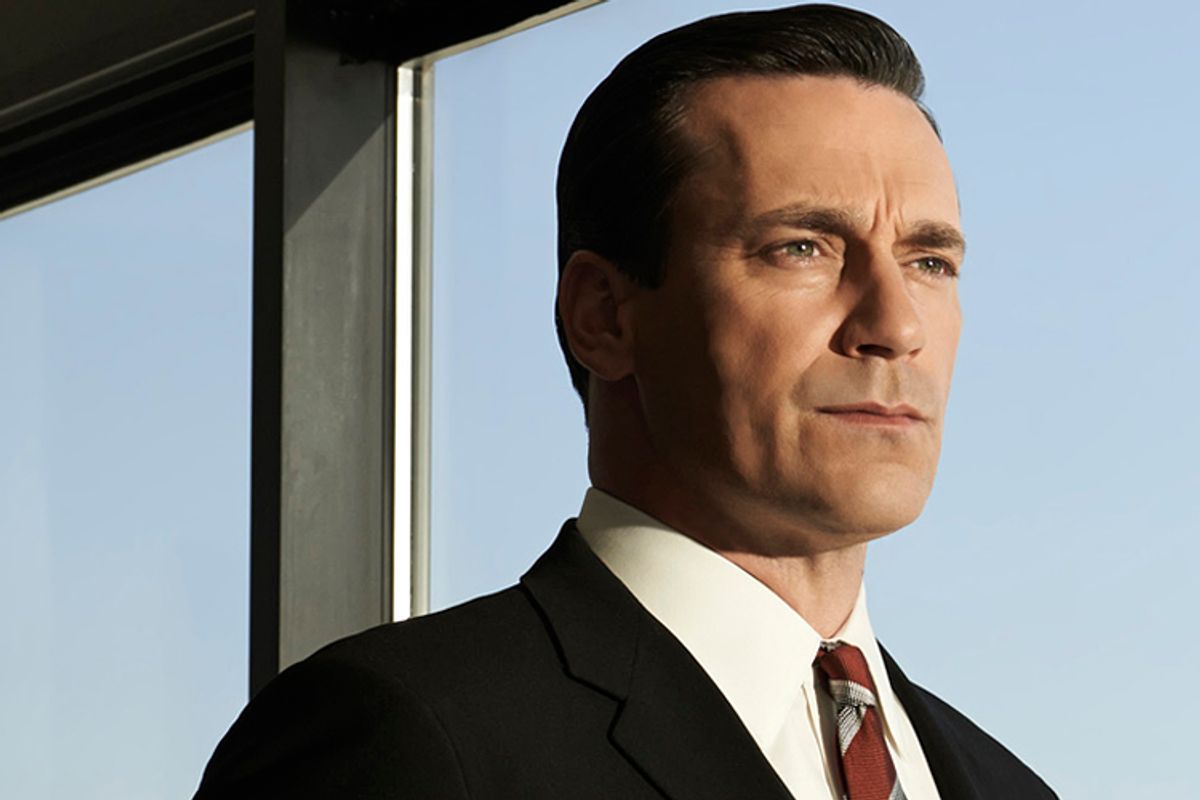 “Do you have time to improve your life?” Freddy Rumsen asks in the first few minutes of “Time Zones,” the seventh season premiere of “Mad Men.” With Don flying back and forth between coasts, Peggy juggling work and landlord duties, and Roger juggling extreme recreational sports (Orgies? Drug binges?), the answer is clearly no. Ken, in fact, snaps that he doesn’t “have time to take a crap.”  Megan tells Don they don’t have time to have an argument. There’s a feeling of desperation at the opening bell here, a sense that, for these characters, the clock is ticking down. And none of them seems to know where to start.

“Mad Men” has always been a show about melancholy, alienation and longing. But if there’s one reigning mood at the start of this season, it’s loneliness. Over and over, we find these familiar faces alone in a crowd. Peggy pitches to her new boss, Lou Avery, in a roomful of co-workers. Roger wakes up surrounded by half-naked bodies. Don reunites with Megan and they rush off to a busy restaurant where Megan’s producer shouts like a carnival barker. Even in the show’s most intimate moment, Don and a pretty widow talk and cuddle surrounded by other airplane passengers.

The episode is also focused on the illusion of forward motion. Everyone is anxious to proclaim that they’re embracing change but no one is actually doing it. Against a messy backdrop of naked strangers, a pretty girl tells Roger, somewhat absurdly, “I feel like we really got somewhere last night.” Later, Roger’s daughter explains that she’s evolved past anger and she forgives her father for everything – yet she’s not enlightened enough to resist listing each of his offenses on the spot. Peggy rails against her new mediocre boss, and proudly tells Stan, “I’ll just stand out here all by myself.” But in the next scene, she finds herself alone in her apartment and instead of standing, she drops to her knees and cries. Megan reassures Don that the coyotes they hear outside are far away, then she admits that she feels nervous “about everything.” Pete tells Don, of Los Angeles, “The city’s flat and ugly and the air is brown, but I love the vibrations.” But there’s something empty about his gushing, and about his lonely office and the fact that his apartment is “next to the tar pits.” Throughout the episode, every bit of glowing praise seems to be followed by a confession that things aren’t quite right. We are primed for the second shoe to drop, waiting for Roger’s daughter’s statement that “everything is wonderful” to change to “everything is awful,” her forced smile curdling into a grimace.

“In these days of wars and rumors of wars – haven’t you ever dreamed of a place where there was peace and security, where living was not a struggle but a lasting delight?” These words appear on the giant TV screen Don purchased for Megan, and Don looks alarmed when he sees them. The search for peace and security, for utopia, for lasting delight, is the central, fruitless search of Don Draper’s life, of course. And it’s a search that he and his co-workers conjure time and again in order to make a client’s product seem like a shortcut to everlasting happiness.

But what word feels more foreign at this point in Don’s life than “delight”? Over the course of the show’s sixth season, Don’s face hardened into a scowl, and it hasn’t budged since. “I feel completely at ease,” Don says through gritted teeth in an early scene, and he couldn’t look less at ease in that moment. Don has no peace, no security, and no access to lasting delight.

And even though Don looked poised to seek out a more authentic life at the end of the show’s sixth season, taking his kids to see the house he grew up in, this season feels like a serious retreat from that moment. In fact, Don demonstrates for the millionth time that, while he can’t remotely tell the truth to his own wife, he can open up to a complete stranger on his flight back to New York. Intimacy for Don is easier with strangers. In contrast, honesty in the company of his old friends and children and wives is nearly impossible for him.

While many have already proclaimed this a classic episode of “Mad Men,” it’s hard not to feel that the show is making the same fake progress as its characters. Each season is starting to resemble an animated cartoon where the same landscape rolls by over and over again. We’ve seen a lot of these story lines before, and the writers are going to have to work hard to make this round of searching for utopia feel fresh to us. When Don sinks into easy conversation with the widow on the plane, when he presses his lips against her hair, it’s hard not to cringe a little. Even Don’s move to sit outside in the cold at the end of the episode feels slightly forced. Yes, Don is making baby steps to honor the truth. He told the widow he was a terrible husband. He wants to punish himself for disappointing Megan and himself, for being on the brink of divorce yet again.

But Don’s escapism has lost the power to surprise us. He seems doomed in the same old ways he’s been doomed before. While the premiere was thematically coherent (as it always is), story-wise and character-wise it felt a little stagnant, particularly for a season premiere. The clock is ticking down, and instead of starting on a new, more authentic footing, he seems to be right where he was at the start of Season 6. “It’s not a timepiece, it’s a conversation piece,” says Freddy, playing Cyrano for Don. Don needs to stop panicking about repeating past mistakes, and simply show up and have an honest conversation with his wife. But he’s not about to change a thing. As he himself tells Megan, “I’m scared but I don’t want to turn the lights back on.”

The real joys of “Mad Men” this season will likely come from other sources. Peggy, Joan, Pete and Roger remain transfixing characters, and their fates, at least, are still uncertain. Will Peggy get the career and the love that she deserves? Will Pete ride those good vibrations into a new life? Might Roger finally dig his way out of his funk? Can Joan finally get the respect she’s craved for so long?

Don’s fate, though, seems pretty clear. “Please don’t flick any cigarettes off the balcony,” Megan tells him. “I don’t know how, but everyone says they can tell where the fire starts.” Before this final season is over, Don is going to start more than a few fires. When there’s no time left to improve your life, sometimes you have to burn the whole thing down to the ground instead.