The actress on playing a slave in a fictional realm, handmaiden hookups, and working with the late Paul Walker 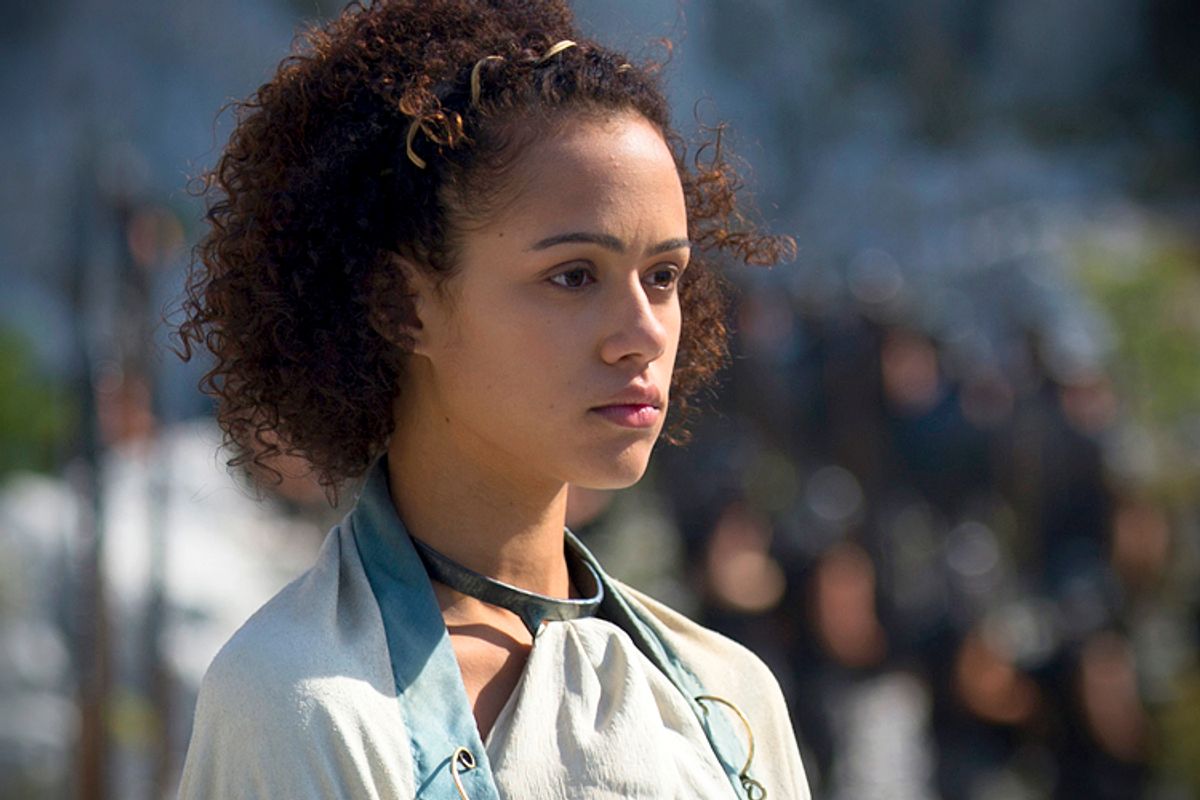 Nathalie Emmanuel in "Game of Thrones" (HBO/Macall B. Polay)
--

In the “Game of Thrones” season premiere, when warriors Daario Naharis and Grey Worm were busted for goofing off on the Khaleesi’s time, the latter received an additional warning glance from fellow former slave Missandei.

Some superfans have chosen to interpret this flash familiarity as a hint that the two will pair up romantically. As Grey Worm is the commander of the Unsullied, and the Unsullied are eunuchs, this seems unlikely.

Nathalie Emmanuel, the 25-year-old British actress who plays Missandei, offers a much more rational explanation in an interview with Salon. Alas, for those who pray Daenarys Targaryan’s occasional penchant for hooking up with her handmaidens will extend to Missandei, Emmanuel tries to dispel that notion as well.

So, what’s behind that sharp look you threw Grey Worm in the season premiere?

What it is between those two is that they come from similar backgrounds – obviously very different in that he’s been horribly mutilated and tortured and has experienced all kinds of horrendous things. But, out of everyone in that group, they are the only ones who understand one another. They both have been raised under these extreme circumstances where they have to be very, very disciplined. So, I imagine that, in the beginning of that episode when she’s like, “Where are Daario and Grey Worm?” and they’re gambling, Missandei’s already gone and said, “She’s going to be very cross with you. What are you doing?” So, when she gives that look, it’s like, “I told you so!” It’s that, “I did warn you” kind of thing.

You see it almost as a brother-sister kind of relationship?

It’s her job in a way to aid that transition for him as Unsullied warrior to a part of the Queen’s guard. I think she would probably feel a little responsible for him if he’s misbehaving – or any of them. I feel like Missandei would make sure everything is in place for her queen. When they’re not doing that, she can say, “What are you doing? This is not how we do things.” I don’t know if she would be the same way towards Ser Jorah or Ser Barristan because they’re knights. She doesn’t really understand their world. She would probably be quite closed off. But Grey Worm is one of her people from her background so she feels she can be that way with him, maybe.

I've heard that your character complicates a bit this season. What can you tell me about that?

The thing about Missandei is she’s very, very, very good at being on the job. She’s got a tough exterior. She doesn’t like to look weak. She only really displays emotion when it’s deliberate. She’s coming from a harsh background, so she’s built up this exterior. You start to see how she has feelings and how she has a human side to her that she hasn’t been free to show before.

What's it like to play such a stoic character?

My first idea when I thought about how I was going to do this – when we first met Missandei she was kind of like that business woman in business mode – I thought maybe it had to be a physical thing about her. So, I really tried to play her quite still. She’s not animated at all. You ask her a question and she gives you the right answer. She’s like a calculator or a book, you know? Almost mechanical. I don’t think you ever see her yell or shout or anything.

The only exception was the finale when she’s announcing Daenerys to the slaves of the Yunkai. She’s probably learned very much in her life of trying to survive to do everything very correctly. How she stands. How she speaks slowly so people can understand what she’s saying. It’s that conditioning that she’s had to learn as a girl growing up into slavery. Even though she’s very intelligent, she’s had a very rough time, and she’s probably seen some things, so she’s always trying to not get herself in trouble or keep her head down. I’ve tried really hard to maintain that with her because it doesn't matter that she’s been liberated now. All the years of conditioning take a very, very long time to change. So I think that’s something that I do quite deliberately just in how I stand when I’m playing her and my reactions are sometimes very, very small. But they’re there because I think she’s very quick and she knows how much she can emote and how much she can’t and in what situations. So she’s very careful, I think.

When I was talking to some publicity folk at HBO about your upcoming story line, there was an implication that there would be some romance. Many who saw the last episode now think it has to do with Grey Worm. But what about Daenerys?

There is so much speculation around that [laughs]. It’s really quite funny to me. I read one section in the book – I can’t remember which – where it’s like, ‘Daenerys for the first time since Drogo feels aroused,’ I guess, ‘masturbates, and one of her hand maidens helps her out.’ But I’m pretty sure that was pre-Missandei. And it wasn’t Missandei in the book, anyway. A lot of fans have definitely made it clear that they would quite like that to happen between Daenerys and Missandei. But I really doubt that’s happening.

Sure, but it’s hard not to speculate in that direction when it comes to “Game of Thrones." When it comes to sex, HBO tends to expand on what may only be a suggestion in the books. Look at Oberyn Martell’s bisexuality.

No, I understand. I totally get it. With “Game of Thrones,” there are no real limitations. But Daenerys and Missandei’s relationship is so much more of a respect thing. Daenerys is really getting to trust Missandei deeply, and Missandei loves her because she’s in awe of her. She respects her. Daenerys liberated her. I suppose, in a situation like that, feelings of love, or romance, could blossom. But Missandei is so grateful for her position. Unless it was given to her as a job, I don’t think she would ever cross that line.

In the United States, there is currently a lot of discussion of "good" and "bad" representations of African-Americans in popular culture. As a person of African descent, were you concerned at any point about portraying a former slave?

It’s definitely something you have to acknowledge. But people have asked me in the past whether it bothered me – the fact that there’s not many people of black origin on the show, and then the ones that are have come in and been slaves. But I just feel like, for whatever time period this show was set in, the reality is, if you were not a rich white person you would have been a slave. History just shows us that, right? It is such a hard thing, but I feel like what’s so great about both [Missandei and Grey Worm] is that, yes, they were slaves, but they’re very good at what they do. So, even though people might see that as a bad representation, I think it’s not because they are also both very smart, educated people as well – which is a positive thing, for sure. I definitely think about that because it is obviously a part of every black person’s history in a way, even though we’ve come so far.

And what about the image of an army of dark-skinned slaves being led to freedom by a little blond girl?

I think Daenerys is coming from a place where she was kind of sold, in a way. When she was married off to Drogo it was for an army. She was kind of passed around like currency, and I think it’s an issue that’s close to her. I don’t think it comes down to race. I think it comes down to relating to an experience and it actually being something that she felt. If you want to talk about whether it’s to the same extreme, she’s not necessarily going to have experienced the level of violence or abuse that maybe Missandei or Grey Worm would have in that kind of environment. But fundamentally she was sold for the advancement of somebody else, for her brother.

After today, you go back West to finish shooting “Fast 7” [the next in the Fast & Furious film franchise], right?

It’s been a few months, at least. It’s kind of cool, but going back is going to be tough just because there’s this huge hole there. We had a hiatus because Paul Walker passed away when we weren’t quite finished. So, they had to kind of rethink things. We kind of had this hiatus so that they could work out what they were going to do to finish it in a way that was respectful.

Did you work with him?

Yeah, I worked with Paul. He was a wonderful man – a lovely, considerate guy. Just the most down-to-earth actor you’ll ever meet for the huge movie star as he was. I feel really blessed that I got to work with him even though it was for a very short time. That’s why it’s going to be sad to go back because, obviously, he’s so a part of it and such a huge part of the family. But at the same time, I’m really excited to celebrate him as well with the finished piece.

Back to "Game of Thrones," are there any secrets you can tell me about? What should I be looking for as the character starts to grow?

No spoilers. One thing I can tell you: You learn about Missandei’s past, like where she’s come from. Also, I got some amazing dresses this season – because, you know, she has her riding gown, her gear. That’s probably the one thing she has and maybe something she sleeps in, I would imagine.  I went to the fitting before we started filming and [the wardrobe person] is like, “I’ve got three or four gowns for you,” and I’m like, “What? I get gowns now?” Amazing. It literally made my life.