On last night's episode, many starved. Some ate and drank themselves to death 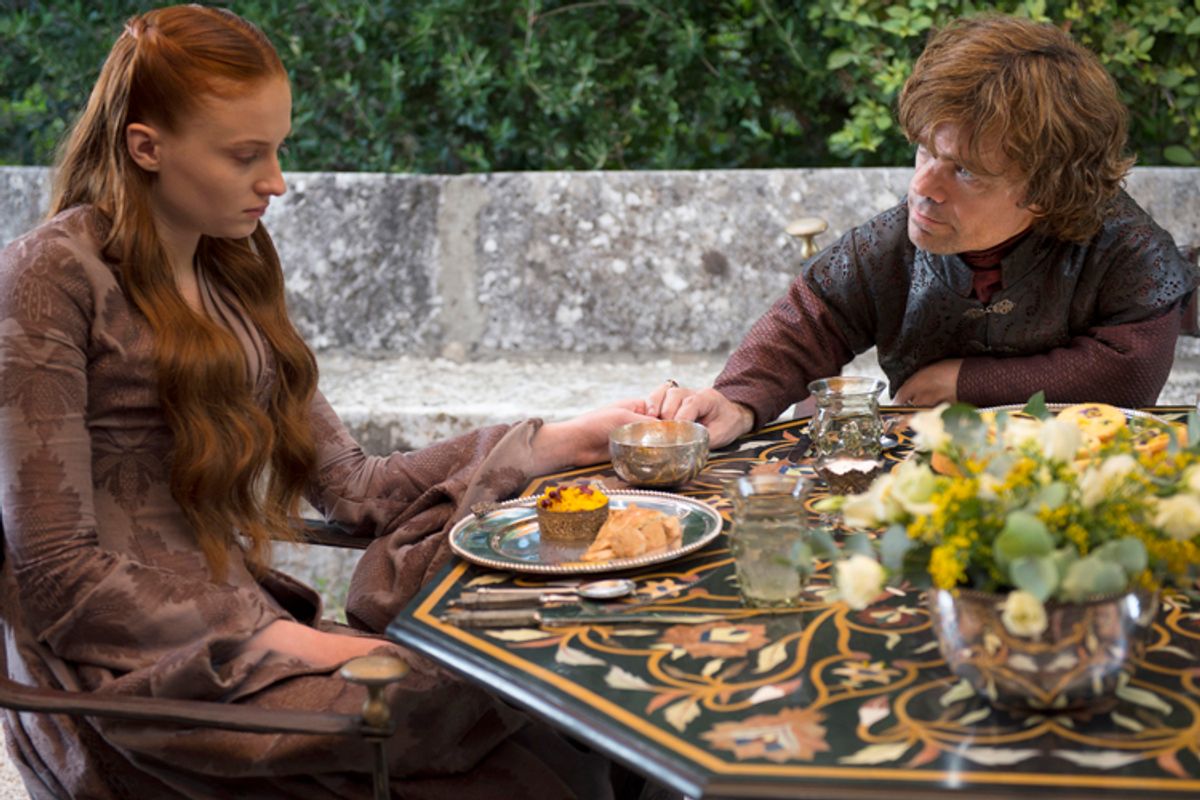 Sophie Turner and Peter Dinklage on "Game of Thrones" (HBO)
--

And now, heed the deafening buzz as “Game of Thrones” fans puzzle over that greatest of Westerosi gifts: a mystery that cannot be resolved by simply resorting to the source material. For indeed, as regards the question of who killed the royal jerk Joffrey Baratheon, it is not known. Close readers of George R.R. Martin’s original books have come up with several plausible, but often complex theories. Some of the schemes placing a laced goblet into the hands of the king or a poisoned hairnet in Sansa Stark’s hair for imminent and deadly deployment are probably way too serpentine to be tackled on the TV show, abridged as it is. Moreover, there’s a strong argument that as long as we know who is suspected of murdering Joffrey, it doesn’t matter who actually did it. Nevertheless, expect to play at least one round of Follow the Cup with your Thronie cohorts in an effort to pinpoint who passed along the tainted wine.

A far more winnable and rewarding post-“Game” game to play this fine Monday morning might be Follow the Food. As last week’s premiere dealt heavily with family, this episode rather explicitly resorts to food as a theme. Shortly after the opening credits, Tyrion Lannister sits in relative comfort, munching away at a small feast of wild boar. Upon noticing that his brother Jaime, mentally mired in his own straits, doesn’t touch his food, Tyrion remarks, "Why is no one eating? My wife wastes away while my brother starves himself." They go on to have a conversation about how Jaime is powerless without his sword hand.

Soon after, Tyrion passes Lord Varys on the way to the king’s breakfast and asks why the Spider is not headed the same way. Varys replies that foreigners are not welcome at such events. Tyrion attempts to convince Varys to assist him in a scheme to protect his mistress Shae, but Varys refuses, stresses that he is powerless to protect himself from the wrath of the deceived should such a scheme go awry.

Meanwhile, back at the Dragonstone, Stannis puts down his dinner in disgust, grousing that the “meat is off.” As we know, Robert Baratheon’s brother is still smarting from his navy’s defeat in the “Battle of the Blackwater.” As his wife informs him, the coffers of his fortress are nearly empty. Without food, without money, without ships, without morale, Stannis is now powerless to lay any further claim on the Iron Throne. After telling a story of less lean times, Selyse Baratheon turns to Melisandre and asks if she’s ever known “true hunger.” The Red Witch replies that it was all she’d known until she became a disciple of the Lord of Light. Of the three at this meager table, she is, of course, the most powerful.

Later, Bran hunts as Summer, the direwolf. When he is snapped back into his own body, he says that he was only hungry. His companion Meera replies, “We’re all hungry.” No one could be more powerless than starving children traveling through a frozen wilderness. But when Bran’s consciousness inhabits his wolf, he gains power – and he eats.

Right before her husband meets his long-anticipated demise, young Queen Margaery uses her newly acquired agency to distribute food to the less fortunate. She decrees, in Joffrey’s name, of course, that the leftovers from their wedding feast will go to the poor. Cersei, the former Queen regent, secretly and spitefully countermands that order, signaling the power struggle about to ignite between them.

This list would not be complete without the Queen of Thorns, Olenna Tyrell haggling with Tywin Lannister over which house contributed more to the cost of the feast. Later, the wily old woman quips, "You must excuse me. It's time I ate some of this food I paid for." It’s worth noting that Olenna Tyrell, seated in a power position on the dais near Joffrey, had access to his cup and everything else he ate, used or touched. She also had a clear motive for murdering him, being well aware of his sadistic tendencies. Her granddaughter, despite now being queen, would soon be in great danger. Regardless of whether his new in-law killed him, Joffrey's last display of power involved scoffing down a hunk of dry cake.