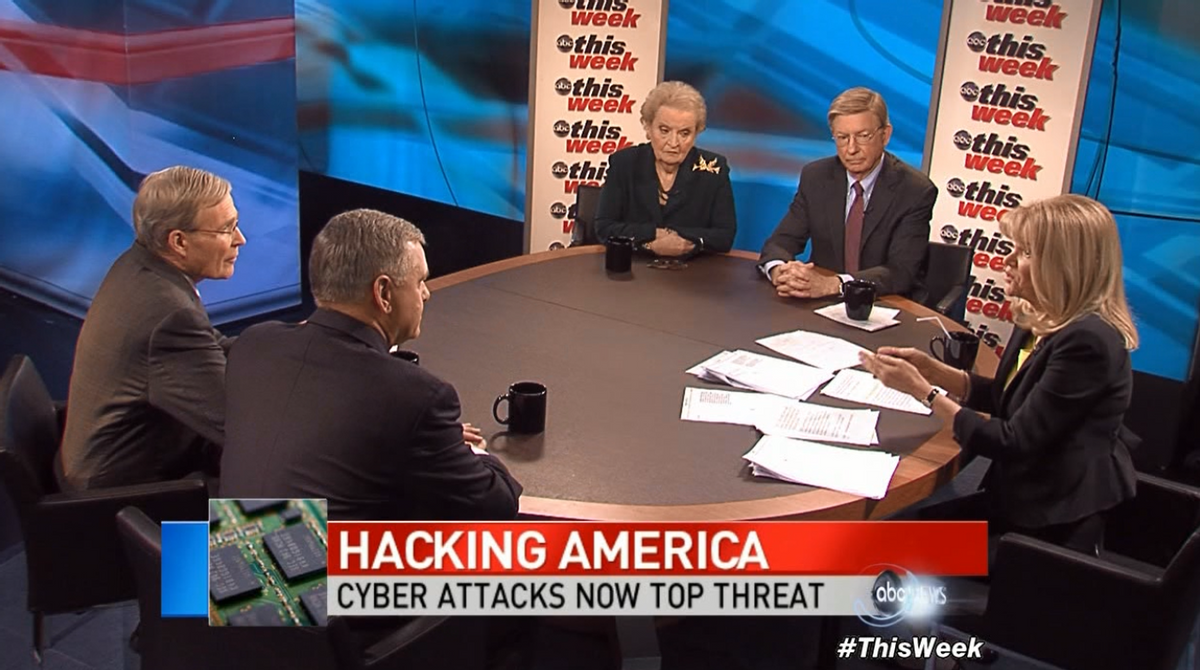 ABC News recently hired Laura Ingraham to be a regular contributor to their prestigious Sunday morning political talk show, "This Week With George Stephanopoulos." Why on earth would anyone hire Ingraham, a second-rate right-wing bomb-thrower whose shtick is well past its sell-by date? You could ask ABC News, but they'd presumably answer with boilerplate press release-ese about how they seek out a "diversity of viewpoints" and welcome her "provocative" take on world events. Read Digby for a good rundown of exactly how provocative Ingraham's hot takes have been -- Ingraham's greatest hits includes writing a book in which a central, reoccurring joke was that Michelle Obama constantly ate or craved ribs -- but Ingraham's not the only sorry character ABC has picked up recently.

Last October, "This Week" hired Bill Kristol, the bumbling neoconservative scion, who is famous for his disastrous predictions and his even more disastrous lobbying for war.

In addition to being morally culpable for the meaningless violent deaths of hundreds of thousands, Kristol is also a terrible pundit. He is not just terrible at predictions, he is also dull. He was too lazy a writer and thinker for the New York Times -- a paper that still pays Thomas Friedman handsomely -- leading them to decline to renew his contract after one year as a columnist. (He moved, naturally, to the Washington Post.) Only a Sunday show producer (or Washington Post opinion page editor) could imagine that Bill Kristol's take on the issues of the day would be useful or enlightening or even entertaining to anyone.

More recently, ABC picked up Ray Kelly (as a "consultant," not a mere contributor). Kelly is the former police commissioner of New York City, best known for his racist policing tactics and his blatantly dishonest defenses of same. In November 2013, New York City voters overwhelmingly voted to elect as mayor a man who made the removal of Kelly, and the complete rejection of Kelly's entire philosophy of policing, a cornerstone of his campaign. Kelly, whose police department routinely lied to journalists (and beat and arrested a few too), is considered a law enforcement genius, because violent crime in New York, having already plummeted from a historic high years prior to the election of Michael Bloomberg, remained relatively low during Kelly's tenure as commissioner, probably due to environmental and historical trends. He is also considered a great and important man because he knows how to schmooze with the smart set.

Kelly worked for a Democratic mayor and a centrist independent one. He considered running for office as a Republican, but he is probably more of an authoritarian "centrist" than a movement conservative. Still that's three hires in six months that ought to disgust any decent person. (Even conservatives, who ought to be embarrassed to be "represented" by Ingraham and Kristol). Whatever does it mean?

Perhaps ABC News is repositioning itself as more conservative. NBC's "Meet the Press" is struggling. It's easy to imagine a television professional thinking that NBC's problem is that viewers think it is too liberal, and that therefore the best way to beat it is to become more conservative. Perhaps they are over-correcting for the fact that "This Week's" Stephanopoulos is a former Clinton White House operative, although at this point that was a lifetime ago, and George has been studiously centrist ever since.

As has been well-documented, none of the big network Sunday shows are remotely liberal, "This Week" included. According to Media Matters' research, in 2013, "This Week's" guests and panel lineups were not appreciably more left-wing than its major competitors. (Fox's Sunday show was significantly more conservative, but that show isn't aimed at the same "insider" Acela corridor "centrist" audience that the other three fight for.) All the networks skew white, male and right-wing. If ABC is aiming to win over a more conservative audience, it seems to be scraping the bottom of the right-wing pundit barrel.

But maybe there was no strategic thinking behind these three hires at all. Maybe each one just made sense to whomever was responsible at the time. Maybe three completely odious people who do not in any way deserve such large and well-compensated platforms for their discredited opinions all just got hired by the same network because the news media elite, like the finance and political elite, refuse or are unable to recognize the obvious and total moral bankruptcy of members of their own clan.

Or maybe Bill Kristol just has an amazing agent.