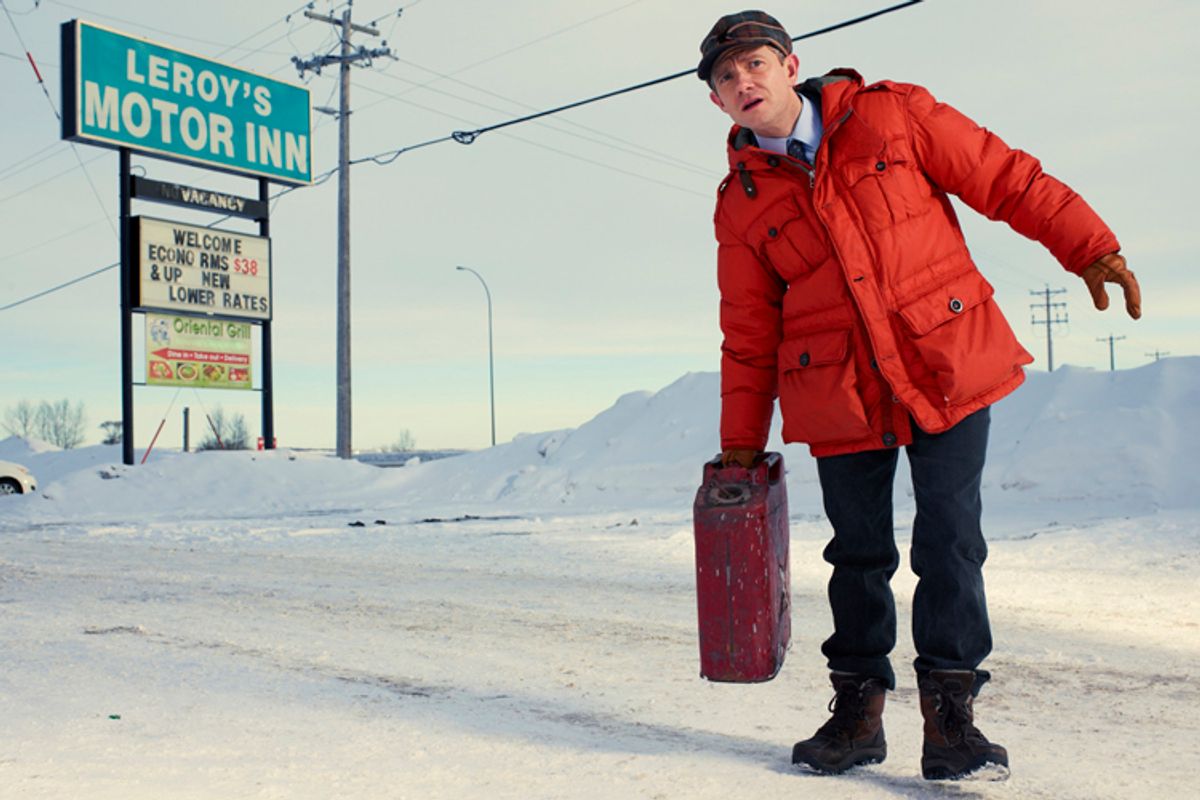 FX’s “Fargo” does not so much remake or reboot the 1996 motion picture as it does recall it. Martin Freeman plays a stammering, sad-eyed salesman in a puffy coat and ill-fitted suit driven to extreme measures in the extreme cold. But the character’s name is Lester Nygaard, not Jerry Lundegaard as in the original. Neither their straits nor their actions are identical, only similar. The hero of Joel and Ethan Coen’s darkly comic thriller was a pregnant police officer played with a spectacular Midwestern accent by Frances McDormand. The equally tenacious de facto chief investigator of the TV version (also written by the Coens) has the accent, but no baby on board. The former is Marge – or “Margey” – Gunderson. The latter is Molly Solverson. There are cheerful locals, suppressed resentments, kidnappings, sudden, knee-jerk murders, and lots (and lots) of snow. Even the score is similar.

Where "Fargo" fails is where the familiar elements fail to live up to those of the archetype. But it still manages to capture the movie's overall tone and timing.  A mysterious stranger, played by Billy Bob Thornton in a distracting hairpiece, tries to pass undetected through the city of Bemidji, Minn., with an unwilling parcel attempting to kick its way out of his trunk. When he is waylaid by a car accident and his delivery permanently damaged, Lorne Malvo (Thornton) chooses, for reasons that may or may not amount to pure mischief, to insert himself into the desperate life of the aforementioned Lester Nygaard. Lester’s circumstances quickly go from bad to murderous and he finds himself as Malvo’s accomplice, and vice versa.

A few notes on casting here. Hiring Billy Bob Thornton to play a creepy psychopath feels a bit like hiring Morgan Freeman to play God or the president: It’s about right, but nothing we haven't seen before. Still, Thornton does add a bit of gleefulness that makes his character more than the typical dark outsider. Martin Freeman has made a career of being nebbishy. Here, he is sympathetic, yet his nebbish-ness feels a tad put on. Perhaps he’s struggling with the accent. Regardless, had Steve Buscemi never hamstrung Bill Macy into a blind fury, Thornton and Freeman's pairing might not seem dull by comparison.

The bright spot is Allison Tolman as Deputy Molly Solverson. On a show that takes place in a town whose quirkiness needs to be accepted at face value, believability is key. Tolman feels like a lifelong resident, friendly and unassuming. Yet her bright blue eyes, flushed cheeks and rounded edges make her Sherlock Holmes-style sharpness more compelling. The contrast is -- in the best possible way, here --  reminiscent of Frances McDormand never missing a beat while lugging a baby bump around in the original.

Probably the most important holdover from the source material is the pacing – which provides the best reason for sticking with this “Fargo” for a few more episodes. The show has been described as not so much a series but as a 10-hour movie. Earlier this year, “True Detective,” another true-crime serial, employed a similar descriptor; one could easily be cynical and think of it as publicity semantics. But if that evaluation is more true than not, and the original “Fargo” was only 98 minutes long, then this first episode is roughly equivalent to the first 10 minutes of the movie. While most may remember Frances McDormand’s Marge Gunderson as that movie’s star, she didn’t actually appear on camera until 33 minutes in.

Here, Colin Hanks, reportedly a key player, does not show up until the final minutes of the episode, in a scene that suddenly turns Thornton’s Malvo from a threatening caricature into an understated menace. Joey King as Hanks' daughter is introduced only as a sweet, disembodied voice over a police walkie underscoring a scene fraught with potential violence. It's the kind of thing we've seen before in many a Coen brothers film, yet it never fails to disturb. If the slow roll-out is any indication, there are far more interesting developments to come.