Irvine Welsh: You know when a writer's a drug user

The author on "Trainspotting's" long-awaited prequel, what makes good drug lit and the forthcoming film "Filth" 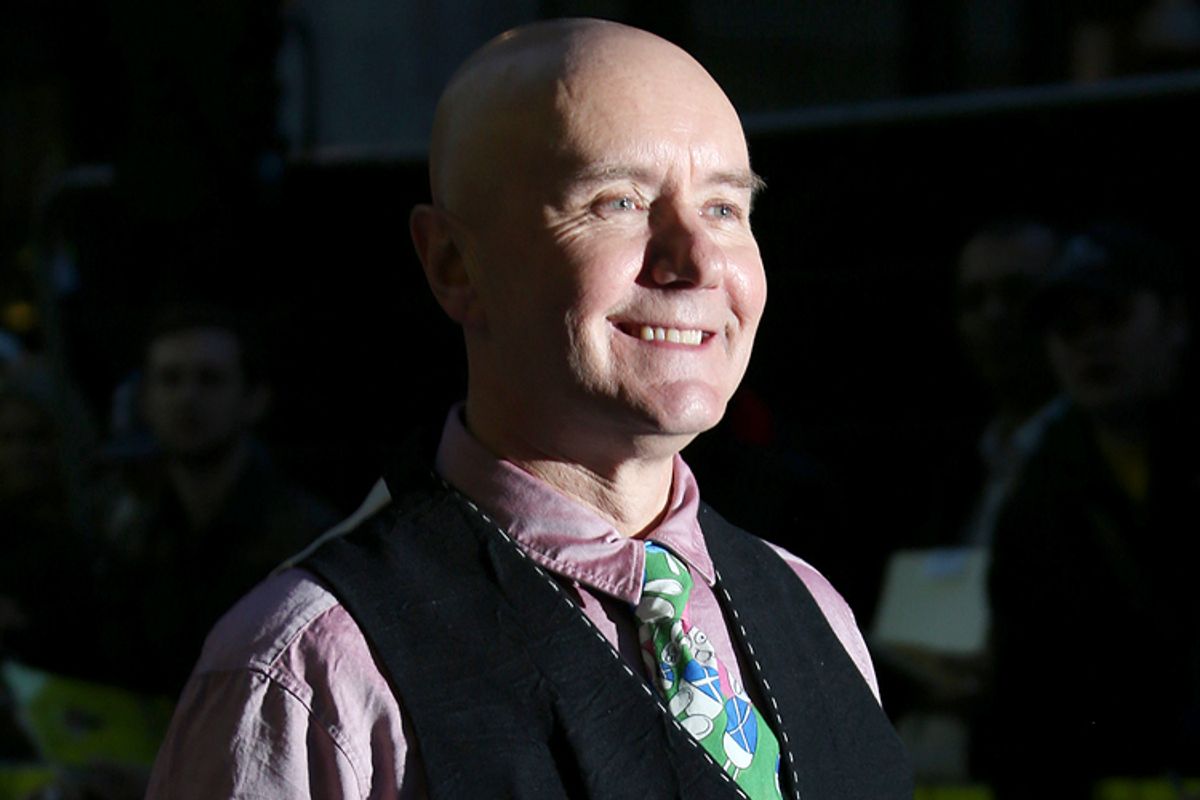 It’s 1 am, we’ve been kicked out of the Jesus and Mary Chain show and Irving Place is choked with gawkers and drunks, scalpers and psychos and other “after-dark” types. A wild-haired Russian “action painter,” an associate of Pussy Riot, is shoving something into my hands, jabbering excitedly. It resembles a bale of hay, but on closer inspection turns out to be a few ounces of pungent weed. A camera flash throws the image into sharp relief as a tourist snaps incriminating pictures. “Take it, take it,” the artist insists. “There’s plenty more where that came from!”

I glance around and Scotland’s favorite literary son is deep in conversation with another Russian, eliciting laughter—even though I’m pretty sure the guy can’t understand a word of his Leith brogue. The unfortunate truth is—on this side of the Atlantic, at least—this voice-of-a-generation needs subtitles.

Welcome to his world, kiddies, and hold on tight. When you’re out on the pish with Irvine Welsh, things just…happen.

Before this chaos, we were at the Union Square reading in support of Skagboys, the long anticipated prequel to Welsh’s 1993 novel-slash-cultural phenomenon, Trainspotting. A literary superstar in Europe, Welsh is one of those rare writers that people outside of literary circles recognize. Even more rarely, this status was earned solely off the back of his writing. For most writers in a non-reading world, it takes something else—usually the frisson of scandal—to endow this kind of cultural profile. James Frey versus Oprah. Will Self, busted shooting smack on the Prime Minister’s plane. Hell, Salman Rushdie had to get fatwa’d to earn the kind of name recognition that Welsh got just by writing.

Irvine was in town not only to pimp Skagboys, but to promote Filth—the latest film adaptation of his work and the one that seems most likely to earn Trainspotting-like levels of fan devotion. Equal parts A Clockwork Orange and The Bad Lieutenant, Filth is a pitch-black comedy, boasting the twin guns of director Jon S. Baird’s fantastic script and a career-defining performance by James McAvoy. The actor’s sweaty, manic and unglamorous interpretation of dirty cop Bruce Robertson lets the viewer hate and pity him in roughly equal measure. After racking up impressive reviews and box office takings, Filth will be released on DVD in the US next month.

As our cab speeds through the neon lights, I ask Irvine how Filth compared to his other book-to-film experiences. “They’re all a pain,” he sighs. “Every one I’ve done has been a pain to get made.” I express surprise, considering Trainspotting’s runaway success. Aren’t people tripping over themselves to rush the rest of his canon to the big screen? He seems amused by my naivety.

“It usually takes about five years from starting,” says Welsh. “With Filth I lost five years because of a contractual dispute when it went away to a Hollywood studio. It was put into limbo, basically. The next five years was all about getting different directors involved and it was tough, because the heat had gone out of the project. A lot of directors want to do their own screenplay, and if you’ve got a director who’s a fucking shit writer… I mean, some of the screenplays we saw, you couldn’t get any acting talent in based on them—you couldn’t even finance the movie, it just wouldn’t be done. Then I met this guy, Jon [S. Baird], who just had a great game plan for it. He came back with a screenplay and it was excellent.”

While Welsh’s books spill over with extreme sex, violence and drug use, his private life remains resolutely private. Despite having written arguably the defining heroin novel, he never felt the need to play up his own history and adopt the whole “junkie writer” persona. However, it’s no secret that Welsh has history with heroin. For fans, this is a part of his myth: If tonight is anything to go by, it seems that whenever Irvine is recognized, people are determined to get him fucked up.

At our first bar, a group of lit students spot him and nervously approach with a glass of Scotch, like devotees of some Catholic saint laying an offering at the feet of a statue. Once he determines that they at least had the sense to order a good Scotch, Welsh drinks it straight, and spends a while graciously chatting and listening.

Later, the pair of Russians stick with us for the rest of the night, rolling joint after joint, which we happily smoke. Welsh confirms to me that he did indeed use heroin—but as a former user myself, I already knew, I tell him: Trainspotting is so obviously the voice of experience talking, not some surface-skimming drug tourist’s travelogue.

“Aye well…” Irvine concurs, “writing about drugs is like that though, isn’t it? It’s not like when an author writes about being a soldier, or a window cleaner or what have you. You can just tell when someone is writing about drugs and they’ve never really done them. It screams out at you. That’s something where I believe you have to have been there to really get it, y’know?”

It’s almost impossible to overstate the cultural impact of Trainspotting, his astonishing novel about the lives of a rag-tag group of junkie scroungers in post-Thatcherite Britain. Everything about it, from the phonetic Leith-ese it was written in to the stark depiction of Britain’s drug culture, seemed fresh and original—the literary equivalent of turning on the radio in 1976 to hear Johnny Rotten snarling, “God save the Queen…the fascist regime!”

When Trainspotting hit, I was still living in the small, working class town in the North West of England where I was born. The lads I hung out with—tough kids who planned nights out by pooling enough money to buy a six-pack of Tennents Super, a few grams of amphetamine sulfate, and maybe a tube of airplane glue, kids who would have laughed in your face if you suggested reading a book—were suddenly inseparable from their dog-eared copies of Trainspotting. It was a neat trick, and one that school never managed.

Here in the US, which is probably even less of a reading culture, the “poet laureate of the chemical generation” remains a harder sell. The twin quirks of his uncompromisingly Scottish narrative voice and his fascination with what some call “the underclass,” mean that in aspirational America, he remains a writer for those in the know.

“America’s always quite a difficult market,” Irvine says when I broach this disparity. “It’s very, very conservative. Complete contrast with places like Italy and Spain, where they’re a lot more receptive to stuff that’s way out there.” Europe, where “difficult” writers like Burroughs, Bukowski or Selby are revered, certainly differs from here, where we prefer depictions of social deprivation to demonize or patronize. Still, in hip urban centers like NYC, Welsh is fêted—as evidenced by the capacity crowd that arrives to hear him read from Skagboys.

Stateside, the “king-of-the-cults” crown sits with local boys like Chuck Pahlunuck, who favor the comedic gross-out over genuine transgression. Post Fight Club, Pahlunuck has carved out a successful career in alt-lit, but for all his excesses—the gang bangs, the faces beaten to pulp—his writing rarely make us genuinely uncomfortable. Welsh—like Dennis Copper, Lydia Lunch and Dan Fante—swims in darker waters altogether. There’s a palpable sense of threat to characters like Trainspotting’s Begbie, or Roy Strang of Maribu Stork Nightmares (1996).

The impact of Trainspotting might have finished a lesser writer off, but Welsh has worked relentlessly to broaden his scope, introducing elements of comedy, fantasy, crime and even parable to his work. So it’s a shame that in the wider US, his more recent work remains less known: His later novels contain some of his strongest writing.

Irvine laughs at these different perceptions in different cultures: “It’s the same with the films. We did The Acid House and it was quite successful…a small kind of low-budget movie, played on one or two multiplexes, art-house cinemas, had a loyal audience, did well on DVD.” I thought it was a great movie, I tell him. One of the most loyal adaptations of his work, though sadly never destined to be a blockbuster—the proliferation of thick Edinburgh accents and relentlessly dark subject matter saw to that.

“Aye, it was grungy as fuck, like. It was after Trainspotting and we just thought, push the envelope out further, make it really grungy and nasty. It was too grungy really to be a proper cinematic experience. Usually you’re always compromising, always trying to make people look better and make it look a bit slicker and make the dialogue a bit pared down and more accessible. But with The Acid House they just went for it and it was a really ballsy thing to do. It really worked—it was successful on its own terms, y’know? It was never intended to be a big multiplex family popcorn movie.”

But despite this, I may have to rethink that “no blockbuster” thing.

“Yeah, it was a cult thing everywhere,” Irvine continues, “…except Australia, where it was a fucking smash. The people who bought it, Icon, they liked it and decided they were going to give it the high treatment. I remember hearing two of the biggest grossing movies of all time out there were Star Trek: The Wrath of Khan and The Acid House. This happened nowhere else in the world, but in Australia it went mental. It’s bizarre. When I do book tours everywhere else, it’s all about Trainspotting, you know? But in Australia it’s like [he adopts a passable Aussie accent] ‘The Acid House, mate—great film!’”