Day one of the deep-sea search, using the autonomous underwater vehicle Bluefin-21, was cut abruptly short 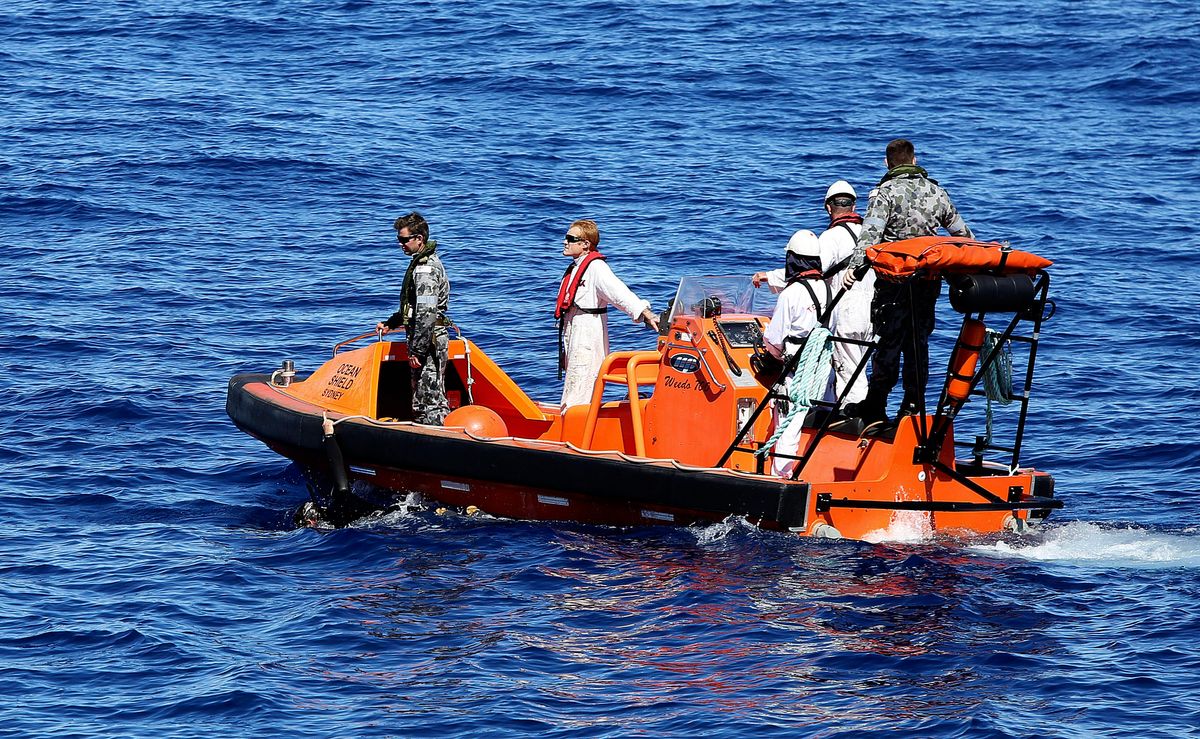 In this April 7, 2014 photo provided by the Australian Defence Force a fast response craft manned by members from the Australian Defence's ship Ocean Shield tows Able Seaman Clearance Diver Michael Arnold as they scan the water for debris of the missing Malaysia Airlines Flight MH370 in the southern Indian Ocean. Up to 14 planes and as many ships were focusing on a single search area covering 77, 580 square kilometers (29,954 square miles) of ocean, 2,270 kilometers (1,400 miles) northwest of the Australian west coast city of Perth, Australia. (AP Photo/ADF, LSIS Bradley Darvill) EDITORIAL USE ONLY (Lsis Bradley Darvill)
--

The search for Malaysia Airlines Flight MH370 hit another hurdle on Monday. The unexpected depth of the search area caused the autonomous underwater vehicle to turn back after only six hours of scanning the ocean floor.

Previously, searchers had been using a "pinger" detector towed by the Australian ship Ocean Shield to pick up potential signals from the plane's black box. The black box has two recorders, each equipped with a beacon that activates upon contact with water and gives off a "ping" at 37.5 kilohertz. Four "pings" consistent with a black box recorder were detected a week ago.

Yet after a week of silence from what officials were "confident" was the black box, investigators worried that the beacons' battery-life of 30 days had run out. Thus with the information they had from the previous four pings, the deep-ocean search for wreckage from the missing plane commenced.

On Monday, a crew aboard the Australian ship Ocean Shield lowered the U.S. Navy's Bluefin-21 into the Indian Ocean. The mission was supposed to last 24 hours: two hours to get to the bottom of the search area, 16 to search the 15-square-mile section, two to resurface, and then four to download information from the search.

However, the mission came up short. After only six hours of searching, the Bluefin-21 hit a patch deeper than the 2.8 miles it can withstand, its emergency setting kicked in and it headed to the surface. The Bluefin-21 was unharmed and search teams are going to attempt to send the AUV down tomorrow.

The Los Angeles Times put the 2.8 miles into perspective: "The depth at which the Bluefin-21 will work — 2.8 miles — is hard even for oceanographers to fathom: That's as deep as Mt. Whitney is tall." The Washington Post illustrates it here.

The Bluefin-21 travels 150 feet above the sea floor and uses sonar to detect objects of interest. "The Autonomous Underwater Vehicle in sight scan sonar mode transmits an active pulse which produces a high resolution, three dimensional map of the sea floor," explained retired Air Chief Marshal Angus Houston, who is leading the joint search. If anything is detected it can switch into camera mode. Hovering only 15 feet above the sea floor it can capture images of any possible debris.

Daily, it will be sent down to cover small swaths of the Los Angeles-size search area, which is located roughly 1,400 miles from Perth, Australia. This process could take six times longer than it took the Ocean Shield to cover the same distance.

Malaysia Airlines Flight MH370 went missing on March 8 during a routine flight from Kuala Lumpur to Beijing. The plane, which was carrying 227 passengers and 12 crew members, deviated off its course and according to officials and advanced satellite data ended in the Indian Ocean. No physical evidence has been located, though the search for floating debris continues. According to the Joint Agency Coordination Center, 11 aircraft and 11 ships took part in the day's search.