“You’re leaving? Are you effing kidding?” An anti-gay bigot gets humiliated

Peter LaBarbera came to my college to "expose" the "gay agenda." He wasn't expecting what would happen instead 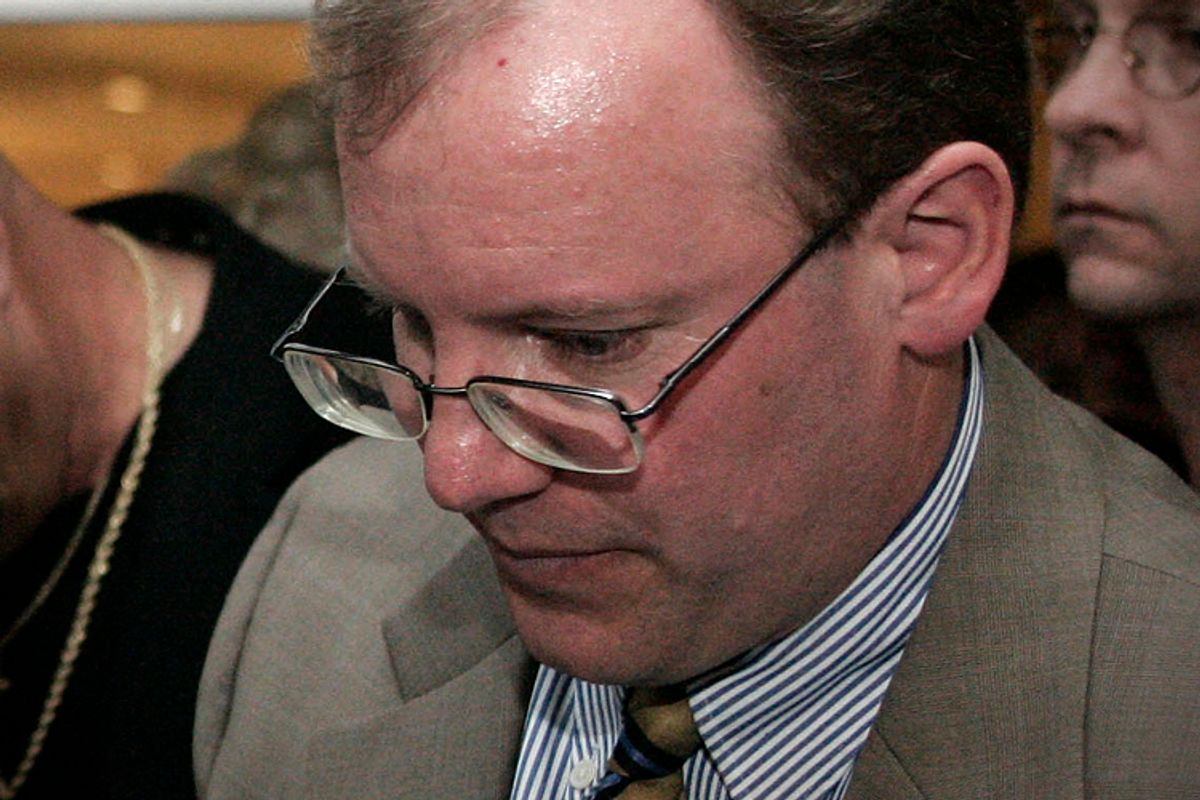 EDITOR’S NOTE: In a message sent through an attorney, Mr. LaBarbera denies saying “You’re leaving? Are you effing kidding?” However, in postings on his websites, he admits using the word “effing” in describing a statement he attributes to one of the students who walked out on his talk. A video of the speech posted on LaBarbera’s website is inconclusive, and Salon's sources stand by their account. Mr. LaBarbera also suggests that the word effing was used by Kate Geiselman as “substituting for the F-word.” But Ms. Geiselman simply quoted Mr. LaBarbera as using the word “effing.” Neither Salon nor Ms. Geiselman intended to imply anything else.

When Peter LaBarbera saw that close to a hundred people had assembled at my college to hear his warning about "the gay agenda," I’m sure he was thrilled. He is the president of a group called Americans for Truth About Homosexuality, which describes its mission as being "dedicated to exposing the homosexual-bisexual-transgender activist agendas."

When, less than 10 minutes later, he was left with an audience of about a dozen, he was angry. Angry enough to say, as the masses marched out, “You’re leaving? Are you effing kidding?” Angry enough to tweet, later that evening, “Two liberal professors lead their students in a walkout of my talk ... rather than allow them to hear an opposing viewpoint.”

Except that’s not exactly what happened. What happened was much bigger than that, but I should back up a bit.

A couple of years ago, they invited a guest speaker with spurious credentials to explain to students that homosexuality can be cured. These organizations cloak their hate speech with phrases like “Religious Freedom” and pretend to want a dialogue, but we all know better. They stick to their talking points, cite junk science, and name-drop God at every opportunity. Dialogue it is not.

So when word got out that this club was hosting yet another guest whose sole purpose is to deprive individuals of their rights under the guise of “freedom,” one concerned student emailed a couple of his professors. They emailed a couple of others, who told a few of their students, and so on. Together, via email and Facebook and conversation, we decided that the best response was to meet Peter LaBarbera with silence, and then drown him out with a celebration of our own.

We baked cookies, blew up balloons, set up some tables, gathered quotes about love, and then went to see what Mr. LaBarbera had to say. We planned ahead of time that when the hate speech began, we would all leave together and go to our own party.

But things didn’t quite go as planned. Mr. LaBarbera, we were told, was not there.

Immediately, I suspected him of cowardice. I suspected the club advisers of deliberately manipulating the schedule so students with busy lives, professors with classes to teach, and staff with jobs to get back to would not be able to wait.

But wait we did, and despite my initial paranoia, it appeared that Mr. LaBarbera was legitimately delayed. In fact, one of the club advisers not only asked the assembled guests to stay, but invited us to the mic to explain (“respectfully, and please keep your comments to under one minute”) why we were there.

At first, no one spoke. Then a young woman stood, took the mic offered to her, introduced herself, and said, “I’m here because most of my friends are gay, and I love them with all my heart.” She sat down amid enthusiastic applause.

And then the magic happened.

For the next 40 minutes or so, students and faculty and guests passed the mic to one another and spoke plain truths about their lives and loves. They expressed frustrations and hopes. They professed faith and doubt. Some identified themselves as gay or straight; many did not. Some identified themselves as Christians, others as atheists or Buddhists or agnostics. One man said he moved here from a country where homosexuality was punishable by hanging. Another said that after a history of drug use and time in prison, he had found Christ, and that studying theology in college had deepened his faith and opened his mind. Just before we ran out of time, a woman stood up and said, “I’m a lesbian. After this, I have some work to do,  and then I have to get to the grocery store, and then I will have dinner with my partner, and then we will walk the dogs. That is my gay agenda.”

The TVC adviser took the mic and thanked the crowd for their comments. He took a few seconds to remind us that no one should have to bake a cake for a wedding they disapprove of or provide adoption services to a gay couple ... but never mind, the speaker had arrived.

Mr. LaBarbera approached the podium and apologized affably for keeping us waiting. He talked about the importance of dialogue and respect. And then he said there was no scientific evidence that homosexuality is not a choice. He reminded us that the hypocritical left, in silencing voices like his, is really the party guilty of intolerance.

And that was our cue to leave.

We stood, without a word, and walked out. I heard a woman shouting, “Shame! Shame on you!” There were gasps and a few loud grumbles of disapproval, LaBarbera’s aforementioned “Are you effing kidding me” among them. We walked out of the venue and into the Student Activities Center, where we hugged and laughed and ate Honey Maid graham crackers. Photographs of the venue after we walked out show that about 12 people remained behind, at least two of whom I recognize as allies who likely stayed to see what he would say. It was a beautiful, beautiful thing.

It has been a source of both professional and personal pain to see the institution I am proud of and students I care about hijacked by this tiny minority. There is widespread concern about this club at all levels of the college. Over the years, many groups and individuals have tried to engage the TVC and LaBarbera’s ilk in the “dialogue” they profess to seek, but there are big organizations behind these speakers. They have deep pockets and lots of lawyers, and they are looking for a fight. As an institution, we have a duty to protect free speech, hateful or not.

But we don’t have to listen to it.

Peter LaBarbera can, as is his habit, twist facts into distortions and say that students walked out because two liberal professors didn’t want them to hear his message. The truth is this: Dozens of people, of their own volition and for myriad reasons, showed him that the tide has turned. It’s just a matter of time. Love will always win. Gay or not, our agenda included graham crackers, and they weren’t going to eat themselves.