In comic to be published this June, Sandberg is the superwoman of leaning in 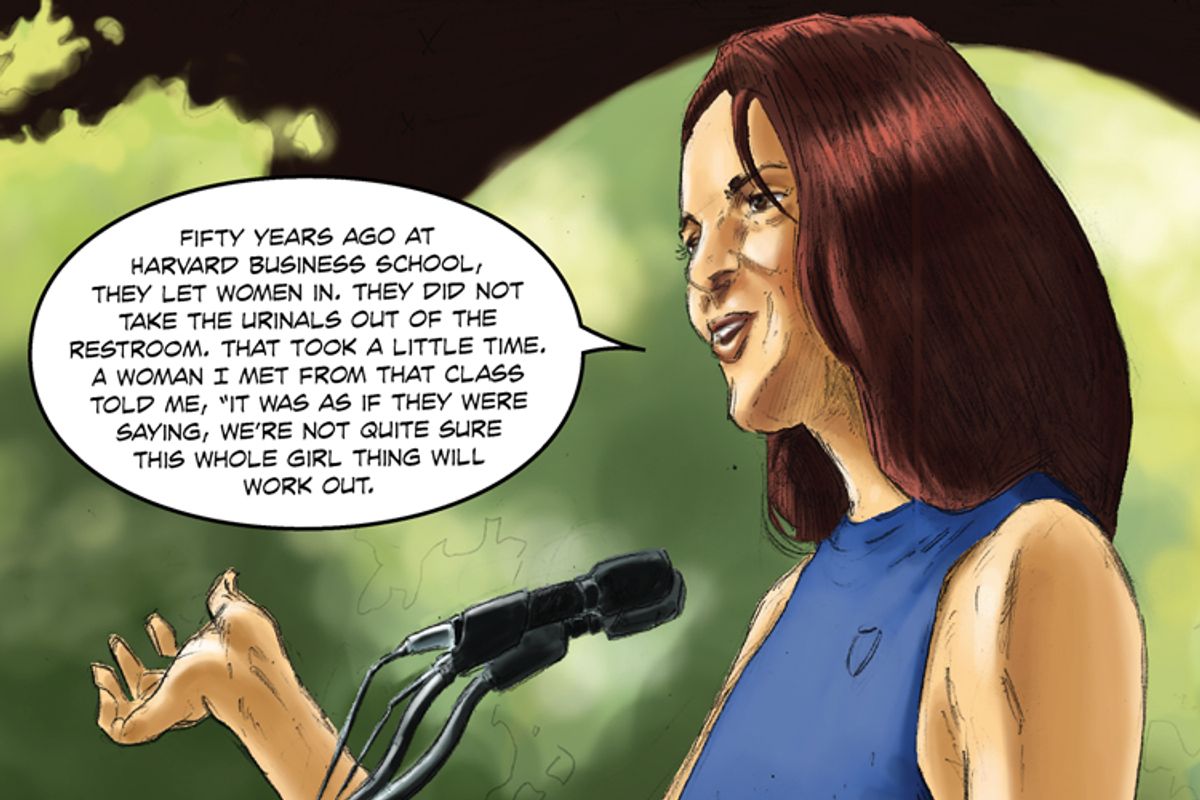 The comic book "Female Force: Sheryl Sandberg" -- set for a June release from Bluewater Productions -- is pretty much what it sounds like: a superhero story about Sheryl Sandberg's life. After all, being the COO of Facebook and author of "Lean In" is almost like having superpowers, if said superpowers include unparalleled expertise in management consulting and superior public speaking skills. The 22-page comic follows Sandberg from her anxious beginnings at Harvard to the hallowed grounds of Silicon Valley and her eventual authorship of well-intentioned if narrowly applicable self-help books.

The illustrated Sandberg is featured along with other "Female Force" series heroines Michelle Obama, Hillary Clinton and Justice Sonia Sotomayor. (Also: Barbie.) It may be the perfect book for those who don't have the time or inclination to read "Lean In," but still want to get into fights with friends and family about what Sandberg means for feminism.

Salon got an exclusive look at the comic.

Sandberg finds herself at Harvard with a serious case of impostor syndrome: Sandberg's mother relieves her of her impostor syndrome by telling her she loves her and that it is OK to cry. (This is true and good advice.) Her dad looks skyward and contemplates the unknown: Sandberg studies; does some skyward-gazing of her own, contemplates gendered double standards: Sandberg returns to Harvard in triumph, tells women to "lean in" and sparks a million think pieces: So who is the audience for this comic book? Perhaps the high school student in your life who is obliged to write a paper on a "woman of note," but who, like certain New York Times columnists, did not read "Lean In." (Also serves as a possible substitute for perennial "inspirational," but less woman-centric, graduation gift, "Oh, the Places You'll Go!")

Prediction: "Female Force" will make you feel more of the feelings you already feel about Sandberg. That said, it's hard not to see this as a missed opportunity to make this an actual superhero story and have Sandberg face off against the Princeton Mom -- who, if you really think about it, is totally the Venom to Sandberg's Spider(wo)man within the world of elite women doling out advice to other elite women.

Someone should maybe get on that. I'd read that.