Author of infamous memo authorizing torture is back with more obnoxious opinions. Can't these guys finally go away? 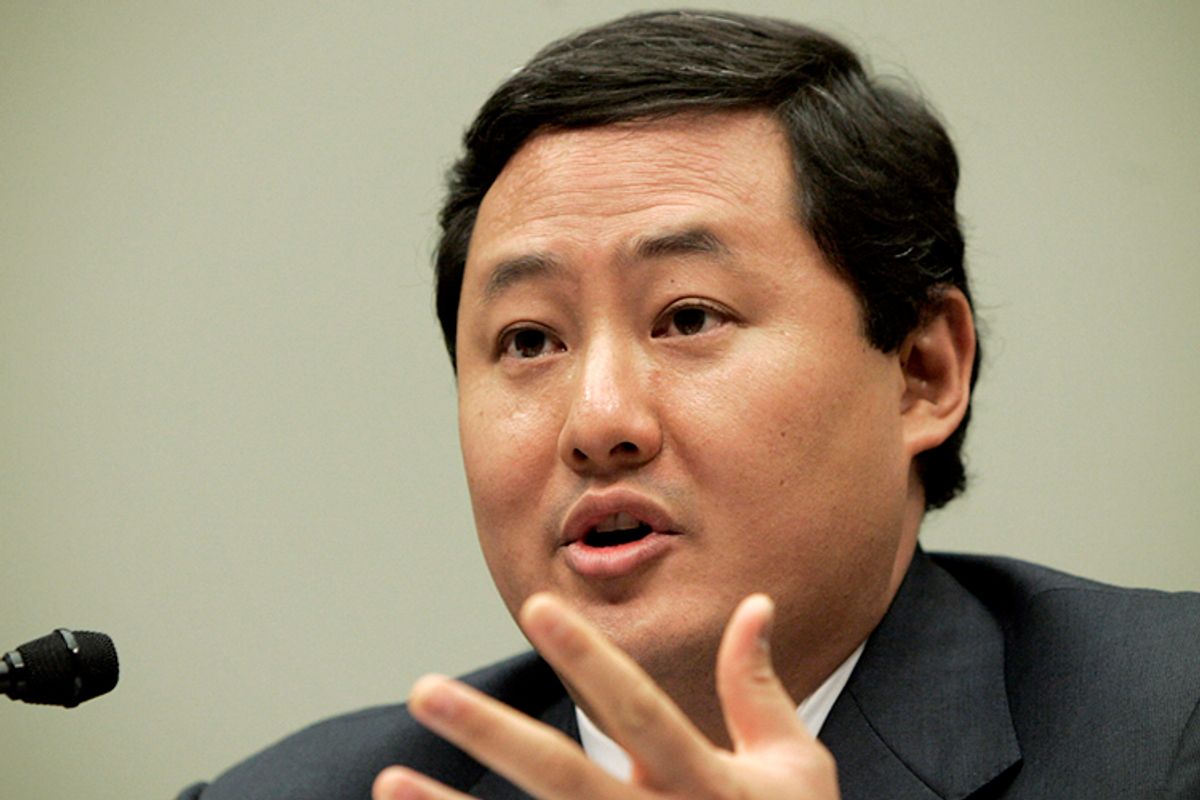 How depraved and incompetent do you have to be before people in America stop asking your opinion about things? Former Bush administration Department of Justice official John Yoo – the man who famously butchered the U.S. Constitution in order to give the CIA the legal authority to conduct medieval torture -- this week decided to chime in with his opinion on the Pulitzer Prize being awarded to the publications that reported the Edward Snowden leaks. Unsurprisingly, he was not too thrilled about the decision:

“I’m not surprised the Pulitzer committee gave The Washington Post a prize for pursuing a sensationalist story, even when the story is a disaster for its own country….I don’t think we need automatically read the prize as a vindication for Snowden’s crimes. Awarding a prize to a newspaper that covered a hurricane does not somehow vindicate the hurricane, [and] awarding a Pulitzer for a photo of a murder does not somehow vindicate the crime.”

His statement is problematic for a few reasons. First, Yoo appears to have brought the same deft reasoning powers with which he argued it was legally justifiable to crush a child’s testicles to his very bizarre analysis of this event. The papers were not – as he apparently failed to grasp before commenting – awarded the Pulitzer for their reporting on Snowden’s “crimes” but rather for their reporting on the NSA’s surveillance programs. That was entirely what the award was for, as anyone who bothered looking at the Pulitzer committee statement could plainly see. It’s true that acts are not made justified simply by being reported in the news, but the only party to which that would be applicable in this situation is the NSA – not Snowden. And so, tragically, Yoo’s elaborate analogies about hurricane vindication are slightly undermined by the fact that they happen to make no fucking sense.

But a more important question to ask here is, why are people asking John Yoo’s opinion about things? In what universe does it seem appropriate to seek out a man whose actions resulted in the grievous torture and deaths of innumerable people and ask him to weigh in on the news of the day? John Yoo almost single-handedly shredded the U.S. Constitution – to say nothing of what he helped do to America’s moral standing in the world – and yet major news outlets and even universities continue to regularly seek out his advice as though he isn’t an incompetent reprobate of biblical proportions. Worse than that, he’s the monstrous figure who knowingly enabled the most unconscionable war crimes of the global war on terror. In any sane or just society, Yoo would be rotting in a prison cell instead of wearing tailored suits and sharing his opinions in polite company.

But, alas, America as it stands today is somewhat wanting in the departments of both sanity and justice. While powerful ghouls such as Yoo completely escape legal consequences for their actions – no matter how morally despicable and disastrous for the country they were – ordinary Americans somehow continue to regularly land in jail for the slightest transgressions. In fact, Yoo is not only not in jail, he’s still somehow a media figure regularly weighing in on the issues of the day. Legal accountability for his moral failures aside, he hasn’t even really paid a career price for the monumental incompetence he displayed in his work.

To be fair, Yoo isn’t the only one in this situation who is taking advantage of the consequence-free world of the rich and politically connected. His fellow Iraq War criminals Karl Rove, Dick Cheney and Donald Rumsfeld can all still be seen in the news being regularly solicited for their commentary on various matters. They’re the people who helped kill, wound and displace millions of innocent Iraqis, tens of thousands of American servicemen, and whose collective mismanagement helped turned America into a giant smoldering wreckage by the time they exited government -- but somehow they are still apparently shameless enough to offer criticisms of other people's actions.

One can perhaps excuse these people for their lack of self-awareness. After all, they are part of the supremely insular universe of the wealthy and powerful where all criticism from the real world can comfortably be papered over. But why on earth do ostensibly reputable news organizations continue to seek out people like this – individuals who should rightly be awaiting their arraignments at The Hague – for quotations and analysis on current events? Doing so is as inexplicable as asking Ted Kaczynski for his opinion on the 2016 presidential race, or calling up Ratko Mladić to ask what he thinks of the Mets' chances this year.

But perhaps the best example of America’s ironclad career security for the powerful is former Bush speechwriter David Frum. Never mind that the childishly facile “Axis of Evil” quote that became his trademark helped trigger a proxy war with Iran that destroyed America’s imperial projects in both Iraq and Afghanistan, and never mind his own fantastical delusions that the Iraq War would not only be a glorious triumph but would also end up revealing: “the flow of money from Iraq to ... French and German corporations [and] senior political figures.”

His spectacular moral and professional failures have somehow not harmed Frum one bit. Far from jail or even obscurity, he’s still a voice in our national conversation. Indeed, America’s very own Baghdad Bob has remained on the airwaves consistently no matter how malevolent or criminally incompetent he’s been. Just this past month, on the 11th anniversary of the war he helped start, Frum was named the senior editor of the Atlantic magazine. Yet another example of America’s broken meritocracy; career security for no one except war criminals and Wall Street raiders.

It’s time to stop this. The perversity of continuing to refer for “expert” opinion to people who not only have consistent track records of failure but actual blood on their hands cannot continue if America is to have a healthy, sane and productive public discourse. No one should care what John Yoo thinks about the Pulitzer Prize, just like no one would’ve cared what Eichmann thought about the Bay of Pigs invasion or the civil rights movement or "Breakfast at Tiffany’s." People like Yoo and his coterie of Iraq War perpetrators belong in prison cells, not the pages of major newsmagazines or the lecterns of universities. While we as a society may lack the power to bring these individuals to justice, the least we can do is stop giving their noxious views public airtime.