The search for the missing plane enters day 40, and investigators think with the Bluefin-21 it could take 60 more 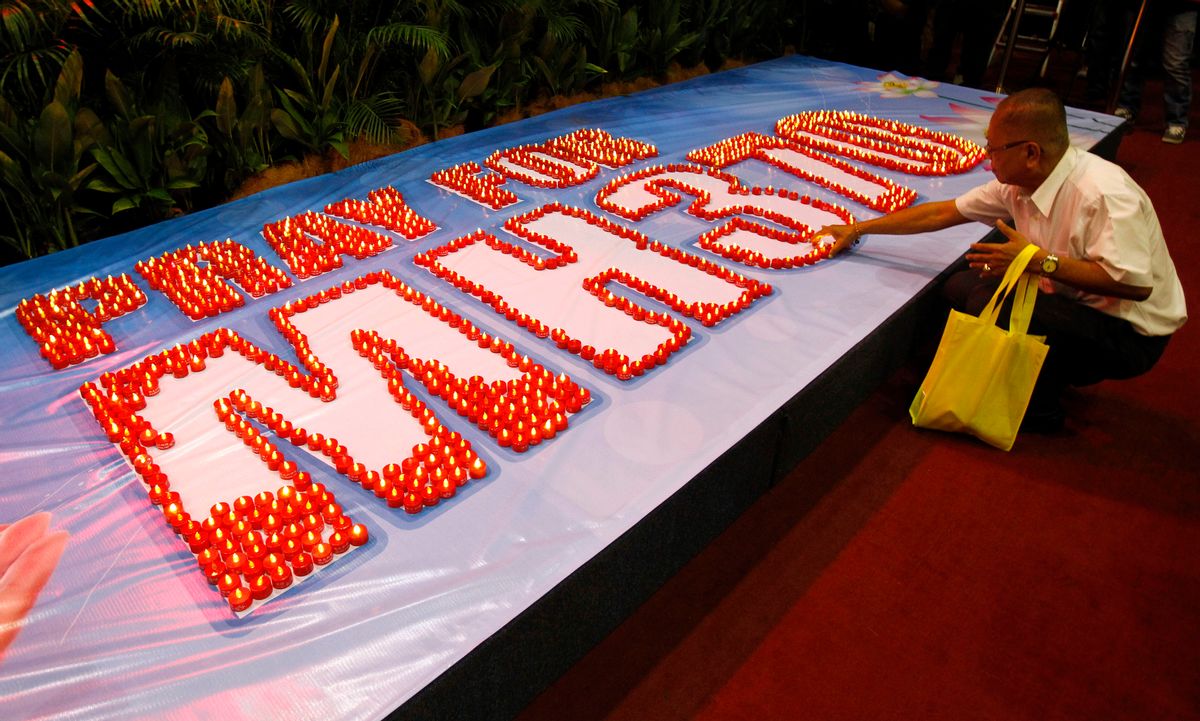 A man places a LED candle after a mass prayer for the missing Malaysia Airlines Flight MH370, in Kuala Lumpur, Malaysia, Sunday, April 6, 2014. The head of the multinational search for the missing Malaysia airlines jet says that electronic pulses reportedly picked up by a Chinese ship are an encouraging sign but stresses they are not yet verified. (AP Photo/Lai Seng Sin) (Lai Seng Sin)
--

The deep-sea search for missing Malaysia Airlines Flight MH370 was cut short again due to technical issues. This is the second day that the Bluefin-21, the U.S. Navy autonomous underwater vehicle, was forced to resurface before completing its search of the Indian Ocean sea floor. According to the Joint Agency Coordination Center, the submarine was redeployed post-technical glitch and is currently underwater.

Yesterday, the AUV encountered depths beyond its 2.8 mile range, sending it back to the surface after only six hours of scouring the ocean floor for wreckage from the missing plane. The six hours of data collected were downloaded and analyzed; nothing of note was found.

The Bluefin-21 hovers 150 feet above the ocean floor and uses side-scan sonar to create a high resolution 3-D map of the area. If it detects something of interest, the AUV can switch to camera mode and pick up visuals. Each mission can take around 24 hours. Two hours are spent diving to the bottom of the sea, 16 hours searching, two hours resurfacing and then four hours to download the retrieved data.

The search is taking place on the Zenith Plateau, which according to CBC News has never been mapped before. Reuters reported that according to marine geologist Robin Beaman of James Cook University, the sea floor is likely covered by a sludge made of microscopic organisms called "foraminiferal ooze."

The search area, located roughly 1,400 miles from Perth, was narrowed after four "pings" consistent with black box signals were detected by the Australian ship Ocean Shield last week. The area is about the size of the city of Los Angeles, and -- technical issues notwithstanding -- the Bluefin-21 will cover a 15-square-mile section of the search area per-mission.

According to CBC News, "U.S. Naval personnel have said the drone could take up to two months to comb through a 600-square-kilometre area where the plane is believed to have sunk." The process will take six times longer than the Ocean Shield towing a U.S. Navy black box detector.

Thus far, no physical evidence has been found from the missing flight. The plane's black box could help investigators determine why Flight MH370 diverted from its flight plan and ended in the Indian Ocean. It has both a data and voice recorder, each furnished with a beacon when it makes contact with water. The beacons' 30-day battery life has worn down, rendering black box-detecting technology useless. Currently, all hopes are being pinned on the eventual success of Bluefin-21.

The Boeing 777 and 239 people on board have been missing since March 8. The Malaysia Airlines plane was barely into a routine flight from Kuala Lumpur to Beijing, when transponders went dead and the plane diverted its flight path.

Along with the deep-ocean underwater hunt, the search team is also scanning the area for floating debris. "Up to 11 military aircraft, three civil aircraft and 11 ships will assist in today's search for missing Malaysia Airlines flight MH370," according to Australia's Joint Agency Coordination Center. The search, which is now in its 40th day, is the most expensive in history, according to the joint search leader retired Air Chief Marshal Angus Houston.