NBC's "Parenthood" should loosen up its family values 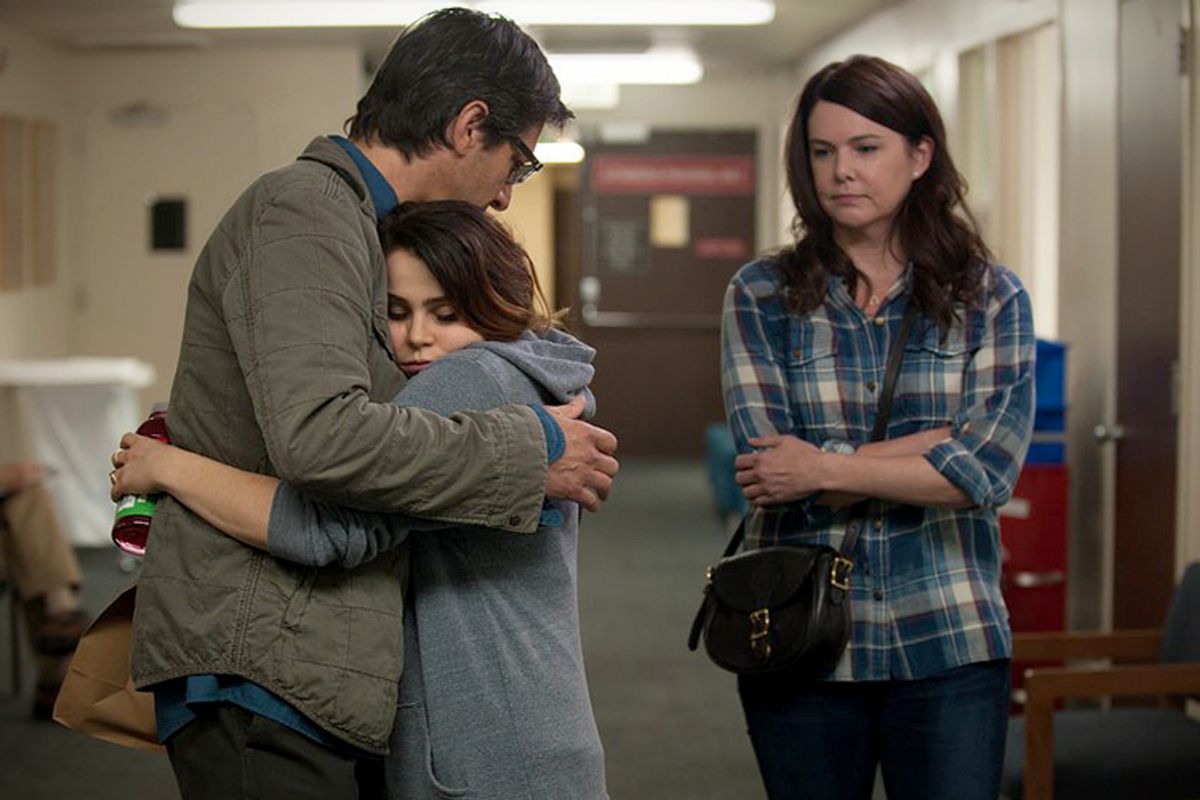 Watching “Parenthood” can be quite the melancholy viewing experience. Since it premiered, Adam and Kristina Braverman have wrestled with their son Max’s frustrating and often alienating Asperger’s syndrome. Mostly aimless Sarah Braverman has struggled to raise two teenagers on her own. This past season, Adam and Sarah’s younger sister Julia split with her husband, Joel, over a fling, tearing their seemingly perfect family apart. Their brother Crosby found mold in his home and was forced to move his little brood back in with their parents. Or take last week's episode, the penultimate of the season: A family friend died of cancer and a young man, already suffering from PTSD, returned home from a self-imposed tour of duty severely injured. It’s pretty dark stuff on the surface. But if you pay attention to the way “Parenthood” chooses to reconcile these troubles, you’ll realize the show may express one of the rosiest worldviews on television – provided you understand its core values.

Whether the hurdle is divorce, illness, economic hardship or something else, "Parenthood" takes a profoundly traditional – one might even say, conservative – approach to coping with hardship. Within the Braverman microcosm, all is surmountable with the aid of family. For instance, after being held financially hostage by contractors all season, Crosby finally enlists his in-law Joel to help patch up his damaged hardwood floors post-mold. (Joel, conveniently, is a contractor.)  At first, Joel, busy with his own work and soul-searching over his separation, resents the imposition. He relents after a colleague – one who happens to be interested in him romantically – somewhat disappointedly identifies him as a “family man” at heart. In addition to helping Crosby move back home, this collaboration has the added benefit of pushing Joel to an epiphany of sorts regarding his own fractured marriage. When last we saw him, he was at Julia’s doorstep, sowing the seeds of reconciliation.

Max Braverman’s life with Asperger’s syndrome has been the show's most consistently tumultuous plotline. But his significant troubles in school and his difficulty relating to most anyone have been greatly offset this season by an awkward friendship with kindred spirit Hank Rizzoli, played with Emmy Award-winning potential by Ray Romano. Hank’s photography studio has become something of a haven for Max (Max Burkholder), where Hank treats him more like a colleague than a special needs case. This it-takes-a-village perspective on parenting could be seen as progressive for “Parenthood,” except for that fact that Hank is, and has been since Romano’s arrival as a guest on the show, vying for the affection of Aunt Sarah.

Sarah (Lauren Graham) might represent “Parenthood’s” strongest argument for the healing effects of traditional family values. Since the show began, she has been divorced from the father of her two children. Her life has been portrayed as a never-ending stream of tossed-off careers and failed relationships. Her eldest child has struggled with alcohol, boys and acting out in the absence of a dad. (In the early seasons of the show, Mae Whitman’s character, Amber, was conspicuously contrasted with Adam and Kristina’s daughter Haddie, a mostly well-behaved, straight A student who was written off the show as attending a prestigious university across the country.) Where Amber is excitable and impulsive, her brother, Drew, is a sensitive and fragile doormat whose biggest story line thus far has involved getting a girl pregnant.

Also compare Sarah with the Bravermans’ youngest sibling, Crosby (Dax Shepard), once a hapless, irresponsible bachelor who was still bringing his laundry home to Mom throughout his 20s. Early on, he discovered that he had a school-age child from a brief tryst with a young black woman. Per the show’s title, his character arc has been a long road to accepting the responsibilities of fatherhood. Since marrying his lovechild’s mother, Jasmine, Crosby has become a cardigan-wearing, homeowning, successful businessman and father of two. Such are the immediate blessings of the committed family man.

Though Sarah and Hank were briefly involved, she has, of late, struggled with her attraction to him. On last week’s episode, something happened that is likely to change all of that. In addition to frequently taking care of Adam and Kristina’s kid, Hank stepped in to safeguard a panicking Amber all the way from Berkeley to San Diego to see her wounded veteran ex-fiancé. Upon arriving at the hospital, she witnessed Amber asleep on Hank’s arm and seemed to see him in an entirely new light. Previews of the season finale show Sarah rushing into Hank’s embrace and kissing him. This is not to say that the two will marry and finally grant Sarah the nuclear family bond that she so desperately needs, but such a development would certainly be in keeping with the show’s core concerns.

The Braverman clan is a Typical American Family in the sense that such a thing probably doesn’t really exist: Patriarch Zeke is a vet. His wife, Camille, is a devoted, stay-at-home mom/grandma who sometimes paints. Adam (Peter Krause), the eldest, is the good son and provider. His wife, Kristina, is a concerned mom and one-time mayoral candidate. Sure, Crosby has a black wife and a half-black kid. And Joel (Sam Jaegar) and Julia (Erika Christensen) adopted a poor Mexican boy from a broken home right before they broke their own home. But for the most part, these are white people. Rather than deploy the oft-used phrase “White People Problems,” I will only say that Adam and Kristina’s ultimate solution to Max’s education travails is to open their own charter school. Their most recent hiccup: Kristina had to suck it up, pay a visit to her old rival, the current mayor, and petition him for the right to lease the exact building she wants for her new school. That cancer victim I mentioned earlier? Her parting gift to Kristina (Monica Potter) was a sizable donation to the project.

“Parenthood” is about raising children, by hook or by crook. That is inarguably a compelling and highly relatable thing to make a show about. It is certainly one of the reasons that “Parenthood” is easily one of the most moving and enjoyable dramas on television today. But over the course of five seasons, the show has evinced a particularly staunch opinion about what exactly a strong family entails. That’s a little disappointing being that there are so many alternative permutations of family in this country. Going forward, it will be interesting to see whether the show’s writers feel that it is imperative that Joel and Julia get back together. Or can the two raise their two children separately? Also, will Sarah and Hank or Amber and her soldier finally make it, yunno, official?

And, oh, yes! Previews for the season finale show the good girl Haddie finally returning from school in the East – as a lesbian. How, I wonder, will that fit into the Braverman ideal?