"No Country for Old Fargo": The story behind FX's new adaptation of the classic movie

On the red carpet, the "Fargo" team talks TV-making and Billy Bob Thornton explains why he wants to be on "30 Rock" 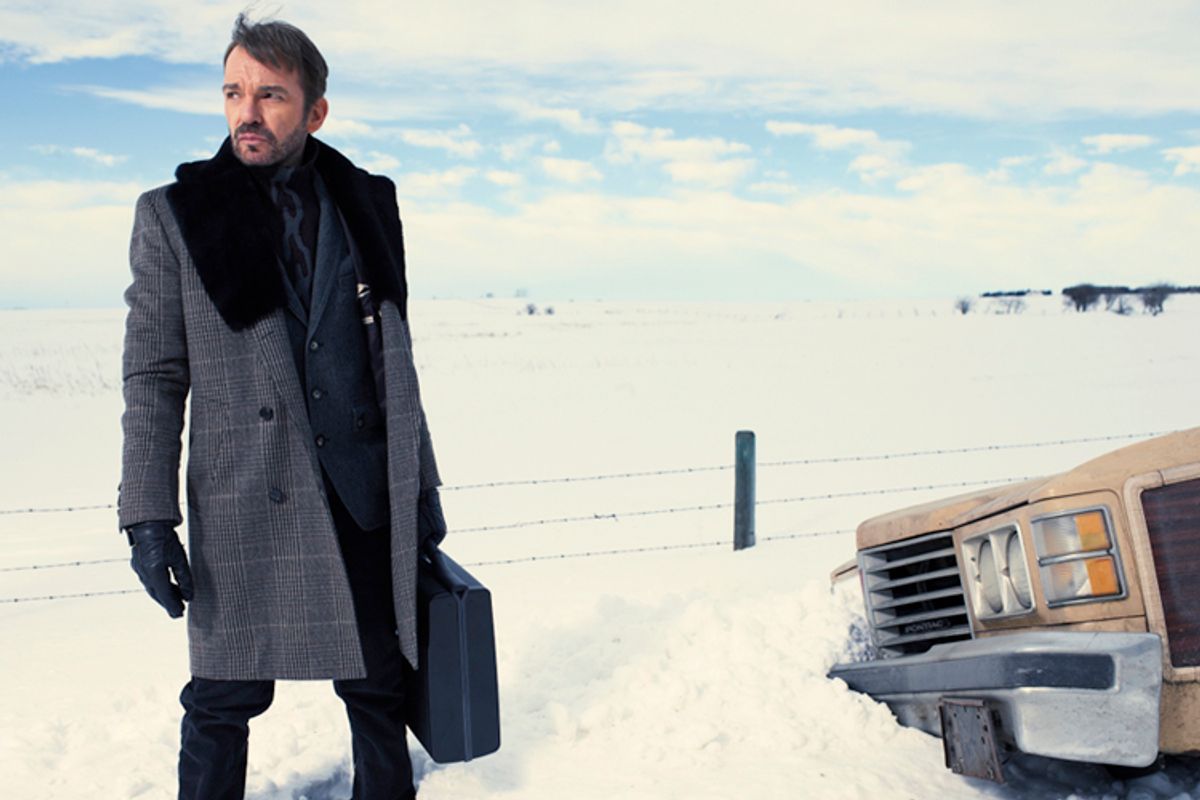 An awkwardly unceremonious ceremony unfolded Friday night at New York’s Paley Center for Media, where a small crowd gathered for a red carpet event celebrating the FX adaptation of “Fargo," which premiered Tuesday night. The paltry turnout included two journalists, a college-age intern, some teenage girls with iPhones, a few photographers and various heavily done-up P.R. professionals. Not unlike “Fargo,” which derives much of its humor from using a small town as a backdrop for big crime, the short carpet unfurled to welcome such luminaries as “The Hobbit” and “Sherlock” star Martin Freeman and Oscar-winning actor Billy Bob Thornton. But if the stars were underwhelmed by the turnout, they didn’t let on. (Thornton, in a black Beatwear suit and matching Beatwear boots from Liverpool, was dressed to the nines.)

Ever since the success of the Oscar-winning film “Fargo," it seems like MGM has been searching for a way to adapt Joel and Ethan Coen’s 1996 classic for television. MGM created a pilot in 2003, reprising the film’s characters without the Coen brothers’ involvement, but it didn’t get very far. The studio held on to the idea, though, and more than a decade later, approached “Bones” and “The Usuals” writer Noah Hawley with a different challenge: write a script based on “Fargo” without its main character, local police chief Marge Gunderson (Frances McDormand).

Faced with this “provocative question,” Hawley then went back to the original film to figure out "what made that movie that movie," he said at the panel discussion following the red carpet event. Hawley came back with a pilot featuring a cast of familiar -- but not identical -- oddball characters, involved in an entirely different crime in a snowy, rural Minnesota town, set 10 years later in 1996.

The pilot introduces Lester Nygaard (Freeman), a meek salesman modeled after William H. Macy’s character, Jerry, who is on the verge of a breakdown after enduring years of verbal abuse from his family and peers. One night, Nygaard crosses paths with Lorne Malvo (Thornton), a ruthless sociopath who entertains himself by testing the boundaries of everyone he encounters. The meeting sets off a chain of events that leads to a double homicide, putting the the sharp-witted Molly Solverson (Allison Tolman) on the case with her overly lax boss, Deputy Bill Oswalt (Bob Odenkirk). At the end of the episode, we meet officer Gus Grimly (Colin Hanks), who has his own ominous, life-altering run-in with Malvo.

The 68-page script caught the attention of the Coen brothers, who immediately signed on as executive producers but refrained from any creative involvement. “They are not big fans of imitation,” said fellow executive producer Warren Littlefield. But the world Hawley created was so familiar that the Coens had “an eerie feeling” while reading it. “That really got the ball rolling for us,” Littlefield said.

Like the movie, FX’s “Fargo” purports to be based on a true story, but is not. Hawley's inclusion of “stranger than fiction” details, however, allowed him to tell “a story in a new way,” he said. Part of that “new way” is literal: The series is a 10-episode anthology that stands alone, making “Fargo” more of a 10-hour movie than a television show. “We didn't have to stick to any of the rules for a TV show, because [the Coen brothers] didn't stick to any of the rules for a movie,” said Hawley.

The characters in Hawley’s “Fargo” are darker and deeper, and the comedy is more grounded. “['Fargo' is] actually a very comic movie, and if I did the tone of the movie exactly, people would think I got it wrong because it would be too comical,” Hawley told Salon at the red carpet. Though there was a voice coach on set, Hawley "downplayed" the famous Minnesota accent, which “became a caricature after the movie.”

Hawley describes the show as a mashup of another Coen brothers classic, “No Country for Old Men.” “I would say we were making 'No Country for Old Fargo.' It has more of that narrative drive -- I wouldn't say serious, but grounded in that way,” he explained. “You know, because you want to be afraid of those characters. You want to really take on the consequences of what happens in those first two hours over the course of the series.”

Thornton was the first actor to jump on board. "The script of the pilot was so strong that it wouldn't have mattered if it was based on a movie or not-- it was still a really great script,” Thornton said. “You could change the name to 'Houston,' you know, and you wouldn't know the difference. It has the tone of 'Fargo,' but it's really its own animal." Thornton admitted that he barely watches any current TV shows, but added that he’d like to appear in “30 Rock.” He was sad to hear that it was not still on the air. “Coming from the film world, I want to stick with movies,” Thornton told Salon, but, he added, like a grizzlier Alan Sepinwall in cowboy boots, "Television's doing so many exciting things now, it's actually become another form of the movie theater.”