Paul Ryan’s phony existential drama: How a P.R. stunt took on a life of its own

Stop saying there's a "new" Paul Ryan. It's all part of a big con that he's pulled before. And we know how it ends 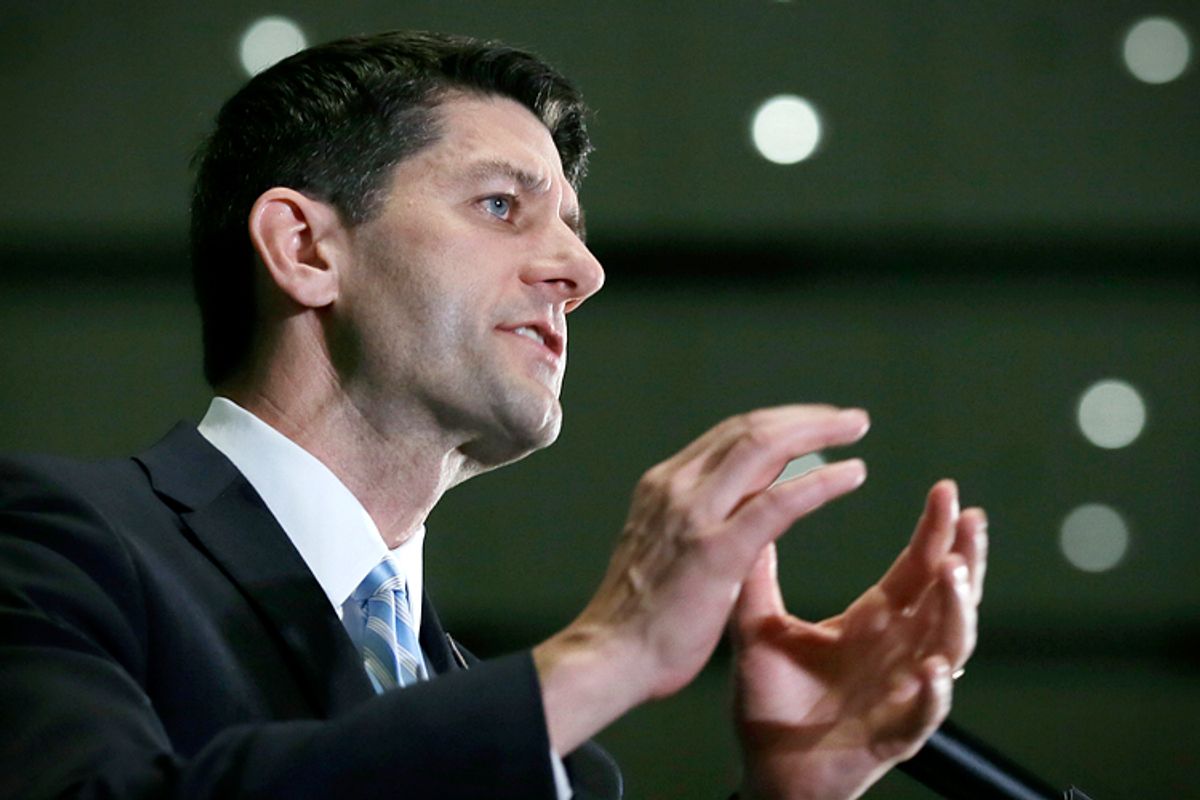 Paul Ryan is having his Hamlet moment, it would seem. The Wisconsin Republican is pacing back and forth on the political stage, agonizing over whether he’ll stick true to the budget "wonkery" that’s defined his congressional career to date or whether he’ll dive into his newfound passion for the poor. Add into all this the pressure to run for president in 2016, and you have quite the existential drama.

Whatever. Ryan can wring his hands all he wants, but I’m getting increasingly frustrated with watching reporters help him with this P.R. stunt. You can’t talk about how Ryan is "transitioning" from budget wonk to Jack Kemp-inspired champion of the poor as if they’re discrete chapters of the Paul Ryan saga. It's better to think of Paul Ryan's entire career to date as being focused on the poor, and how he's used the budgeting process to try to impose devastating cuts in social programs as a panacea for the economic ills facing impoverished Americans and the country at large.

But reporters have been using the "new Paul Ryan" language for months. The Washington Post got the ball rolling last November: "Paul Ryan is ready to move beyond last year’s failed presidential campaign and the budget committee chairmanship that has defined him to embark on an ambitious new project: Steering Republicans away from the angry, nativist inclinations of the tea party movement and toward the more inclusive vision of his mentor, the late Jack Kemp." Here we are several months later, and the transition is still ongoing. "Keep an eye on Ryan," wrote Robert Costa of the Post earlier this week, "who is undecided on his political future, as he recasts his political persona, moving away from being the budget-cutting wonk of 2012 and embracing the model of his late mentor, Jack Kemp, who was once the GOP’s leading voice on poverty."

Politico observed that Ryan is asked all the time about his potential bid for the White House, but "he prefers to talk about his agenda to cure poverty." That’s true enough, insomuch as Ryan probably does prefer to talk about that "agenda." What’s missing is the actual agenda. As of right now it doesn’t exist. Last month he released a report laying out which portions of the social safety net he’d like to shred, only to have the economists and think tanks he cited in that report chastise him for misrepresenting their work.

Ryan dropped heavy hints that his new policies and vision would be included in the latest and last version of his budget proposal, but he ended up punting until sometime later this year. Ryan’s brain trust seems to think we might see something by the summer, maybe. That may happen, then again he may decide that a new raft of policy positions shortly before the midterms would be a bad idea. Either way, he’ll keep stringing reporters along, getting them to write stories about Paul Ryan: the Republican who cares about the poor.

That is all part of the Ryan playbook. Shortly after Mitt Romney tapped Ryan as his 2012 running mate, the New Republic’s Alec MacGillis wrote a great piece examining why it was that official Washington fell in love with Paul Ryan’s current political persona, that of the “wonk.” Basically, Ryan figured out that if he could demonstrate even a basic familiarity with budget issues, it would set him apart from the rest of his Republican colleagues. “Washington now finds itself highly susceptible to doe-eyed young men brandishing graphs,” MacGillis wrote. “What these ‘wonks’ propose doesn’t even have to add up or be scorable, as the case may be with the Ryan budget, because people who lack much policy knowledge themselves regard those who have it with a reflexive awe.”

Ryan is basically running this same con again. After decades of supply-side economics, upper-income tax cuts, and anti-estate tax activism, the Republican Party is widely and rightly viewed as the party of the rich. Ryan has been an enthusiastic supporter of each of those policies, but in the post-Romney, post-“47 percent” political world, a Republican who can convincingly demonstrate concern for the poor would be a rare animal. That’s the space Ryan wants to inhabit.

Getting there requires reporters, pundits and everyone else to forget that “wonky” Paul Ryan authored budgets that imposed massive, catastrophic cuts on Medicaid, SNAP, Pell grants and basically every other program that aids low-income Americans so that he could cut taxes for the wealthy. That’s the story of Paul Ryan’s political career, and reporters shouldn’t help him obfuscate that as he tries to carve out a new political identity.