In his wingnut bubble, the last thing any Republican should want is for everyone in the country to vote. Here's why 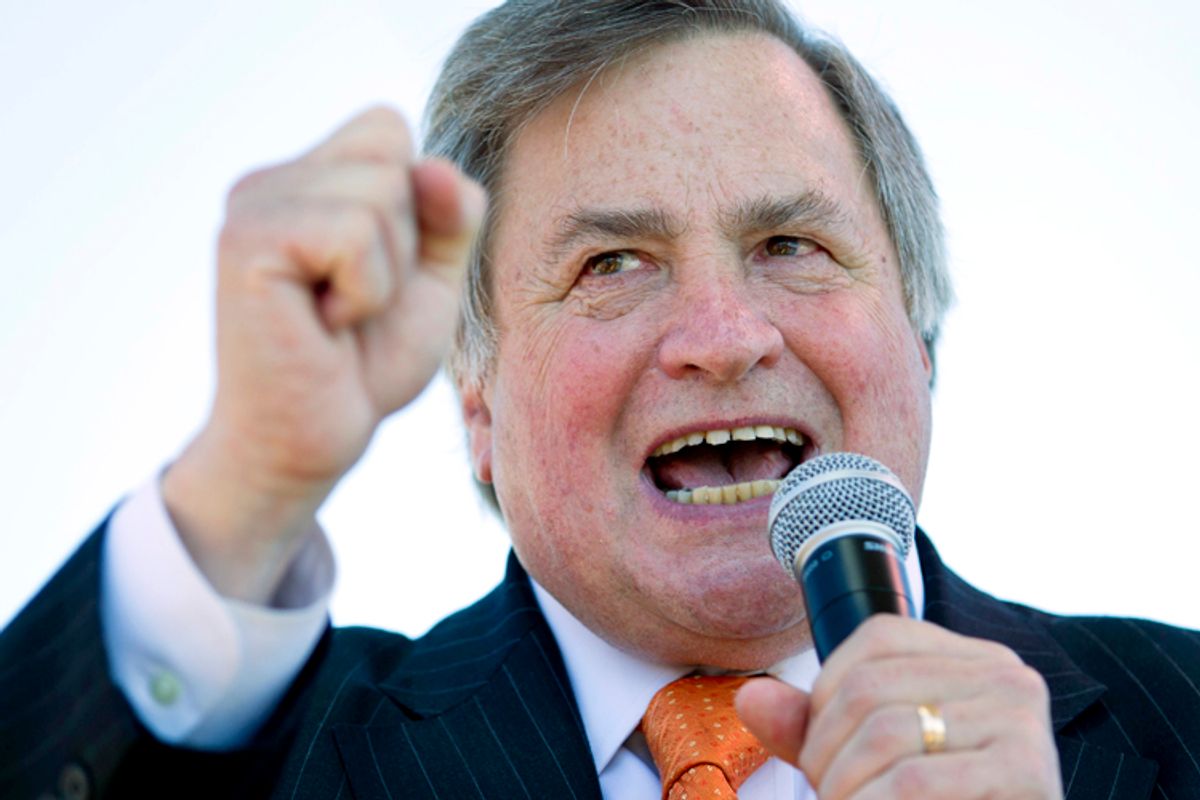 It is widely acknowledged that Dick Morris is the worst pundit in America. It's truly not up for debate. He's so bad that even Roger Ailes was embarrassed by his hilariously wrong predictions in the 2012 election and let him go. (Karl Rove was said to be similarly fired but turned back up on the network almost immediately. Morris did not have his contract renewed.) But Morris is the quintessential "wingnut welfare" king, a man so entrenched in the right-wing infrastructure that it literally doesn't matter how wrong he is about everything, he will continue to be gainfully employed as a pundit by someone. And his stock is sure to rise if Hillary Clinton runs for president --- he's made a tidy profit for years riding on his rep as a Clinton "insider" from back in the '90s, regardless of the fact that he is, of course, always wrong about everything.

Morris is best understood as the top pundit in DC Comics' Bizarro World of Htrae, a cube-shaped planet in which everything is opposite of what we know as reality here on Earth. (Opposite of Htrae, get it?) Take his latest offering in upside-downism: He claims that in their latest nefarious vote fraud scheme, George Soros and his Democratic minions are preparing to steal elections from Republicans by having states adopt the national popular vote to determine electors in the Electoral College.

Yes, you read that right. Using the national popular vote to determine who wins the presidency would be stealing elections. Let that sink in for a minute.

Here's a short explanation of this shocking ploy to usurp American democracy from FairVote:

The purpose of NPV is to guarantee election of the presidential candidate who receives the most popular votes in all 50 states and the District of Columbia. It creates an agreement among states to award all of their electoral votes collectively to the presidential candidate who wins the national popular vote once the participating states together hold a majority (currently 270 of 538) of electoral votes. The choice for legislators is straightforward: passing NPV will guarantee election of the national popular vote winner once the compact has been joined by enough states to make it decisive for determining the outcome of future elections. Until that point, a state’s current rules apply.

The Electoral College distorts presidential campaigns and our democratic system in ways that could never have been predicted by the founders. (And even if they were, that doesn't make it right.) For a list of many of those distortions, click here.  From the concept of "faithless electors" to the unequal voting power apportioned to places with fewer people, the degree to which it perverts the simple notion of one person one vote, is astonishing.

Morris will undoubtedly be very disturbed to hear that just two days ago the state of New York officially joined the compact:

The New York Senate passed NPV in both 2010 and 2011, and the House passed it once in 2013. This year, however, both chambers passed the bill by very wide margins on the same day – during the same hour in fact! In the Senate, sponsoring Sen. Griffo led the floor debate before he and his colleagues passed the bill 57-4. In the Assembly, sponsoring Asm. Dinowitz and his colleagues discussed why National Popular Vote was the right call for New York before passing the bill 102-33. A majority of Democrats and Republicans in both houses voted in favor of a national popular vote for president.

According to Morris, the Republicans who voted for this anti-democratic agreement to allow the actual winner of a presidential election to become the president just aren't thinking this through.  You see:

Democrats usually see a smaller percentage of their people go to the polls than Republicans do.

Under the electoral vote system, they figure why beat the drums to get a high turnout in New York City when the state will go Democratic anyway? But if it’s the popular vote that matters, the big-city machines can do their thing — with devastating impact.

Clearly, the last thing any Republican should want is for everyone in the country to vote. How are they supposed to win? (And needless to say it's those "urban" precincts --- if you know what I mean --- where they'll pad the popular vote and steal the whole thing.)

Morris, the best pundit in Bizarro World, put away the argument with this scathing indictment of the Democrats:

The popular vote is what the Democrats do best. Fighting them on it is, in Winston Churchill’s words, “like going into the water to fight a shark.” Republicans need to kill this proposal and they better get busy doing it.

I'll say one thing for him, when he's right he's right.