GOP's new class of jokers: Meet the "rising stars" of the dumbest rebrand ever

Welcome to the lamest reinvention in modern history. Why these "young guns" are just as scary as the old male ones 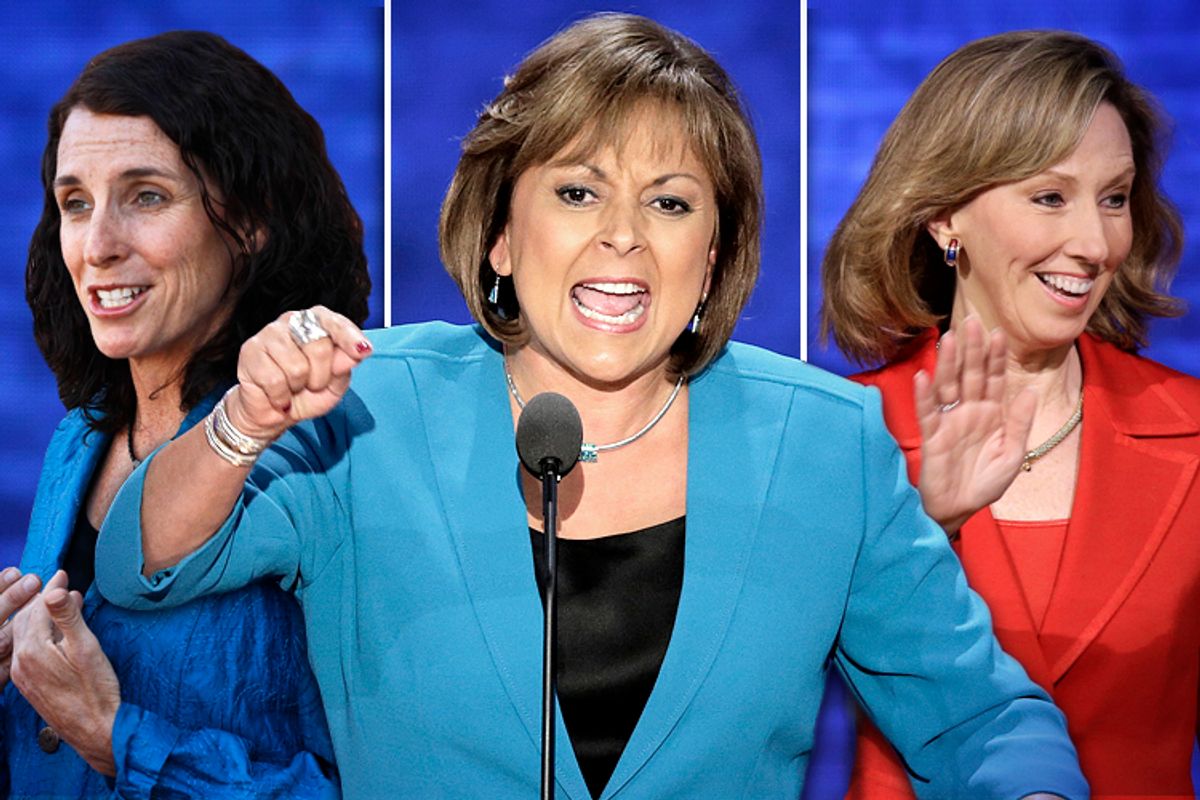 To answer the questions Andy Kroll raised in his Wednesday Mother Jones piece exposing New Mexico Gov. Susana Martinez as a terrible shithead -- yes, Martinez probably is the next Sarah Palin. And yes, Martinez is also, as Kroll points out, probably the next Chris Christie. Which is to say that she is currently being floated as a great savior of the Republican Party, even though she is terrible.

But while Martinez and some of the "young guns" being scouted by the National Republican Congressional Committee may make for some more demographically representative campaign ads, the policies they have built their careers on are pretty indistinguishable from the sea of white men who have been driving the GOP into the ground. And it's these policies that matter most to the politically engaged and highly motived voting blocs -- unmarried women of color, in particular -- who are shaping contentious elections and whom the GOP so desperately want on its side.

A Wednesday report from Politico more than bears this out. While the assault on reproductive rights has certainly galvanized women voters, as Stanley Greenberg and Erica Seifert note, the economy and the social safety net are energizing them, too:

With women Democratic leaders in the House and the U.S. Senate taking the lead, we began to examine the surprising impact of focusing like a laser on the economy and advancing an economic agenda for working women. This agenda is popular among all voters, but it is especially powerful among unmarried women. Hearing that agenda increased the support for a Democratic candidate on our surveys, but much more important, it greatly increased their likelihood of voting.

[An agenda focusing on equal pay, family leave, the minimum wage and the social safety net] increases unmarried women’s likelihood to vote and increases the chance that they will vote for Democrats. In our surveys, after hearing this agenda and also the best policies and messages from Republicans, the two-thirds of unmarried women who say they were almost certain to vote increases to 83 percent. That math could make the difference in November.

Let's dispense with Christie here -- partly because his whiteness and his maleness kind of disqualify him from the "rebrand" the GOP is going for and partly as wishful thinking that his presidential aspirations are legitimately dead -- and look at where Martinez and some of the female "young guns" being touted as the bold new direction of the party stand on the issues that have alienated so many from the GOP.

Democrats in recent months have been hammering Republicans hard on the minimum wage and equal pay, and it's an issue on which Martinez has a mixed record. In March, she vetoed a bill that would have raised her state's minimum wage to a meager $8.50 an hour. Defending her veto, Martinez chided state Democrats for trying to raise the $7.50 minimum by a whole dollar instead of the 30 cent increase she was in favor of. "I was clear with lawmakers that I support an increase in the minimum wage in New Mexico -- one that would put us on a level playing field with neighboring states,” she said at the time, noting that because Arizona pays its workers poverty wages, New Mexico should pay its workers poverty wages.

And while Martinez did sign an equal pay law passed by the Democratic-controlled Legislature, it hardly gets her out of the "war on women" weeds or makes her an ally to working women. In a measure that was both offensive to mothers and victims of sexual violence (and bizarrely embraced the Todd Akin/Paul Ryan "forcible rape" talking point at its most toxic), Martinez proposed a measure to require women in New Mexico to prove that their sexual assault qualified as “forcible rape” if they wanted childcare assistance for a child born as a result of rape. (After an outcry from advocates in the state, Martinez withdrew the language.)

The "Young Guns" -- a GOP recruitment program that categorizes its most promising candidates into "contenders," "on the radar," and "young guns" -- don't fare much better. Virginia delegate Barbara Comstock, currently running for Congress and considered "on the radar," called equal pay measures a "left-wing agenda," and denounced the Lilly Ledbetter Fair Pay Act as "partisan." When debating access to later-term abortion in her state, Comstock declared there was "never" a health reason that a woman would need such a procedure. (This is totally and completely false.)

Arizona "young gun" Martha McSally, currently running for a United States House seat, wants to allow employers to deny their female workers birth control, and -- like most of her GOP contemporaries -- couches her defense of gender rating in insurance in the language of "religious freedom." Mimi Walters, a "contender" in California, doesn't support the inclusion of maternity coverage in health insurance. (How pro-family of her.) Utah "contender" Mia Love defended her party against the "war on women" label by arguing that the GOP -- despite working feverishly to defund Planned Parenthood and roll back access to basic reproductive health services across the country -- was the party of "choice," because it wants "more free choice and more liberties" for all.

The names and faces may be unfamiliar to national audiences, but the policies are exactly the same. The hype around Martinez is following the same script that managed to convince the country that Christie is a "moderate." The "young guns" are more of the same: an army of women who are beating the drum against reproductive rights, fighting equal pay in the states and pulling moves from the same tired playbook.

If it wasn't such a cliché, I'd say something here about the GOP and the very definition of insanity.

If the party wants to stop its nose dive at the polls with all but an aging population of white voters, they should maybe try to find some candidates whose views and agendas aren't so disdainful of and hostile to the voters they need to survive. It may also want to stop hailing bridge-burning assholes as the future of the GOP. That might help, too.