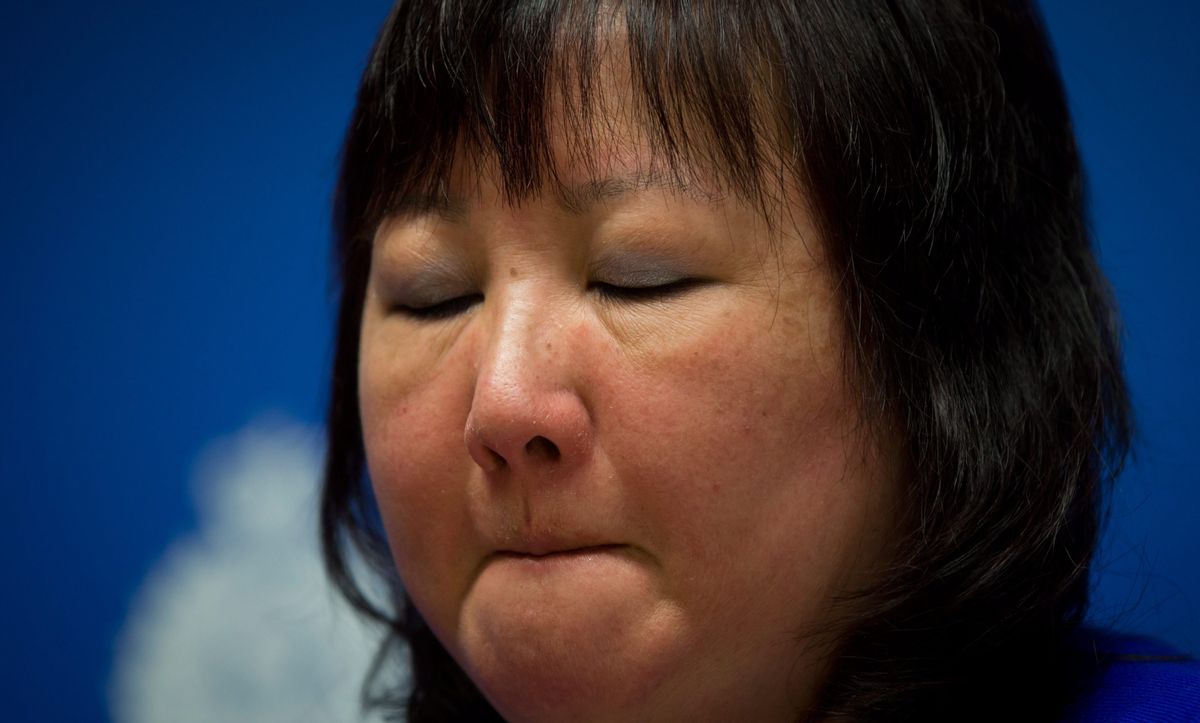 Carol Todd fights back tears as she listens during a Royal Canadian Mounted Police news conference in Surrey, British Columbia, on Thursday, April 17, 2014. A 35-year-old man alleged to be involved with the online extortion of Todd's 15-year-old daughter, who committed suicide in 2012, has been arrested in the Netherlands. (AP Photo/The Canadian Press, Darryl Dyck) (AP)
--

VANCOUVER, British Columbia (AP) — Canadian police confirmed Thursday an arrest has been made in the Netherlands in the case of a Canadian teenager who was blackmailed into exposing herself in front of a webcam. The 15-year-old later committed suicide after detailing her harassment on a YouTube video watched by millions around the world.

Royal Canadian Mounted Police Insp. Paulette Freill said a suspect has been arrested in the Netherlands and charged with extortion, luring and criminal harassment and possession of child pornography for the purpose of distribution. The 35-year-old man has been identified under Dutch privacy laws only as "Aydin C."

Freill declined to release specifics of the case but said there were other victims in Canada and internationally. Dutch prosecutors said the man is suspected of blackmailing girls in the U.S., Britain and the Netherlands. Canadian police said they would seek extradition.

Amanda Todd brought the problem of cyber bullying to mainstream attention in Canada after she posted a video on YouTube in which she told her story with handwritten signs, describing how she was lured by a stranger to expose her breasts on a webcam.

The picture ended up on a Facebook page made by the stranger, to which her friends were added.

She was repeatedly bullied, despite changing schools, before finally killing herself weeks after posting the video. It has now been viewed more than 17 million times.

"This is truly a day we have been waiting for," said Carol Todd, Amanda's mother. She wiped away tears as she thanked police.

Dutch prosecutors said they filed indecent assault and child pornography charges against the man. Lawyer Christian van Dijk earlier confirmed to The Associated Press that one of the charges against his client involved a 15-year-old girl from British Columbia.

Aydin C., who has dual Dutch and Turkish nationality, has been in detention since he was arrested in January in a vacation house the town of Oisterwijk. He lived alone, and has no wife or children.

Prosecutors first publicized his case after a preliminary hearing Wednesday at which his detention was extended for three months.

"The suspicions against the man are that he approached underage girls via the Internet and then seduced them into performing sexual acts in front of a webcam," prosecutors said in a statement.

"He is suspected of subsequently pressurizing them to participate in making new material."

They noted Aydin C. is also thought to have blackmailed adult men in a somewhat similar way, by convincing them that he was an underage boy, convincing them to perform sexual acts on camera, and then threatening to turn the images over to the police.

Lawyer Van Dijk said he doesn't believe prosecutors have sufficient evidence to convict his client, and said that even if there is evidence of unlawful activity on his computer, it may have been hacked.

"Prosecutors seem to think they have a big fish here, but if I see the evidence, it's not much," he said. "Lots of references to IP addresses and such."

Dutch prosecutors said they were cooperating with other national authorities, including the British.

Van Dijk said U.S. and Norwegian authorities are also involved in the case.

He said no country has sought to have his client extradited, and so far Aydin C. hasn't entered any plea.