From a pink dinosaur to "Gay Tony": The evolution of LGBT video game characters

Since the scandalous lesbian virtual romances of the '80s, LGBT characters in video games have come a long way 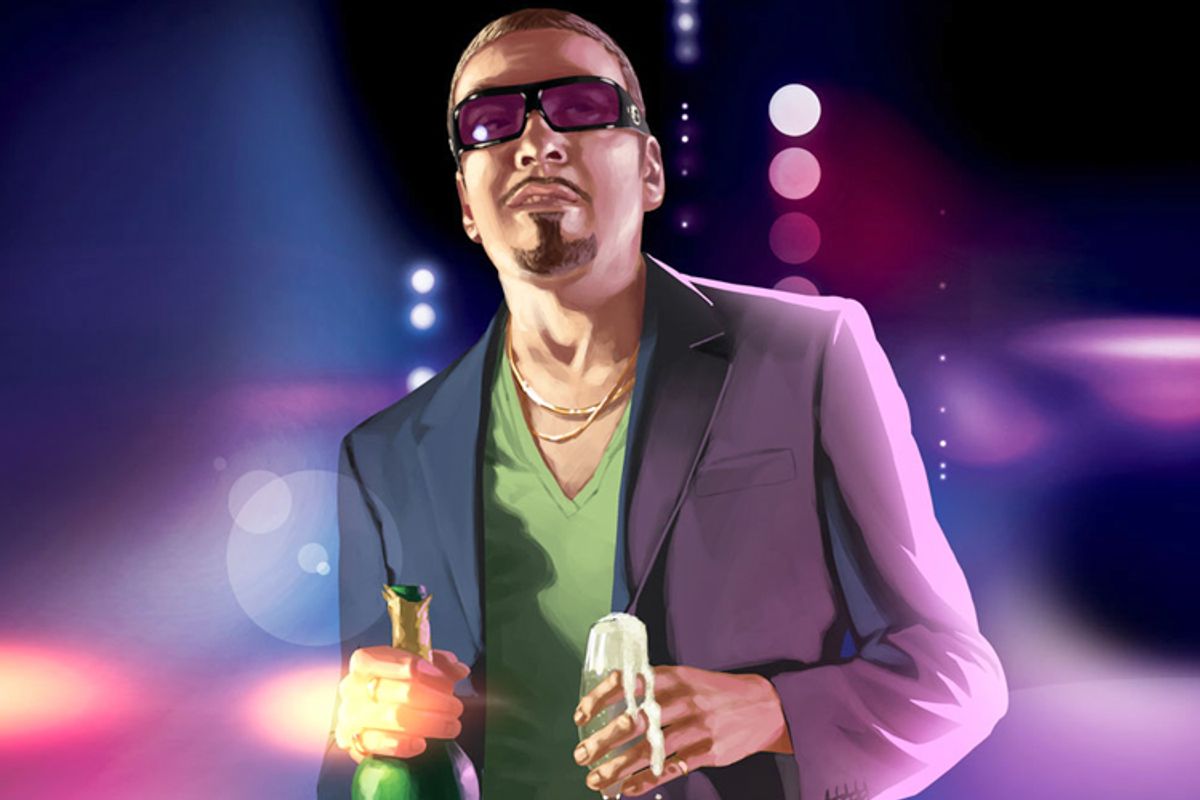 Last year, two groundbreaking new video games arrived on the scene: "Gone Home" and "The Last of Us." And the most singular thing about them was hard to miss: They featured two prominent, three-dimensional LGBT voices. More than a few people cited this as a sign of the times, proof that video games are growing up right before our eyes. And to a certain extent, that’s true. In 2014, games have never been more complicated or more expressive, and the industry is increasingly becoming a more inclusive space. But the road from cartoonish, even offensive LGBT characters to today's nuanced, realistic ones has been a very long one. Video games have been exploring sexual orientation for decades. It hasn’t always been pretty or elegant, but it’s always been there, even if under the surface. We begin here, in a detective text adventure released in the mid ‘80s, where you, the gumshoe, encounter a woman who’s deeply jealous after her girlfriend got married to a man. Not exactly the most auspicious or heroic introduction of LGBT characters to the world of video games, but hey, it was a start. Planting early seeds that eventually video games weren’t just toys.

"Caper in the Castro"

This is one of the most interesting, and perhaps the hardest to track down. In 1988 a programmer named C.M. Ralph released his self-programmed LGBT-themed puzzle game for Apple computers. The game was distributed on the underground LGBT forums of the late ‘80s and early ‘90s. Outside of that, not much else is known. But it’s safe to say that C.M. Ralph, whoever he was, was one of the earliest LGBT voices in games. Perhaps our most problematic entry on this list is Birdo, from "Super Mario Bros. 2." Birdo is a pink dinosaur with a bow, who essentially serves as the recurring boss throughout the game. In the manual it’s stated that “he thinks he’s a girl,” and would rather be called “birdetta.” Thus making her (hatefully, unfortunately) the first ever transgendered representation in video games. We’ve come a long, long way.

The "Final Fight" series is still alive and kicking, and so is Poison, the pink-haired transgendered woman who’s been a staple of the series since its debut in 1988. She’s even scored an appearance in the upcoming "Street Fighter 4: Ultra."

"Rise of the Dragon"

"Rise of the Dragon" is not one of Sierra’s best-known adventure games, but it still carries something of a cult following. It’s a noir-ish, cyberpunk-y detective story that also features a section in a “pleasure dome,” where you’ll meet a woman, posing as a man, posing as a woman.

Laura Bow in "The Dagger of Amon Raw"

Another Sierra adventure game, another journalist/detective/ne’er-do-well encountering two women in a secret love affair. It is interesting how these early games were so fixated on lesbianism; I don’t think we’ve seen an openly acknowledged homosexual male relationship yet on this list. In "The Dagger of Amon Raw," Laura Bow stumbles across said love affair, as well as a speakeasy prostitute who apparently goes both ways. Baby steps, I suppose.

This may be our first appearance of a classic RPG in this list. The Ultima series is the granddaddy of all hardcore Western American computer fantasy, so it’s fitting that they’d be the first to break the genre into LGBT territory. The encounter is somewhat rudimentary – during your journeys you’ll encounter a bisexual mage who will proposition the player character, regardless of their gender.

"Dracula Unleashed" might mark the first time in video games where a homosexual man was given a speaking role. Unfortunately, the game portrayed him as a barely contained pervert, constantly shooting lecherous gazes at the player character, but it is still the first.

In which the long-standing adventure franchise takes you to a gay bar to figure out what happened to your murdered police partner. Eventually you uncover that he was a cross-dresser at a transgender bar somewhere in Hollywood.

"Chrono Trigger" is considered to be one of the greatest RPGs of all time, and it also featured Flea, an antagonist of dubious gender who unleashed the immortal line, “Male or female? What difference does it make? I’ve got the power and power is beautiful.” Words to live by.

"The Orion Conspiracy" has the honor of being the first game ever to use the word “homosexual.” Devlin McCormack is on a quest to discover who murdered his estranged son Danny, when he discovers he was living with a lover named Steve Kauffman. It’s a humanized, honest and surprisingly gentle moment in an era wasn’t exactly known for its empathy.

"The Beast Within: A Gabriel Knight Mystery"

"The Beast Within" is rightfully hailed as one of the best adventure games of all time, and that has a lot to do with the antagonist, Baron Von Glower. An intelligent, perceptive man with a slight romantic interest in Gabriel Knight. He still stands as one of the greatest villains in video game history.

"Phantasmagoria 2: A Puzzle of Flesh"

Roberta Williams, designer of "Phantasmagoria 2," was always a bit of a provocateur, so it makes total sense that she’d be the one to break through barriers. You play Curtis who develops feelings for Trevor, his gay co-worker. Eventually they kiss. It’s not developed to be a seduction or a huge face turn, just a part of a complicated man’s life. It’s also the first time in video game history where a player character engages in open homosexual behavior.

"Fallout 2" has the honor of being the first game with a gay marriage. Yep, as the player character you can marry someone of the same sex. Sure, it’s played for comedic purposes, but it is still a first nonetheless.

"The Longest Journey" has earned many accolades for its storytelling and world building, and it’s earned Swedish developer Funcom something of a cult following. But it also presents an elderly lesbian couple and a gay cop as human characters operating unremarkably in a larger world. Even "The Longest Journey’s" secondary stars were ahead of their time.

As we will see down the line, most modern RPGs take a pretty laissez-faire approach to homosexuality in games. "Star Ocean" might be the first of its kind, with its willingness to let the player date whomever they want regardless of gender.

In "Final Fantasy IX" you’ll meet Quina Quen, who comes from an ungendered race called the Qu. Throughout the narrative, Quen is given the pronoun “s/he.” This perhaps marks the first instance of a game engaging with pansexuality.

"The Sims" broke in the 21st century with almost no restriction on how you wanted to pilot your virtual family. It still stands as a very LGBT-friendly franchise.

As well as being one of my personal favorite games of all time, "Knights of the Old Republic" also marked the debut of Juhani, a female Jedi who can engage in romantic relationship if the player character is female. This is notable, because it also makes Juhani the first openly LGBT character in the "Star Wars" universe.

"Jade Empire" is another RPG developed by Bioware, this time borrowing a mythical, semi-imagined version of ancient China. You can play as either a male or female, and find yourself in a relationship with all sorts of people in your party. Sky, Silk Fox and Dawn Star all exist in a happy, loosely defined sexuality. I’ve always been particularly interested in how Bioware has remained so consistently casual when invoking LGBT voices.

It seems weird to pick a favorite LGBT character, simply because that seems a little cloying, but I’ve always really appreciated Kanji from "Persona 4." He’s a tough guy with a bullet necklace, but he also fancies boys a little bit. You, the player character, help him accept that, but your friendship goes far beyond any therapeutic purposes. By the end of the game you remember Kanji as your friend, not a kid in the closet.

Despite Gay Tony’s name being, well, Gay Tony, his character arc in this "Grand Theft Auto" story is barely fixated on his homosexuality. Gay Tony is a nightclub owner in Liberty City, and he’s got a lot of debts to pay. Rockstar hasn’t always been the most empathetic developer, but they’ve rounded out their protagonists with a lot of purpose. Gay Tony will be remembered as a human being more than anything.

"Don’t Take It Personally Babe, It Just Ain’t Your Story"

The rise of indie development has let a lot of people express themselves in a way that the mainstream industry might not allow. Take Christine Love, who made an interactive story where you, a high school teacher in the future, has the secret ability to read all the texts and Facebook messages exchanged by your students. You teach a class, and watch a few LGBT romances develop in real time.

After years and years of dodging the question, Bioware finally let players make their Commander Shepherd gay in the third game of the series.  It still sorta feels like a huge breakthrough.

This is another indie gem, this time from Anna Anthropy, a trans woman who was unafraid to express exactly how gender dysphoria affected her, and her journey through hormone replacement therapy. "Dys4ia" is a simple flash game, but it really helps a layman understand the frustrations that inevitably surround a difficult process.

"Gone Home/The Last of Us"

Smart, resourceful and utterly memorable, Sam and Ellie -- two teen girls who loved two other teen girls -- stand as some of the best characters in the history of interactive entertainment. Their homosexuality was not paved over, but it never defined them, either. If these two are the latest to grab the torch, we know we’re headed in the right direction.